Chocolate, Watches, Army Knives and a Lot of Other Stuff You Can't Afford (unless you also have a secret bank account here)--Zurich (March 29)

Rosa and I left Spain early in the morning and arrived in Zurich around noon.  Since we didn't depart for Israel until 10:45 pm, we had the day to explore the city.  I'd hoped to get up into the Alps as a kind of preview of Nepal, but Zurich is a good distance from the mountains, so we decided to just stay in town and do a walking tour.
The old heart of Zurich is charming, similar in ways to Amsterdam and, I suppose, many other northern European cities.  Quite different from Mediterranean nations like Spain and Italy and, for that matter, Israel.  Here, the world is greyer, much more efficient and business-like, and also more polite.  The first thing that Rosa and I both noticed is that people actually stop for you when you cross the streets.  That was a relief.  At lunch we walked into a pastry shop, which was mobbed.  Yet two men in their thirties--partners, I think--both immediately offered us chairs at their table and shared their stories and their chocolate.  They gave us some thoughtful advice on where to walk, what to see--and offered it in such an urbane, finely-mannered fashion.  Very Swiss.
Our walking tour included one of the Zurich synagogues.  It was closed when we arrived, but was handsome in a stolid sort of way, much like the big churches in town.  After being in Catholic Spain, one understands the Protestant Reformation better.  The churches here reflect that history, and they are quite simple and restrained--so different from the Spanish baroque. Interestingly, one of them has stained glass windows designed by Marc Chagall.  Unfortunately, it, too, was closed.
The weather was very chilly and damp all day, so we stopped at numerous occasions for pastries and hot drinks.  For this, we paid dearly.  Switzerland must be the most expensive nation on earth. Surprisingly, they use francs instead of euros, so we had to change money again.  It didn't go far.  One Swiss franc is worth just a little more than a dollar--and to give you an idea of the prices, a Big Mac costs twelve francs.  We didn't have one of those!  But our pasta lunch cost eighty dollars and two hot drinks at Starbucks ran to $16.  I could go broke in a week here. Fortunately, for the wallet at least, we only had a day.  And we spent all of our remaining change on wonderfully creamy chocolate bars.
At nightfall, we headed back to the airport and caught our flight to Israel.  More on that to come.
Posted by dan at 1:18 PM No comments:

On the recommendation of my Aunt Wendy and Uncle Larry, I spent most of my free day in in the Museo Thyssen-Bornemisza, a world-class art museum right across the street from the Prado.

From Sevilla, we drove upstream along the Rio Guadalquivir to .  Here, as in , Ronda, and all of the other ancient cities we have toured, the streets are both narrow and labyrinthine.  The guidebook that I purchased aptly notes, “The streets have, from Moorish times, changed their routes according to the needs of the houses and their residents rather than imposing their will on the whole shape of the city. . . They seem to be designed especially for visitors who are in no hurry, and their twists and turns increase the pleasure of strolling and observing.”  Indeed—and what an essential lesson in urban planning, especially for Americans, as we tend to be so focused on the destination that we miss the journey.

Ferdinand the Bull and the Reconquista--Ronda and Sevilla (March 25) 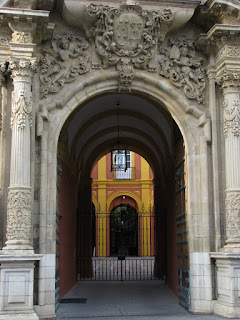 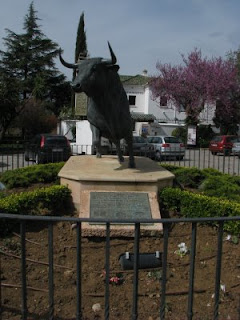 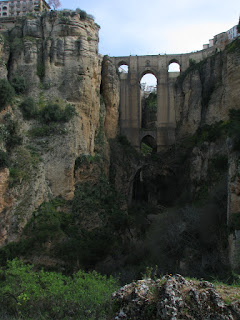 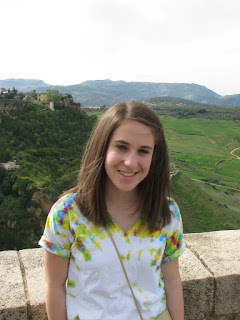 We began our morning with a very windy drive into the mountains to the town of Ronda, which is known as the capital of los pueblos blancos, “the white towns” that are nestled high in the Anadalusian hills.  It is an extraordinarily beautiful place, reminiscent of Tzefat, with crisp mountain air, winding streets, and charming houses.  Here, the buildings are all white-washed, with red terra cotta roofing.  A river divides the town into two parts, and it runs through a deep canyon, traversed by an elegant and very high old bridge.  Shops and cafes line the gorge.  This would be a wonderful place to come for a few weeks, to write and enjoy the scenic, relaxed pace of life. 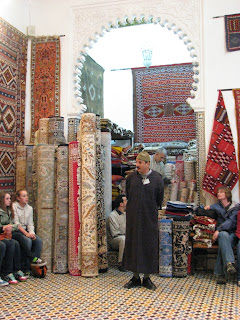 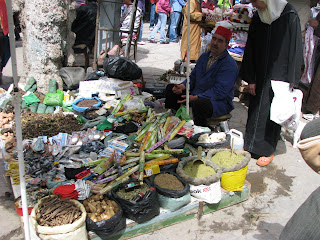 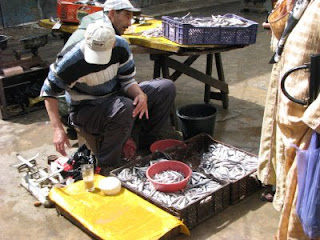 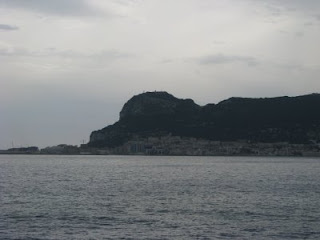 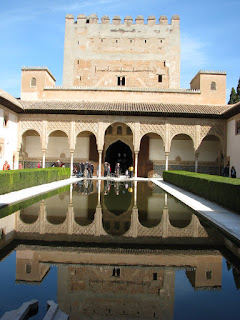 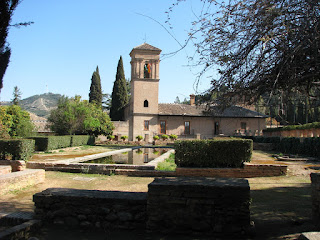 We spent the first half of the day at the , the Islamic fortress of al-Andalus.  It was a palace, a fortress, and a small city, housing over two thousand people at the height of its glory.  Its name means “the red one,” referring to the red local stone from which it was constructed in the 13th and 14th centuries.  It was the last Muslim stronghold on the , falling in 1492.  The sultans of lived there, along with their harems, advisors, entourage, and soldiers.

Into Andalusia--Toledo and Grenada (March 22) 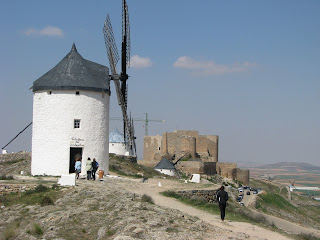 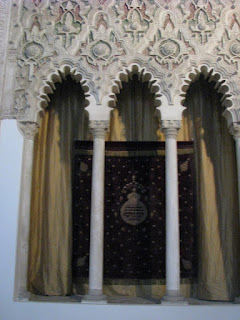 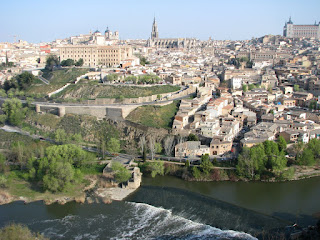 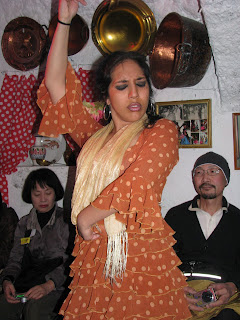 We began the day driving to , about an hour from .  Approaching the city, the terrain becomes much hillier, with wide vistas.  After the extremely crowded streets of , it felt good to enjoy the open space again.


After a long series of flights, we arrived in last night and checked into our hotel.  We did a short driving tour of the city, which is both very crowded and also very graceful.

But I filled up on eggs and potatoes and loved the atmosphere of the place.  During dinner, a flamenco band entertained us, and we sang and danced along to “Guantanamero” and “La Bamba.”  Tourist shtick, for sure, but really, really fun tourist shtick!

A last blast from the Great White North (or "Take off, eh?" 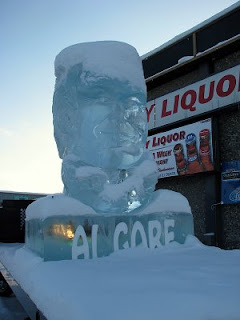 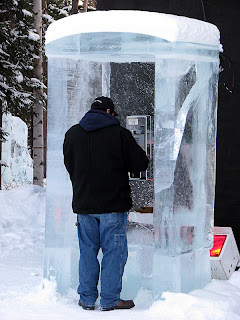 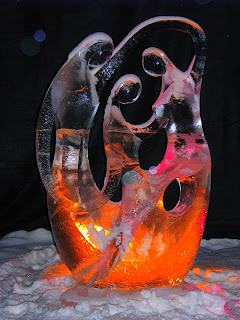 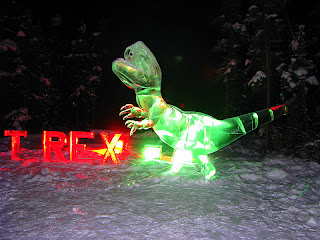 Well, I'm packing my bags and heading home early tomorrow morning.  I didn't get to see the northern lights, but upon reflection, I'm very  happy.  After all, I spent a lot of time standing alongside my car, far outside of town, on beautiful starry nights.  No aurora--but being in a beautiful wild place on a freezing night, with the dark trees all around me and a jewel of a crescent moon in the sky is pretty damn good even without the northern lights.  We spend a lot of life waiting, for so many things.  It's good to enjoy what you have even as you wait. Furthermore, this gives me good reason to return to Fairbanks to try again!
After teaching Sunday school, I went out to the Alaska Ice Park, to view sculptures that are part of the international ice carving championship, which is held here.  They are absolutely amazing--jewels of art that change with the shifting light of day.  And all the more gorgeous because they are not permanent.  I could have stayed for hours, but the temperature was below zero, and the wind was blowing hard, so even bundled up, I got very cold very quickly.  Still, I went back again later this evening to see the statues at night, when they are illuminated with multi-colored lights. It is like being in a fairy wonderland, a kind of dream, really (albeit an extremely cold dream!)
I'm attaching a couple of pictures; with time and space I could have included so many more.
The ice bust of Al Gore is NOT from the Ice Park.  It is an entirely different enterprise from the apolitical reliefs and lovely abstracts in the park.  Al Gore sits on a busy street corner in the heart of downtown, as a local citizen/ice artist's protest against environmentalists and talk of global warming.  His point, of course, is that Al isn't melting, so global warming is not real.  He even has a little sign by the statue indicating how many days it has lasted.  Hey, everyone knows that all the best science in the world is a sham, because the frozen Al Gore statue in Fairbanks in February is a much better barometer than melting ice caps and glaciers.  I'm convinced;)
In between stints at the Ice Park, I watched a film/picture show of the northern lights at the downtown theater.  Wonderful images, accompanied by classical music.  Not quite the same as being there, no doubt, but certainly the next best thing.
And so I head home with some very good memories and hopes to come back some day. The Jews here call themselves "the frozen chosen" and are very proud to be the northernmost Jewish community in the world.  It would be a pleasure to return.
Posted by dan at 11:43 PM 1 comment: