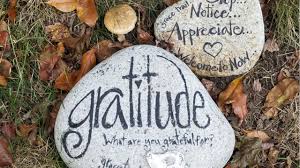 How do we live a life of gratitude?

What does the Torah have against leftovers?   Drawing on the commentator Isaac Abravanel, Rabbi Shai Held suggests that by requiring celebrants to finish the thanksgiving offering in one sitting, our portion encourages them to share the meal with friends and family.  He writes:

The nature of gratitude is such that it is inherently outward-looking. When we are moved to the depths of our being by having been given something, we seek to become givers ourselves. A grateful heart overflows. The simple requirement that there not be any leftovers from the thanksgiving offering thus teaches us a fundamental theological and spiritual lesson. We are not meant to rest content with being recipients of God's gifts but are asked to becoming givers ourselves. God's gifts are meant to flow through us and not merely to us.

In other words, gratitude and hoarding are completely incompatible.  As one of my favorite prayers in our Reform siddur, Mishkan Tefilah adds: Teach us, O God, to give thanks for what we have by sharing it with others.

The Hebrew term from gratitude—hakarat ha-tov—translates as “recognizing the good.”  We experience myriad small acts of kindness every day, but we quickly tend to take them for granted.  We forget that, as Rabbi Abraham Joshua Heschel taught, “just to be is a blessing.”  The trait of gratitude calls us to pay close attention to the gifts in our life, even—or especially—when we also experience difficulties.

This coming Shabbat is known as Shabbat Ha-Gadol, the Shabbat before Pesach.  It’s fitting that we read about the gratitude offering, as Pesach asks that we open our homes and our hearts to others. “Let all who are hungry, come and eat.”  Indeed.  To be grateful is to share.

Mussar Practice for this Week  (from Every Day, Holy Day)

This week, make a special effort to thank every person who does even the slightest thing that is helpful or beneficial to you.

Every person should hold two truths, one in each pocket, and take them out according to the need of the moment.  One should say, “The world was created for my sake” and the other should say, “I am dust and ashes.”

I have always loved this teaching but over the years, I have also come to realize that it is, like most Jewish wisdom, more complicated than it first appears.   The challenge is that the “need of the moment” is not always obvious and may, in fact, be paradoxical.  Someone who seems to be acting arrogantly—and therefore in need of the “dust and ashes” truth—may, in fact, be overcompensating for a deeply-rooted insecurity that actually calls for “the world was created for my sake.”  And sometimes when we find ourselves in the throes of depression, an awareness of our mortality—“dust and ashes”—can offer a perspective that is comforting, much like listening to the blues.  Knowing which truth to pull out at any given time is a fine—and essential—art.

This week’s Torah portion, which begins the book of Leviticus, opens with the word that bestows its name, Vayikra—God called.  It starts with the Holy One calling to Moses to teach him the laws that he will transmit to the Jewish people.  But there is an interesting anomaly in the way the word Vayikra is written in the Torah scroll.  The last letter, aleph, is inscribed in a small, undersized script, as if it were a sort of afterthought.

The Rabbis offer an abundance of commentary on this phenomenon but my favorite connects that aleph with the ego, as it is the first letter in the word anochi—“I” or “self.”  Like R. Simcha Bunam’s teaching, this reminds us that our ability to hear and respond to the call of the Divine depends on having our ego in proper proportion.  If we have too much ego, we are so full of ourselves that we leave no room for God (or anyone else).  If we have too little ego, we assume ourselves unworthy of being called in the first place, and shy away from the encounter.  We can only harken if we possess a strong sense of self that is balanced by compassion and genuine curiosity about others.

The Mussar understanding of the trait of humility—anavah—echoes Simcha Bunam’s insight that when it comes to ego, either too much or too little is problematic.  As we noted when we covered this midah earlier, in the context of the story of Noah, it is important to avoid confusing humility with humiliation, which is all too common a mistake.  Being humble does not entail self-debasement; real humility is, instead, grounded in healthy self-esteem.  As with most midot, the goal is to maintain a proper equilibrium between arrogance and self-loathing.  Humility is about occupying the proper amount of space in one’s life: stepping up when called upon to do so, while also leaving room for others.  As the contemporary Mussar teacher Alan Morinis puts it in his beautiful book, Everyday Holiness: “No more than my space, no less than my space.”  If we wish to harken to the call of the Holy One and embrace the sacred mission it demands of us, we must find that balance between dust and divinity.

Mussar Practice for this Week  (from Every Day, Holy Day)

This week, carry Rabbi Simcha Bunam’s two notes in your pocket: I am dust and ashes and the world was created for my sake.  As he suggests, take them out according to the need of the moment—and reflect carefully on which you choose each time, and why.

Countless commentators, both ancient and contemporary, have noted the literary links between the completion of the mishkan, the Israelites’ portable sanctuary-tent, described in the second part of this week’s double portion, Pekude, and the creation narrative in Genesis.  The mishkan is a microcosm, a world in miniature—a modest human echo of God’s grand design.
There is, however, a significant difference between the model and the thing itself.  With the mishkan, everything falls perfectly into place, exactly according to plan.  Later, even in the worst of times, when the Israelites rebel and fall and fail, this space remains a beautiful, safe, and secure shelter for the Divine Presence.   Would that this were true for the wider world!  As Rabbi Shai Held notes: “In reality - and according to the Torah itself - the world as we find it falls far short of God's hopes and expectations. Instead of a world in which human dignity is real, we live in a world in which barbarism and cruelty all too often rule the day, in which unspeakable suffering pervades every corner of the globe. . .”
So what do we make of the mishkan in a world so often gone awry?  Perhaps it is meant as a powerful and essential reminder of the way things were meant to be—and might yet become if we can learn to work together to create justice, compassion, and peace. As Professor Jon Levenson notes, the world is supposed to be just like the mishkan: "A place in which God’s holiness is palpable, unthreatened, and pervasive."
It is hard work to repair what is broken in the world—and in ourselves as well.  Sometimes we need to take time to renew our vision of what we are working toward.  We seek havens—sanctuaries—that remind us what we are laboring to achieve and why it matters.  Our experience of God and sacredness in brief moments and small spaces can restore our dedication to the larger effort when our faith and courage might otherwise falter.
**********
We turn—or return—to our chosen sanctuaries in space and time when we need to renew our spiritual batteries.  They help us replenish our midah of strength, known in Hebrew as gevurah. Time and again, psychological studies have demonstrated that we grow best when we focus on developing our strengths rather than repairing our weaknesses.  As Rabbi Yerucham Levovitz recognized a century ago, “Woe to those who are not aware of their defects, and who do not know what they must correct.  But much worse off are those who do not know their strengths, and who are therefore unaware of the tools they must work with to advance themselves spiritually.”
This week, consider: What are your strengths? When and where do you find sanctuaries in space and time that replenish those strengths when they are drawn down?  And how do you best employ those strengths to help bring the world as it is closer to the vision of what it might yet become?
**********
Mussar Practice for this Week  (from The Mussar Torah Commentary)
Identify people and situations where your unique strengths will bring others both help and an added measure of wholeness.
Posted by dan at 5:30 PM No comments: