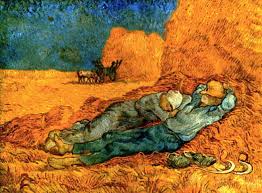 Circumstantially, the book of Exodus ends much as it begins, with the Israelites collectively toiling to build a significant structure at someone else’s behest.  As Exodus opens, we are slaves, constructing garrison cities for Pharaoh.  At its end, with this week’s portion, Pekude, we build the portable sanctuary for the God who redeemed us from Egyptian bondage.

This shift happens in less than six months.  What difference does that time make?  What is the distinction between being a slave to Pharaoh and a servant to God?  What is the point of the liberation journey if we end up laboring on both ends?

Rabbi Shai Held notes: “As slaves in Egypt, the Israelites work without respite against their will.  When they build the mishkan in this week's parashah, in stark contrast, Moses asks for voluntary contributions.  Finally freed from slavery, the Israelites are slowly being taught that there is a form of service radically different from slavery, one that honors and nurtures one's sense of agency rather than degrading it and whittling it away.”

At the heart of what differentiates service from slavery dwells Shabbat.  It is no coincidence that when Moses lays out instructions for how to build the tabernacle, he begins with Shabbat: "On six days work may be done, but on the seventh day you shall have a sabbath of complete rest holy to the Lord..." (35:2).  In Torah, work and rest are each made holy by the possibility and the presence of the other.  Without rest, even the holiest work eventually becomes drudgery.  And without meaningful work, even sacred rest soon settles into boredom.  Just as in music, we need both notes and rests to create a beautiful score, a well-lived life is defined by both sacred labor and the regular pauses that keep that labor sacred.

May all of our building—and our rest—move us, this week, toward service of the Holy One.
Posted by dan at 9:41 AM No comments:

The More We Get Together, the Happier We'll Be (Portion Vayakhel)

In recent weeks, I have been privileged to work with an extraordinary group of activists (including some wonderful fellow clergy and CABI members Jeannette Bowman and Sydney Fidler) pressing our legislature to finally add four words—“sexual orientation” and “gender identity”—that would extend basic human rights protections to the LGBT community.  Recently, our leader, the peerless activist and former Senator Nicole LeFavour, asked me to write a statement about why I am participating in this effort.  I penned a brief response, which I offer below.  Note that this week’s Torah portion is called Vayakhel, which means “And you shall assemble.” Our tradition has long recognized that we need sacred community--kehillah kedoshah--to create justice and peace.  Both the name of the parsha and my experience with “Add the Words” serve as powerful reminders of the holy labor that can only be done when we work in concert.  Or, as the old song goes, "The more we get together, the happier we'll be."

My statement for Nicole:

One of my heroes, Rabbi Abraham Joshua Heschel, marched with Martin Luther King in Selma.  Sometime later, when an interviewer asked him about the experience, Rabbi Heschel responded: “I felt my feet were praying.”

I have always taken Rabbi Heschel’s words to heart.  Why have I spent time demonstrating at the Statehouse and even getting arrested?  Because I believe that my prayers in synagogue would be empty and even hypocritical if they were not accompanied by those of my feet participating in this struggle for equality for my LGBT brothers and sisters.

Another hero of mine, Holocaust survivor and Nobel Prize winner Elie Wiesel has said: “I swore never to be silent whenever and wherever human beings endure suffering and humiliation. We must always take sides. Neutrality helps the oppressor, never the victim.”

I am inspired by the Idahoans of all faiths and of none, of all sexual orientations and gender identities, who are working so hard to “Add the 4 Words.”  It is an honor to have my feet marching, standing—praying—together with theirs.

And here's a great soundtrack for the work, from Dan Nichols: 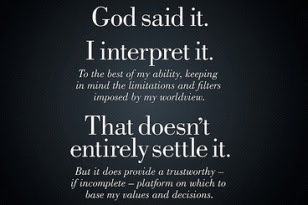 The tablets [of the Law] were inscribed on both sides, front and back. The tablets were the work of God; the writing was the writing of God, engraved on the tablets.
(Exodus 32:15-16)

I recently saw a car bearing a bumper sticker that decreed: “God said it.  I believe it.  That settles it.”

Thankfully, our tradition does not think of Torah in this way.

As this week’s portion, Ki Tissa, describes the tablets that Moses carries down from Mount Sinai, it goes out of its way to note that they were inscribed on both sides, front and back.  While one could take this literally, most of our commentators prefer to read this metaphorically.  The eighteenth century Chasidic commentary, Tiferet Uziel (by Rabbi Uziel Meizels, a student of the Baal Shem Tov) notes: “There are reasons to interpret a passage in Scripture to say ‘Pure!’ and reasons to interpret the same passage to say ‘Impure!’ and many similar cases.  This is the writing ‘on both sides.’  One person’s view may differ from a friend’s as widely as possible but ‘both are the words of the living God.’”

Both sides—directly opposing views and interpretations!—are the words of the living God!  This is the theology at the heart of Judaism.  Our tradition stridently rejects the notion of “God said it.  I believe it.  That settles it.”  For us, serious Jewish commitment and love of Torah do not entail fundamentalism.  Indeed, the roots of this notion that “both are the words of the living God” point to an imperative to respect and listen seriously to views other than our own.  The phrase goes back to the ancient Talmudic debate between Hillel and Shammai, who famously disagreed about almost everything.  The Talmud notes that in virtually every case, we follow the path of Hillel.  As Tractate Eruvin 13b famously explains: “A heavenly voice declared: ‘The words of both schools are the words of the living God, but the law follows the rulings of the school of Hillel.’”  And why does the school of Hillel win this dispute?  The text answers: “The disciples of Hillel were gentle and modest, and studied both their own opinions and the opinions of the other school, and humbly mentioned the words of the other school before their own.”

In other words, the best and truest faith is that which denies the arrogance of certainty and acknowledges the importance of understanding views other than our own.

Our Torah is written in a way—“on both sides”—that invites and encourages loving debate and respectful differences of opinion.