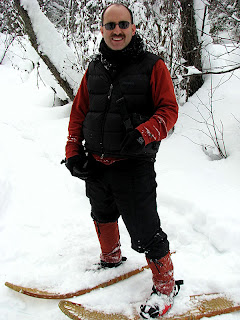 I woke to a good four or five inches of new snow.  Fortunately, Luke and Elyse, a couple from the congregation invited me out to their home in the countryside for some snowshoeing.  That was a lot of fun, and also hard work.  We took turns breaking trail and walked along a frozen creek in their back yard, which is near the University of Alaska campus.  Elyse and Luke offered some terrific conversation, too.  Luke is  planning to run for mayor this fall, and is currently sits on the county commission.  Elyse was an Alaska delegate to the Democratic convention in Denver this past summer, and her brother David serves in the Alaska state legislature.  They are, obviously, well-connected to the politics of the state, which they tell me are less monolithic than it appears at first glance, especially judging by Sarah Palin.  Until the mid-1970s, Alaska was, apparently, a Democratic leaning state.  The huge infusion of oil pipeline money changed that.  But there are still a good number of progressives, especially baby boomers who came here in the late sixties and early seventies, seeking a new way of life.
Later this evening, I spoke at the Farthest North Jewish Film Festival, after a showing of "The Counterfeiters."  There was a sell out crowd at the site, a combination bar/theater named the Blue Loon--kind of a rougher version of The Flicks, which sells a lot more beer than Charadonay.
When I emerged from the film and discussion, the snow had stopped and the night was crystal clear, so I had high hopes of seeing the aurora.  I drove ten miles out of town to an overlook on the Steese Highway.  Parked there, I ran into a lot of local teens partying.  And a night sky filled with stars and a gorgeous crescent moon.  But no aurora.  This seems to be the theme of my travels these days: no entrance into the inaguration despite my ticket, no northern lights despite a clear winter night.  Thankfully, when I get to Nepal, I'm pretty confident that the Himalayas will still be there.
Posted by dan at 5:56 PM

I have recently returned from Florida and am ready to return. Between the prediction of snow here this afternoon and looking at your pictures I prefer the warm weather. Glad you are having a good time. Too bad about the northern lights.