Walking with the Desert Fathers 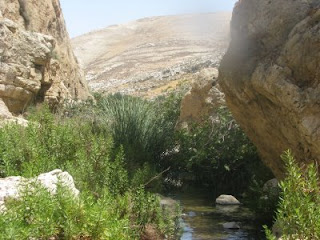 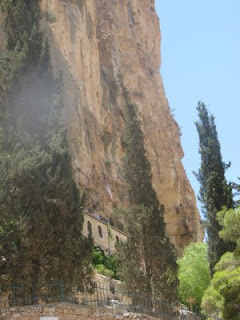 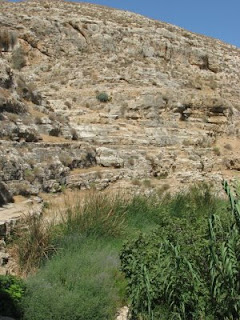 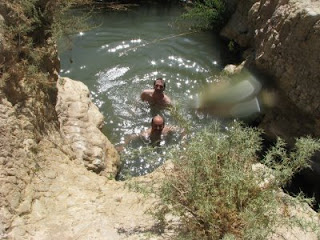 Today, Hartman gave us a break from our studies, and offered four different tours: an archaeological walk around Jerusalem, a trip to Tel Aviv to visit with Israeli business leaders from the high tech world, a look at modern West Jerusalem through the eyes of a former police chief, and a challenging hike through Wadi Qelt, a verdant stream in the West Bank, about twenty minutes from the city center. Being an outdoors-oriented guy, I chose the Wadi Qelt trip.
Leaving Jerusalem, and passing through the much-debated security fence, you enter a different world. I am a supporter of the wall, seeing it as a necessary evil. It has made a significant difference for countless Israelis, curbing terrorist attacks and suicide bombings, and thereby making it possible for thousands--including me-- to live in Jerusalem without constantly fearing for their lives. Any government's most fundamental responsibility is to see to the physical safety of its citizens, and if Israel had not built the wall, it would have abrogated that responsibility. Still, it is an ugly reality, and one does not feel good passing through it. As I have written here before, I strongly believe that Israel must find a way to get out of the territories--not because the Arabs deserve them (which they don't--they never miss an opportunity to miss an opportunity) but because being an occupying power does something rotten to the Jewish people.
Still, I must note, much of the West Bank is beautiful, in a rugged and desolate fashion. This is certainly true of Wadi Qelt, a gorgeous spring that flows through the heart of the Judean desert. We walked around, across, and through the water for about ten kilometers, following the path of a Byzantine aqueduct that once supplied water to the city of Jerusalem. The stream bed was filled with reeds and mint and many other fragrant desert plants, which stand out against the rocky limestone cliffs and canyon cut by the water. At several points, hand-holds are attached to the canyon walls, for hikers to grab while walking over narrow ledges. Early in the trip, I took a bit of a fall; thankfully, the only damage was a few scrapes and a bruised tail-bone. I was lucky. We stopped frequently to swim in the clear water, which was cool and extraordinarily refreshing on this sweltering summer day.
At the end of the trail, we came to the Faran monastery, which was established in the fourth century. It was the very first monastery created by the desert fathers, key figures in the early church, who settled here along the streambeds in the Judean desert. The cliffs are filled with caves, which once housed up to 5,000 hermits in the region. Each Sunday, they would come to the monastery for prayers and supplies before returning to their small cave-room hermitages. They spent most of their time engaged in prayer and meditation. This tradition is still alive and well; I spend a week every November on retreat at the Monastery of Christ in the Desert near Abiqui, New Mexico, and the monks there ground their daily routine on the practices of the desert fathers. There is no real parallel in Judaism, which lacks a monastic tradition. Sometimes this seems like a bit of a loss to me. I understand very well that Judaism is a communal practice, but there are, I believe, times when we all need the peace and solitude of the desert, as experienced by monks here. Perhaps as Judaism continues to change and grow, there will be more such options.
Tomorrow we get back to text study, but it sure was nice to be out today. As text-bound as our tradition is, it is essential for us to get out into the world, too. I have always believed that nature--just as much as Torah--is an expression of the divine, which we should experience and celebrate. I'm grateful that the Hartman program offered us that opportunity today.
Posted by dan at 8:32 AM