It Gets Better (Idaho Statesman column) 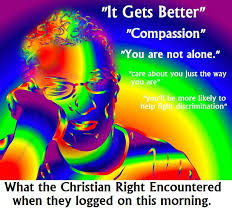 No one should be compelled to live a fearful, secretive life. This moral imperative is at the heart of the Jewish experience. Many times in our history, the oppression of the dominant culture and creed forced us to practice our faith covertly. Throughout the Middle Ages, when faced with the terrible choice of conversion or death, many Jews publicly embraced Christianity or Islam but continued to secretly observe Jewish traditions. In the year 1165, one of these “conversos” sent an inquiry to Moses Maimonides, the pre-eminent Jewish teacher of the age, asking whether he and others like him could still be considered part of the Jewish community.

Maimonides was uniquely qualified to respond. At the age of thirteen, he had fled with his family when that city fell into the hands of the Almohads, a violent Islamic sect. Drawing on this experience in his “Epistle on Forced Conversion,” Maimonides expresses great compassion for the secret Jews, recognizing the cruel injustice that created their conundrum. At the same time, he concludes that his fellow Jews who are unable to practice their religion openly must seek a new place to live: “They should leave everything they have and travel day and night until finding a place where they can live openly as Jews.” To live in hiding and shame, as victims of others’ bigotry, is to be denied one’s full humanity.

I have been thinking of this difficult part of my people’s history—and Maimonides’ response to it—in the wake of this fall’s heartbreaking rash of suicides by gay young people. The roots of this tragedy run deep. Lesbian, gay, bisexual and transgendered students are often forced into hiding by the pervasive bigotry of our culture. And who can blame them? Nine out of ten LGBT kids have experienced serious harassment at school—so much so that more than one-third of LGBT youth have, at some point, attempted suicide. This is a national disgrace: our ignorance and hate is, literally, killing some of our best and brightest students. Alas, unlike the Jewish conversos of Maimonides’ time, these young people usually do not have the option of moving to a safer place. Furthermore, at least the secret Jews could count on the support of their own families; for many LGBT young people, this is not a given.

It is, therefore, our obligation to make the world safe for these youth wherever they live, starting here in our own community. For people from faith traditions that have known persecution, our own experience should inspire us to act. Having known the burden of living a fearful secret life, we have a sacred duty to see to it that others cease to suffer this fate. Check out the “It Gets Better Project,” which was created by writer Dan Savage as a way for supporters to tell LGBT youth that it does, indeed, get better. Then do your part to make it better, speaking out for and working to create a culture in which we are all respected for who we are.