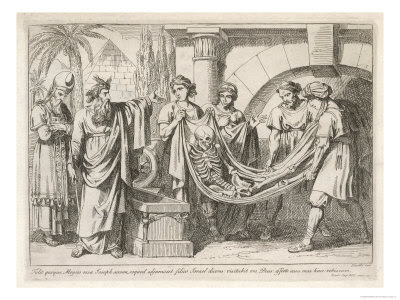 A coffin in Egypt.

This ominous phrase ends the week’s Torah portion, Va-yechi, and with it the stories of Genesis. Thus the Torah’s longest book, which opens with the creation of the world, concludes with Joseph’s death and embalming in a foreign land. Just before he passes away, Joseph makes his progeny swear an oath to carry his bones out of Egypt at the time of their future redemption. Thus, as Rabbi Harold Kushner notes, the scene foreshadows events soon to come in Exodus: enslavement, the murder of the Hebrew babies, and the birth of Moses, who will be rescued after floating in a coffin-like basket on the Nile.

Many years later, on the eve of the first Passover (and tenth plague), Moses himself returns to the Nile where he floated as a baby and gathers up Joseph’s bones from the river. Midrash teaches that he is able to find and raise those bones only after speaking with a legendary ancient woman, Serach bat Asher, the sole survivor of Joseph’s generation. She is a sage and storyteller whose wisdom enables Moses and the Israelites to honor their ancestors’ vow before setting out for the Promised Land.

Bones and stories bind the generations. Joseph’s coffin becomes Moses’s ark of salvation. Genesis and its tales of origins pave the way for both our enslavement and our subsequent emancipation. We carry our ancestors—and their stories—with us, wherever we go. In the words of William Faulkner: “The past is never dead. It isn’t even past.”

Faulkner’s words can be read fatalistically—but we Jews do not take them this way. Yes, our past constantly informs our present and our future, but it need not determine them. Our tradition emphasizes the transformative power of the past, with its bones and stories. A coffin can become a vessel of rescue and deliverance. A time of darkness can inspire us to be creators of light.

And so we move: from Genesis to Exodus, from origins to liberation.