After Sunday’s somber cemetery pilgrimage, Monday’s mission was in a much lighter vein—though not without its own sort of sacredness.

My son, Jonah, is a huge fan of the reality television show, Cake Boss.  When I told him that I would be traveling to New Jersey, he responded without missing a beat: “That’s awesome!  You’re so lucky!  You can go to Carlo’s Bakery!”  I had a 3:10 flight back to Boise, so Monday morning meant a trip to Hoboken to check out the now-famous bakery owned and operated by the star of Cake Boss, Chef Buddy.

This turned out to be a lot easier than the journey to Queens, a forty-minute jaunt down the highway.  As I neared Hoboken, I got some beautiful views of the Manhattan skyline, just across the river, including the new World Trade Center, which is rapidly rising and looks to be a striking tribute to the victims of 9/11. 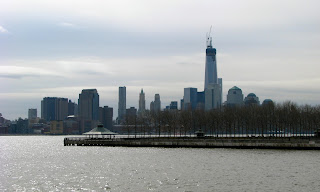 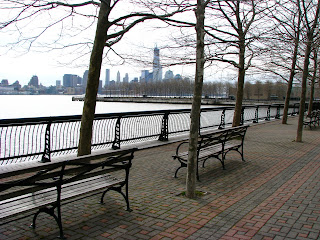 I parked in the city’s municipal lot and walked the three blocks to Washington Street, which is Hoboken’s gentrified thoroughfare, lined with organic markets, all sorts of hip specialty stores, ethnic restaurants, food carts, and, of course, coffee shops.  I stopped to take a picture of a psychic’s store front, featuring phrenology, tarot, and astrology readings.  A young woman passing by paused and addressed me with great urgency: “Do NOT go in there.  She is a BAD psychic.”  “OK,” I thought, as if there are a whole lot of good ones. . . .All the while, a strong and bitterly cold wind was blowing in from across the Hudson River, so I zipped my down coat tightly and kept my hands in my pockets for warmth.  Spring has come to Idaho, but it is still winter in the northeast, and I am no longer accustomed to the dampness of the chilly air. 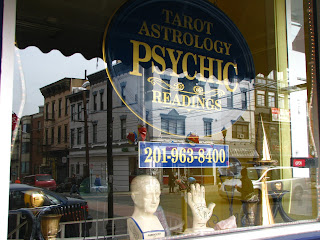 Carlo’s is at 95 Washington Street—but you couldn’t miss it if you tried.  It’s mobbed, humming with people coming and going, with all of the tourists (myself included) taking star-struck photographs out front, as if we were at the White House or the Grand Canyon.  If only Andy Warhol, who spoke of a world where everyone enjoys “fifteen minutes of fame” had lived to see the consequences of reality TV!

Just as I stepped back to snap my own picture, another couple came forward to do the same—and to my great surprise, the man was wearing a bright blue Boise State Broncos sweat shirt!  Of course, being an avid Broncos fan, I introduced myself and asked where they were from.  They told me that they had lived all of their lives in Maryland, but had adopted the Broncos as their favorite team because of their status as giant-killing underdogs.  They are huge fans and love our trademark blue turf.  It was especially nice to have this almost-miraculously unlikely encounter on this particular morning, as just last night, Boise State received a bid to the NCAA championship basketball tournament, aka “March Madness.”  So we got to kvell about this together.  Then I took their pictures, they took mine, we bid one another farewell, they headed for their car, and I stepped into Carlo’s and took a number. 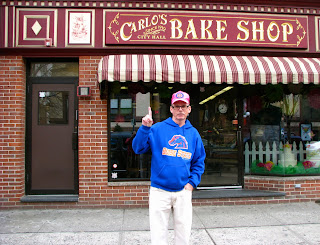 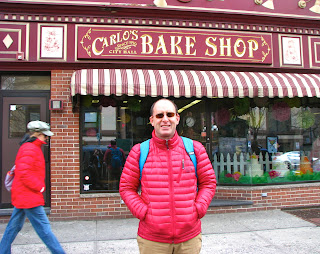 #72.  At the time, they were serving #51.  The rest of us, waiting, crowded into the small space, gawking at the gorgeous cakes and cookies all around us, and Buddy’s memorabilia on the walls, while episodes of Cake Boss ran repeatedly on a flat screen TV mounted in the back. 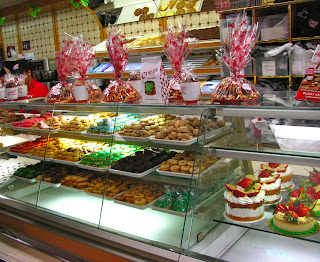 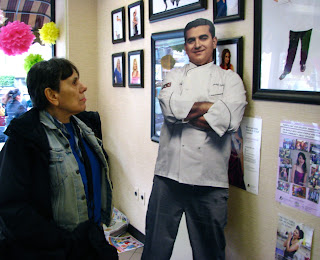 To the great credit of all the folks at Carlo’s, the line moved very briskly, and the despite the tight confines, the crowed was in high spirits.  The cashiers were models of both friendliness and efficiency.  When my turn came, I ordered two gorgeous small cakes (white chocolate mousse and red velvet), six cannoli, six chocolate almond biscotti, and a bunch of chocolate rugelach—along with two Carlo’s Bakery tee shirts for Rachel and Jonah.  Everything came neatly packaged in white bakery boxes with smart red trim.   As he rang up my order, the cashier asked where I was from.  When I replied, “Boise, Idaho,” he smiled and warmly said: “Welcome to New Jersey.  God bless.” 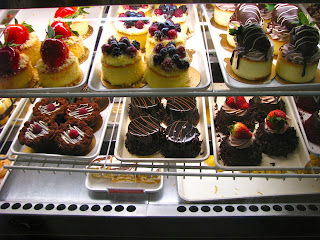 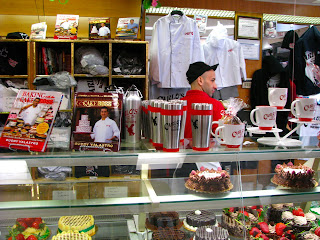 It was a great way to conclude my sojourn in the Garden State.   I got in my rental car, gassed up, and twenty minutes later, arrived at the Newark airport.  Rosa and I will enjoy a late dessert from Carlo’s upon my homecoming.

And then, quite literally, sweet dreams.  I can’t wait to bring Jonah his cakes!
Posted by dan at 11:32 PM

Love the weekend in NJ and the visit to Cake Boss. I too enjoy the show and hope to get there some day given I am not far from Philadelphia.