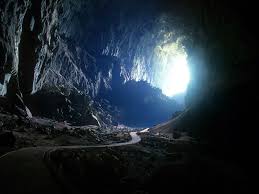 For three nights, the Professor, the Billionaire, the General, and the Actress journeyed together.  As the Beggar had instructed them, they walked by night and slept by day under groves of fragrant almond trees.  They shared their stories, as trekkers do, and although they would have been unlikely friends back home, they enjoyed the companionship that binds pilgrims along the road—except for the General and the Billionaire, who seemed to loathe one another.

At the end of the third night, the trail arrived at the mouth of a cave, with impassable cliffs rising up on either side.  The only way forward was through the cave. And so, despite their doubts and fears, they camped there and when the fourth night fell, they left the darkness of the surface for the immeasurably blacker womb-like darkness below.[i]

Just before entering the cave, they roped themselves together, lest they lose one another in the dark.  “I will go first,” announced the Professor.  “The Beggar told us that this leg of the journey is a test of wisdom.  I have spent my whole life preparing for that test.  In Plato’s cave, the prisoners glimpse only shadows but the Philosopher sees things as they truly are.[ii]  I am ready to lead the way.”

This annoyed the General, who was much better at giving orders than taking them.  But he reluctantly bowed to the Professor’s authority and experience on the task at hand and settled for being second in command as he roped himself to her.  The Billionaire immediately roped up behind the General, leaving the Actress to bring up the rear.

Bound together like this, they descended.  The darkness, so oppressively thick you could almost touch it, spawned a sense of dread.   They heard the hiss of water moving constantly behind the rocky walls and repeatedly tried to move toward it, but it never drew closer.[iii]  Otherwise, the sensory deprivation was soul- crushing.  Minutes became hours became days—in the absence of dawn and dusk, their instructions to travel by night became moot and they lost all sense of time.

Eventually, the General, the Billionaire and the Actress began to suspect they were getting nowhere.  They questioned the Professor, but she would not listen to a word they said.  “We are not lost,” she insisted.  “Wisdom demands patience.  I trust my life’s learning, and you must trust me.  This is a trial of wisdom; I will find the way.”

But she didn’t.  She talked about it incessantly, quoting philosophers from Aristotle to Zeno as she prodded the travelers onward.  Yet her accrued knowledge offered no illumination, no direction, no comfort.

Finally the General rebelled: “Enough of your empty words!  Your academic prattle is leading us nowhere.  You want wisdom?  Then heed the lessons I have learned in the real world, in the crucible of war: wisdom means taking strong, decisive action. Perhaps that is why the Beggar gave me a hammer.”  He pulled the tool out of his pack and started to pound away at the cold, confining stone walls.

The others panicked.  “What are you doing?” demanded the Billionaire.  “You are going to bury us alive!”

“That’s a real risk,” admitted the General, “but at least we stand a chance if we try to blast ourselves out of here.  Better to take that risk than to rot away in this infernal darkness while she blathers on.  Sometimes wisdom lies in choosing the lesser evil.[iv]

“Ah,” said the Professor, with resentful sarcasm, “It takes a wise man to philosophize with a hammer.”[v]

“Let him try,” said the Actress.

Everyone re-roped, putting the General in the lead, followed by the Professor, who stewed as he repeatedly leveled his blows.

More time passed—maybe hours, maybe days.  Thankfully, the General’s hammering did not collapse the cave—but neither did it open an escape route.   As he smashed away to no avail, the other travelers grew ever more desperate.  At last the Billionaire stepped forward to confront him:

“It’s true that wisdom demands decisive action.  But it also requires discrimination and timing.  That’s how I made my fortune: knowing when to buy and when to sell, when to tear down and when to build up.[vi]  It’s not just how to act, but also when and where.”

“You think I don’t know that?” barked the General.

“Give him a chance,” said the Actress.

“All right,” said the Billionaire.  “Hold off on the hammering.  We need to figure out the time and place to strike.  Maybe that’s the reason I was given the gold nugget.”

He took the nugget from his pack and began to tap it, though the darkness, against the cave walls.

“What’s the point of that?” asked the General.

“I’m sounding things out,” the Billionaire replied.  “Listen carefully to the tone of gold on stone.  When the nugget strikes a hollow place behind the rock, it will ring out, and we will have found our passage.”

So they roped up once more, this time placing the Billionaire in the lead.  He tapped away on the walls for what seemed like an eternity, but the plinking tone never varied and the travelers found nothing.  At last, even the Billionaire abandoned all hope.

“What do you know about wisdom?” lamented the General.

“Go on,” said the Billionaire.

“Sometimes,” the Actress continued, “I’m cast in a role that I have no idea how to play.  I just can’t inhabit the character, can’t find the right voice.  The harder I try to act my way into the part, the more frustrated I become. My ego gets in the way.   That’s when I have to just let go, admit I don’t know, and open myself to whatever comes.  Because only an empty vessel can be filled with something new.  And only a blank slate—or scroll—leaves room for a fresh story.

So far, we’ve been constantly doing—walking, pounding, tapping, talking.  Raging against the darkness.  And it has gotten us nowhere.  So let’s take a different tack and just sit here, quietly, together.  Instead of frantically pursuing wisdom, let’s give it a chance to find us.”

She sat down, unfurled her scroll in the blackness, and set it on her lap.

A deep silence settled over them.  They could not see one another, but they felt the stillness that bound them, now, more surely than their ropes.

They sat like this for a very long time.

Finally, the Professor broke the silence—but she did so gently, speaking in a humble, halting whisper, most unlike her earlier lecturing.

“I am remembering a story—a Sufi tale—that a student shared with me many years ago:

Nasrudin thought for a while, then responded, ‘The secret of wisdom is good judgment.’

‘Ah,’ said the disciple, ‘But how do we attain good judgment?’

‘Yes,’ said the disciple.  ‘But how do we attain experience?’

“I owe you all an apology,” said the Professor. “If wisdom demands that we learn from our mistakes, I have been the worst of fools, unable to admit when I’m wrong, unwilling to listen to anyone.  My former partner told me this when she left me, but I was so embittered I didn’t hear.”

“You are listening now,” said the Actress.

“I am trying,” said the Professor, “and only now, humbled by loss, mortality and fear, do I realize how much wisdom each of you has shared.  I have a proposal—but it isn’t mine.  Unwittingly, I have learned it from all of you.”

“What is it?” asked the Actress.

“The hammer, the gold nugget, and the empty scroll—as each of you suggested, these are our way out.  But none is sufficient on its own, we must use them all, together.

General—you have taught us the wisdom of decisive action.  Ready your hammer.”

As he did so, the Professor tenderly tugged the rope binding her to the Billionaire:
“You have taught us the wisdom of discrimination and timing.  Bring forth your nugget of gold.”

Then she reached through the darkness and took the Actress’s hand: “And you have taught us most of all, the wisdom of not-knowing, of waiting and listening and learning from others.  Hold out your scroll.  Perhaps it is not so empty as it appears.”

Following the Professor’s guidance, the General took his hammer and struck the gold nugget, which the Billionaire had set at his feet.  Upon impact, both hammer and nugget exploded into tiny pieces, releasing a shower of brilliant golden sparks.  Raining down onto the open scroll, these sparks transformed into fiery Hebrew letters, illuminating the entire cave.

Slowly, the stunned travelers’ eyes adjusted to the light.

“What is this?” exclaimed the Actress.

“The prophet Jeremiah’s vision,” whispered the Professor, “—and yours: words like fire. . . like a hammer shattering stone.”[viii]

Now the letters were moving again, pouring off the scroll, pooling on the cave floor, until they formed a miraculous river of light.  When that river’s flow splashed against the walls, they burst open and the stream of light gushed forth into the upper world.[ix]

Joyously, the travelers followed the river until it passed under a large stone archway, where it split off into four streams

The Beggar stepped out from behind the arch.

“Greetings, my friends.  You have proven yourselves wise.  Welcome to the second gate.”
[i] Many of the adventures of the Companions of the Zohar happen in caves.  As Nathan Wolski notes: Caves occupy an important place in zoharic narratives, their mysterious ambience providing a wondrous backdrop for the Companions’ expositions.  Their cavernous or womb-like quality also recalls Malkhut, the divine female, and in entering the cave, the Companions, as it were, enter Malkhut whom they now array and illuminate with their Torah innovations.
I have borrowed numerous details here from the zoharic narrative that Wolski calls “The Magical Book in the Cave of Souls”, Zohar 3:303a Tosafot, translated with commentary in Wolski, pages 69-88
[ii] Plato’s Republic
[iii] Cave-explorer Bill Stone offers a powerful description of life underground in the TED Radio Hour episode, “The Edge”.
[iv] Machiavelli, The Prince
[v] One of Friedrich Nietzsche’s final writings was Twilight of the Idols, or How One Philosophizes with a Hammer (1888)
[vi] Ecclesiastes 3: There is a time for everything, and a season for every activity under the heavens.
[vii] Story of Nasrudin as told by Joel Ben Izzy in The Beggar King and the Secret of Happiness
[viii] See Jeremiah 23:29 and Babylonian Talmud, Shabbat 88b and Sanhedrin 34a
[ix] See, again, the Zohar passage, “The Magical Book in the Cave of Souls” in Wolski, pages 84 and 85.  The river of fire—nahar dinur—is also the traditional Jewish name of the Milky Way.
Posted by dan at 7:55 AM