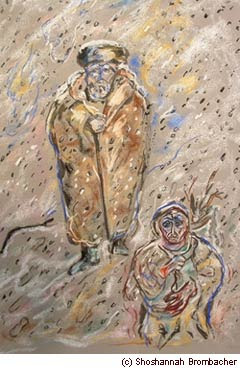 While this week’s Torah portion, Noach, describes its protagonist as a “righteous man,” most Jewish commentators, past and present, tend to disagree.  They note the qualifier that immediately follows this claim, b’dorotav, “in his generation” and argue that by implication, Noah was only relatively meritorious, compared to the very low standards set by his contemporaries. Unlike Abraham or Moses, Noah does not argue on behalf of his condemned fellow men and women. Anyone who is content to do nothing while all of creation is destroyed cannot be all that righteous.  Or, as Rabbi Abraham Joshua Heschel, drawing on the Hasidic tradition, puts it, Noah was a tzaddik im pelz, a holy man in a fur coat.  In a world gone cold, you have two choices.  You put on a coat and warm yourself, or you build a fire, which warms both yourself and others.  Noah, alas, prefers the first, more selfish option.

This distinction feels particularly timely during the current panic over Ebola.  Many political pundits and network talking heads are now playing on people’s very real fears, using them as fodder to stoke their calls for travel bans that would end our ability to deliver essential aid to the West African nations suffering deeply under the Ebola epidemic.  These fear mongers would, in short, have those of us in the developed world don our nice fur coats and avert our eyes while our fellow men, women, and children in Sierra Leone, Liberia, and Guinea die of this terrible disease.

Writing in this week’s New Yorker, Michael Specter adds that for at least a decade, we in the West could have pushed for the development of an Ebola vaccine but didn’t—because we weren’t the people getting sick.  At worst, this is blatant racism.  At best, it is just another example of “holy people in fur coats”, ignoring God’s unequivocal call, in last week’s portion, to be our brothers’ and sisters’ keepers.

Our tradition asks more of us.  It challenges us to see all of humankind as created in the Divine Image, and therefore worthy of our love, concern, and care.  Torah does not believe in borders sealed against aid workers—and hearts hardened by fear.  Neither should we.

For Randy Newman's prescient take on the matter, here's a video of his extraordinary song: "The Great Nations of Europe".  Listen, especially, for the last line.