We wake, well-rested, at 8:30, and enjoy a marvelous fresh breakfast:  chilled blueberries, yogurt, hard-boiled eggs, fabulous plates of cut vegetables and local cheeses, and our hostess' delicious homemade sour cherry jam on toasted whole wheat rolls. We're joined at this bountiful table by five other guests: a family of four Lithuanians (handsome young couple, their eleven-year old son, and his paternal grandfather) and an Irishman from County Cork. As it turns out, the Lithuanian couple lived in Dublin for six years, where they became close friends with the Irishman, who they named as their son's godfather.  They've moved back Lithuania; the Irishman is here for a visit and they're traveling the country together.  They've all come to Jurbarkas this weekend to see the grandfather, a retired engineer who directed the reconstruction of most of post-war Jurbarkas during the Soviet era.  As we eat and chat together, he passes around a collection of yellowing vintage photos of local people and places.  I want to ask if he remembers the Jews who lived here during his youth, but he speaks very little English, and it seems a bit too heavy a topic to broach in a foreign tongue as he sits with his family over a leisurely Saturday morning repast.   I realize that for some folks, asking about genocide victims is not entirely compatible with vacation brunch, so I bite my tongue and keep quiet.

The Irishman definitely does not.  He's funny, lively, personable--and he talks a blue streak of non-stop stories, jokes, and snarky commentary.  After breakfast ends, Rosa and I laugh at how much everyone at the meal seemed to live up to their national stereotype: the stoic, somber Lithuanians with their eyes turned downward while the glib Irishman regales the company.  I wonder what they thought of the crazy American-Jewish kayakers. 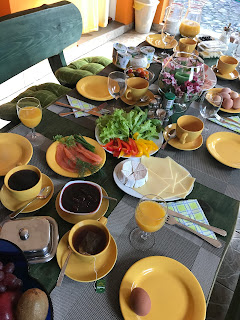 Jurbarkas--Yarburg in Yiddish--was a border town. Its proximity to Prussia and Germany influenced the Jewish community, which was more inclined toward Haskallah Enlightenment ideas and innovations than some of the more traditional Lithuanian shtetls.  In 1884, residents established a forward-thinking Talmud Torah that taught Hebrew, mathematics, grammar, and Russian in addition to the standard religious subjects.  One of the teachers there was Abraham Mapu, the Kovno Jew who would become known as the first Hebrew novelist and an important proto-Zionist figure.  Pinkas Kehillot Lita notes:

Yarburg was famous in Lithuania for its nationalistic atmosphere and Hebrew culture that dominated it.  One of the two public parks was almost officially called "Tel Aviv" and the Hebrew high school was called "Herzl". . . The Maccabi sports organization with about 100 members, an urban kibbutz of HeHalutz  named "Patish" (hammer) and branches of all Zionist parties were established.

Of course none of this remains in today's Jurbarkas.  From June-September of 1941, the Germans and their Lithuanian collaborators killed about 1900 Jews.  Only a tiny handful survived, hidden by righteous Lithuanian gentiles.

After breakfast, we walk all over town.  This is easy, as Jurbarkas is not very big.  Here, as in nearly every other village we've encountered along our journey, carved wood sculpture is scattered all over the landscape.  Lithuanians love wood.  This is a forest nation, the last country in Europe to be Christianized, and thus, even with its omnipresent churches, a place where vestiges of sylvan paganism remain strong.  Today, many of the carvings are explicitly Christian--saints, scholastics, and crusaders--but the pre-Christian roots show through in the images, aesthetics, and deep devotion to the medium. 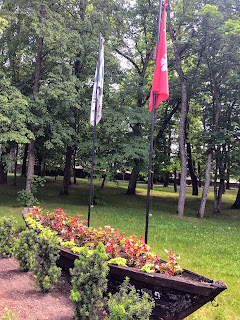 We eat lunch on the patio of a cheap yet excellent pizza place, in a rain that slowly turns from mist to drizzle to a downpour that sends us scurrying indoors for desert, followed by a Shabbat afternoon nap back at the bed and breakfast.  As a vegetarian, I find it challenging to get sufficient protein in this meat-loving country, so I'm often quite tired by mid-afternoon. The nap helps a great deal.  When I wake, we walk some more.  We don't come across any identifiably Jewish sites here, as we so frequently did in Kovno and Keidan.  But we pass numerous old wooden homes and storefronts, including one marked Vaistine, which is Lithuanian for "pharmacy."  I suspect that many of these places were once Jewish homes and workplaces--and even if these particular sites were not inhabited by Jews, they still give us a good feeling of what local Jewish spaces would have looked like seventy-five years ago. We stop and linger a little outside these buildings, trying to imagine how our landsmen lived. 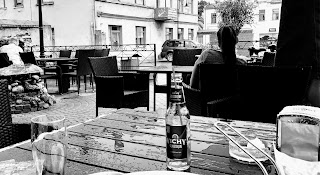 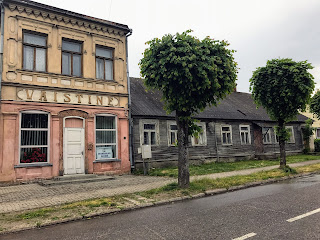 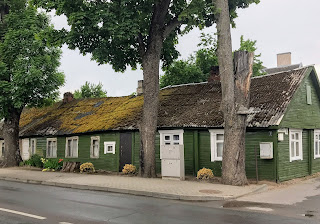 Tomorrow we  head out for our final week on the water, starting on the Minija River (from Gargzdai to the Nemunas delta) and then up the Curonian Lagoon to Klaipeda.   We've had some long paddling days, but for the most part, our time has gone quickly.  I am deeply grateful for these Shabbat rest days, which renew and rejuvenate us.