We plan to launch this afternoon in Gargzdai, on the Minija River.  In Yiddish, the town was known as Gorzd. Like Keidan, it was built on land belonging to the Radvilla family, a line of prominent Protestant nobles known for their tolerance and entrepreneurism.  Napoleon's army camped here on their fateful march toward Russia in 1812.

Gorzd's Jewish community was one of Lithuania's oldest, pre-dating the much larger city of Memel/Klaipeda, where we plan to finish our journey at week's end. Documents dating back to the fifteenth century cursorily mention Jews serving as tax collectors in Gorzd.  Memel's Jews buried their dead here up until the partition of Lithuania in 1795, when Memel became part of Prussia, while Gorzd ended up in the Russian Pale of Settlement.

Here, as in so many other river towns we've passed through over the last three weeks, a significant portion of the Jewish community earned a living in the lumber industry, cutting timber and floating it downstream to larger commercial centers.  Last year, while camping on the Oregon Coast, I read Ken Kesey's novel, Sometimes a Great Notion.  Set in a small Oregon estuary town, it tells the tale of a stubborn old logging family struggling against both natural obstacles, like water and weather, and human adversaries, especially the labor unions. The world depicted in the story is often brutal, defined by cruel injuries, petty personal slights, and at least one drowning.  It is an epic novel but also very goyishe--even though half-Jewish Paul Newman played the lead character, Hank Stamper in the Hollywood movie version.  Ken Kesey certainly didn't imagine Jews in this line of work.  Yet here in Lithuania, lumber was a  Jewish business.

Because of its proximity to Prussia, many Gorzd residents were drawn toward modernist, Enlightenment Jewish trends.  Pinkas Kehillot Lita notes that the Jews of Gorzd were open to the influence of German culture and most of them knew how to speak German.  In the interwar years of independent Lithuania, Gorzd prospered, as the community exported flax, animal hides, chickens, beans, and other merchandise to Germany.  By 1939, Gorzd had essentially become a commuter village, as 80% of the residents went off to work in Memel.

Then the Nazis annexed Memel and Gorzd suddenly became a border town again.  Too close to the Nazis for comfort, the Jewish residents with the means to leave usually did.  The lucky ones found refuge in the US and South Africa; most fatefully fled east, to other parts of Lithuania, where the Nazis caught up with them just two years later.  In September of 1941, those who remained in Gorzd were murdered in the forest, largely by Lithuanian nationalists.  As Pinkas Kehillot Lita recounts the tragedy:

Only one woman, Rachel Yomi, was able to save herself by pretending that she was dead, and she is the single witness to what happened.  A Lithuanian teacher named Gritzius. . . concealed her during all the years of the war.  After the war, Rachel married her rescuer.

Unbelievable.  To witness and survive the massacre of your entire family, all of your friends and neighbors.  To be left for dead,  hidden--and then to marry your non-Jewish rescuer.  Can we imagine what bonds sustained--and strained--such a marriage?  Today--June 11--is my own anniversary. What would it be like, I wonder, to live in partnership with one to whom you literally owe everything? How could Rachel Yomi endure life in this place after the war ended, given all she'd seen and lost?  Oh how I wish I could hear her tale! Alas, there is no record.

So in lieu of her words, a poem by Abraham Sutzkever, originally in Yiddish and translated by Cynthia Ozick.  It is dedicated to Yanova Bartoszewicz, the Polish woman who hid Sutzkever in her cellar and brought food to his family in the Vilna Ghetto during a period of mass liquidation in late October of 1941.  Sutzkever later planted a tree in her honor at the Yad Vashem Holocaust memorial in Jerusalem:

And when I go up as a pilgrim in winter, to recover
the place I was born, and the twin to self I am in my mind,
then I'll go in black snow as a pilgrim to find
the grave of my savior, Yanova.

She'll hear what I whisper, under my breath:
Thank you.  You saved my tears from the flame.
Thank you.  Children and grandchildren you rescued from death.
I planted a sapling (it doesn't suffice) in your name.

Time in its gyre spins back down the flue
faster than nightmares of nooses can ride,
quicker than nails.  And you, my savior, in your cellar you'll hide
me, ascending in dreams as a pilgrim to you.

You'll come from the yard in your slippers, crunching the snow
so I'll know.  Again I'm there in the cellar, degraded and low,
you're bringing me milk and bread sliced thick at the edge.
You're making the sign of the cross.  I'm making my pencil its
pledge.

Early in the afternoon, Justas picks us up at the B&B in Jurbarkas.  He and the owner warmly exchange greetings; as it turns out, Justas stayed here on vacation just a couple years ago.  She is an impeccable hostess-- kind, industrious, and very welcoming.  Just what we needed this weekend.

We drive about three hours to the put-in, making a few wrong turns along the way.  No matter.  Justas is, as usual, in high spirits.  He mentions that he's working to line up some media interviews for Rosa and me at trip's end.  This would be good publicity for him and his business--and he deserves it. We're happy to support this, as Justas has been invaluable--and a real mentsch.  He drove hours to reach us today, resupplied us with a fresh canister of fuel, and, between business calls, eagerly shares his ample knowledge of Lithuanian history along the road.  He's a spirited entrepreneur,  constantly juggling an eclectic array of enterprises and interests.  He expresses great pride and intellectual curiosity in our journey across his country, and his role in it.  This brings me joy; it feels like a small yet significant act of tikkun, of healing, in the long history of Jews and Lithuanians that is in deep need of such measures.

We're at the river around 4:00 pm, our last and latest launch of the journey.  Justas drops us off at a gently-graded put-in beside a shady bridge over the Minija in the heart of Gargzdai.  We're heavy-laden, with a fresh supply of food, and, for the first time, over fifteen liters of fresh water stashed in the hull.  We'll need it on the Curonian Lagoon, a bay of the Baltic Sea, where we're expecting brackish water that doesn't serve for either drinking or cooking.  We bid Justas farewell for another week, until our expedition's end, and push off into the stream. 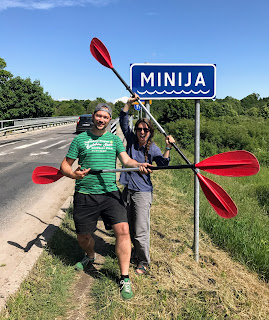 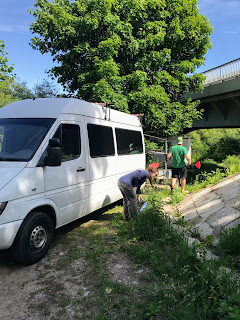 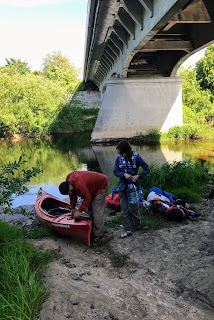 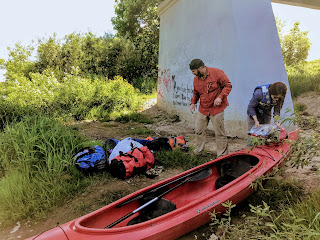 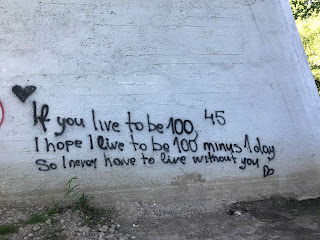 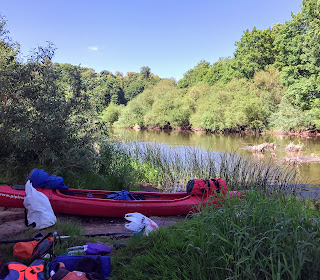 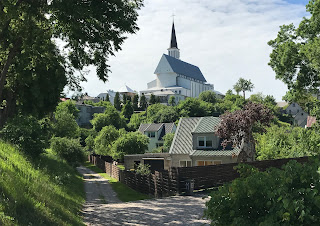 A few minutes later, we hit our first dam on the Minija.  Uztvanka.  Ugh.  We've certainly learned and come to loathe this Lithuanian word.  Thankfully, it's not too difficult to line the boat through this one.  We're learning the drill.  Below the dam,  Rosa and I switch things up a bit.  For the first time in three weeks, we change positions in the kayak: she takes the stern and I move up front to the bow. But after just an hour or so, we swap back, both of us preferring our usual set up, where I steer and Rosa navigates and provides the power.  Over the course of the journey, we've developed a strong working partnership with a good rhythm, and we're sticking with it.

As evening falls, we glide down what may be our favorite stretch of river so far.  The water is extraordinarily clear, with a steady current (most unlike the Nevezis) and just enough riffles, rocks, and overhanging branches to keep things interesting.  After almost a week on the Nemunas, it's a pleasure to be back on a smaller, more intimate stream. Although there is no real wilderness left in a place as small and long-settled as Lithuania, this section of the Minija, with its steep and densely forested banks feels wild and free-flowing.  Rosa puts it beautifully: The forest is hugging us.  At times, we might imagine ourselves in Canada or northern Idaho as the river dances through boreal woodlands, with frogs and songbirds playing the tune.

We pitch our tent around 7:45, boil pasta, and savor the lingering honeyed evening from our campsite under the pines.  It's a peaceful, meditative time.  Now to bed. Tomorrow, hopefully, a rigorous paddle to land's end at the Nemunas Delta.