Whose Owns the Rambam? 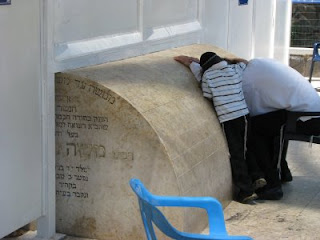 Almost three months ago, I was in Cordoba, Spain, with Rosa. While we were there, we visited the birthplace of Rabbi Moses ben Maimon, aka Maimonides, aka Rambam (see my post of March 28) He was the greatest Jewish philosopher of the Middle Ages and, perhaps, the most brilliant Jewish thinker of all time. Of him it is said, "From Moses to Moses, there was none like Moses."
So it was fitting then, to come full circle and visit his tomb in Tiberius. OK, many scholars do not think this is really his tomb (a common phenomenon--King David has at least three tombs here), but for many centuries it has been venerated as such, and it is clearly now associated with him, as a memorial.
When Maimonides was a young boy, his family fled Spain, after a group of Islamic fanatics displaced the more moderate and tolerant Islamic rulers who presided over the Golden Age on the Iberian Penninsula. They eventually settled in Egypt, where Maimonides lived and died and may have actually been buried. He spent most of his life in Fostat, where he was physician to the Sultan as well as leader of the Jewish community.
Maimonides wrote tomes of scholarly works, but is best known for two: the Guide for the Perplexed and the Mishnah Torah. The latter was the first code of Jewish law. In it, Maimonides condensed and systematized all of the rulings of the Talmud. His stated purpose was to allow educated Jews more time to study secular matters such as astronomy, metaphysics, and other sciences of the day.
In his philosophical masterpiece, the Guide for the Perplexed, Maimonides begins with a letter to one of his students, which explains the aim of the book. The student's problem is this: he had a good traditional Jewish education, then began secular studies--which put him into a quandry, since the secular science seemed to contradict the teachings of the Torah. This left the student with three choices. He could either assert the truth of Torah and reject secular learning, accept the science and abandon the Torah, or compartmentalize his learning.
But none of these is acceptable to Maimonides, for whom there is only one Truth. He offers a fourth way, which is to constantly re-interpret Torah in light of the changing wisdom of the day. In his case, this meant reconciling Torah with the neo-Aristotelian philosophy of the Middle Ages, as passed down by his Islamic theologian peers. That philosophy is now terribly outdated, but the Maimonidean premise--that Torah must be re-interpreted to jibe with the advancing secular wisdom and science of the day--remains a bedrock principle of a liberal approach to Judaism.
And after my day in Tzefat, I was really, really happy to be making a pilgrimage to a place honoring the Rambam. I am much more of a rationalist than I am a mystic; Maimonidean philosophy is much more my cup of tea than kabbalah. I am descended from Litvaks, who carried on the rationalist approach, opposing the hasidim and their ectastic mysticism, and though I am not a purist in my rationalism, I am clearly more inclined towards this avenue of Jewish practice.
But I was very disturbed by what has been done to the tomb of the Rambam. It has, in short-- like almost every Jewishly significant place in this country--been completely taken over by the ultra-Orthodox. As a result, there is now a mechitzah, separating men and women, running literally over the center of Maimonides' tomb. This is the height of fanatical absurdity, errecting mechitzahs over gravestones! And Maimonides, who was a radical iconoclast (the traditionalists burned his books at the time they came out) would have been appalled to see his memorial controlled by those whose practice is antithetical to everything he stood for.
Well, moving on, I paid my respects and then we drove back to Jerusalem--on highway 90, which runs right through the center of the West Bank. What a different place this is from Israel proper. It is dry, desolate, and direly poor. We could see large Arab villages, and also Jewish settlements on mountaintops. These settlements are doomed; Israel will undoubtedly surrender this territory, as it is already outside of their security fence which will, for better or worse, largely define the borders of an eventual peace agreement.
And I am with those who would return this land to the Arabs, though not because I think they deserve it. They have repeatedly rejected proposals that would give them a just and fair peace. As one Israeli sage put it, "The Palestinian leaders never miss an opportunity to miss an opportunity."
So why withdraw from the West Bank? Yesterday, I saw a bumper sticker that captures my feelings exactly. It said, "Out of the Territories--L'ma-an Yisrael--For the Sake of Israel." NOT for the sake of the Arabs, who have done nothing to merit getting this land. But for our own sake, because being an occupying power eats at the core of Israel's Jewish conscience. We cannot rule over hundreds of thousands of Palestinians and remain a democratic Jewish state. Either we would cease to be democratic or, giving them full rights (and given their high birthrate), would cease to be Jewish. Neither is acceptable.
So I hope we will continue to pursue peace, for our sake, even though we do not have very good partners in the process.
And now it is good to be back in Jerusalem, which is settling into the peace that covers it once a week on Shabbat. Shabbat shalom to all.
Posted by dan at 11:10 AM