The Rabbi's Tale--Response by Gayle Speizer 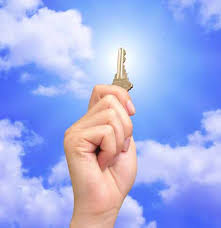 While all the congregation held hands, (including holding the rabbi's left hand), in apprehensive, but excited expectation, the rabbi took each of the keys and opened all of the locks with her right hand.
The huge door swung open and the group was instantly engulfed among hundreds, if not thousands, of ancient Israelites in the midst of the Red Sea, scurrying along a dry path between the walls of WATER to the other side. While they were being swept along by the throng, they did not notice that their clothing had changed from modern-day apparel to the clothing of the ancient Israelites who were fleeing from Pharoah's army.
By the time those who had entered the door by way of the copper, silver and gold keys, had arrived on the opposite shore of the Red Sea, their memories had also been erased. Their hearts filled with joy as Miriam sang praises to Jehovah for bringing the multitude safely across.
As darkness fell, they were led by a pillar of FIRE through the WILDERNESS, where eventually they would encounter the Ten Commandments and all the rest of the Torah.
Posted by dan at 4:28 PM