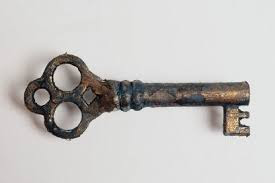 She looked at the expectant faces before her. The Rabbi found herself uncertain what to do next. As she stood there, frozen, her congregation became worried, “Rabbi?” they asked. “Rabbi? Are you okay?”, “Rabbi, what do you have?” Rabbi? “Why are we here?” “Rabbi?” “Rabbi?” RabbiRabbiRabbiRabbi.. the word echoed in her ears, becoming all she could hear...
A tug on her sleeve broke her reverie “Rabbi, What does it mean?” asked a small girl.
Then she knew exactly what she needed to do. She was a Rabbi. Rabbi. Teacher. Rabbi’s Teach. So she would teach. As Eijah taught her, so she would teach them.
She told them of her dreams, of the door and of it’s locks. She told them about the keys and the paths she walked to acquire each one. As she spoke the people didn’t just hear her words they shared her experiences. They too marched and sang and demanded in shrill and insistent voices the progress and transformation achieved by the Firebrands of their past. Standing beside them as they celebrated their triumphs and wept for their failures. Then they visited all the sacred places of their tradition starting with the tents of Abraham & Sarah and on through Rashi’s vineyard and into the new world seeing the continuous thread woven through history binding and recreating the Jewish people over and over again, with a different face, but always the same heart. Finally, they found themselves wandering the Sinai, the woods of medieval Poland, the streets of modern Jerusalem. At times they were alone. Other times they were surrounded by people they did not know. Often with empty hands but occasionally with a map in a language they could not read. Always feeling a little lost and a little found.
As she taught them each key in turn began to crumble in her hand. Slowly the copper key turned to ash, the water key to rust, and the gold key just faded away until each one was gone completely and her hands were empty.
When she finished she invited the congregation to come forward and open the doors together. They were confused, “With what? You had the keys and now they are gone. How can we open the door now?”
“The keys are not gone.” the Rabbi replied, “You have them now.” Surprised, each person searched their pockets and found they did, indeed, have all three keys.
“But what about you, Rabbi?” asked a concerned young man, “How will you open the locks?”
The Rabbi smiled a confident smile, “I will rely on you to take me with you into whatever future we find behind that door.” With that she gestured them forward.
As they approached the door with their keys the locks slid open in unison. As the great door swung open before them they were blinded by a great glare. It made them stumble back even tho they were at once eager and afraid of what might await them.
In a short time their vision adjusted and they saw the great light was nothing more than the sun, set high in the sky, on a bright spring day. Spread out before them was not the promised land, but their own town, their own country, their own world as they had left it. Full of the beauty and blight, kindness and chaos, hope and despair that define every day life.
Crestfallen, they turned to the Rabbi for an answer. “You said the beyond the door we would find Torah. But we only see before us the world, as it is today.”
“Yes.” explained the Rabbi. “Torah is not for a perfect place full of perfect people. Torah is for this world and for us as we are today. Now, go into the world with Torah and find your way.”
With no other option, the slightly disgruntled congregation went back to their lives. Lives which turned out to be not quite the same as when they left. Or rather, the world was exactly the same, but the people themselves were different. For they found as they went through their day to day lives occasionally they could feel the weight of those keys again. That reassuring tug reminding them they and their people carried the Torah with them where ever they went.
Posted by dan at 9:12 AM