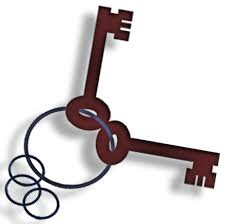 But this time, the rabbi was not alone. For on that eve of Rosh Hashanah, the sacred day when the world labored to be born anew, she found her entire congregation waiting there for her—young and old, long-time friends and newcomers, women and children and men. She laughed and cried and smiled as they embraced her and she embraced them back. Then, she pointed at the door, held up the glittering keys, and. . .

saw a crowd of congregants, the usual ones—Harry Cohen, Rose Cohen, Irving Miller, Stanley Tedesco, Christine (Tina) Williams—you know them, too. The rabbi gave a key to the first three people and told them to bring them back when they completed their investigation. They returned shortly with nothing except puzzled looks on their faces. Many more people claimed a key; and although most came back empty-handed, a few found something. One person, who emerged from the copper room had a hammer and thumbtacks and a sheaf of pamphlets. A second person emerged from the room of water with a load of law books, and a third came out of the “wilderness” room with a dusty, crumbling map.

The rabbi also saw at the edge of the crowd someone who looked like Elijah, and he had an agitated look on his face as if he were arguing with someone—probably God, with whom he had many contentious moments until the usually benign seer quit being a prophet.

After awhile, with so many people going in and out of the three rooms, the doors were left ajar, and no keys were needed. In and out, room to room. Finally, as the rabbi was observing all these comings out and goings in, she realized that the last person to enter the room of fire was taking a long time. The man was of undistinguishable age and looked steadfast. With the door now mostly open, she could see that the room was almost empty, except for a fireplace with raging flames. There was also a bookshelf with two books, one small and the other larger. Suddenly possessed with acute vision, she saw the man take the first book off the shelf and open it. Inside was only one short message: You don’t know how much time you have left, so get to work. The other larger book had burnt edges and smelled of smoke. In it was an old photograph of a very handsome man, probably in his early thirties, and underneath was a handwritten caption in Russian and English: Dadja Loveh, Uncle Louie, taken in 1899. On the next page was a little story:

Uncle Louie was a revolutionary and used to get arrested from time to time. When he went to jail he used to take his little printing press with him. He made his pamphlets and dropped them out of the back window to his young nephew, who used to (with his mother) wheel a baby carriage from telegraph pole to telegraph pole and have someone nail up a sheet of paper, which always ended with--comes the Revolution.”

After reading the two books, the man gathered them up and left the fire room with a look of resolve.

The rabbi moved closer to the door of the water room as another congregant entered. He, too, was surprised to find an almost bare room with a small book shelf and two books. He opened the first book and found a short, somewhat enigmatic statement: chose life without the threat of death if you don’t. The second book had a picture of a wiry man with a khaki long sleeved shirt and khaki pants holding up a string of about sixty trout. The caption read: Nephew of Uncle Louie, Sam the Wise. On the facing page was the following parable:

According to Maimonides, one of the highest forms of Tzdakah, charity, is the anonymous gift. Sam took his youngest son Lazar to a father-son dinner, once. After the meal and some boring entertainment, the master of ceremonies (another Sam), got up.

"I'll make no bones," he began, "we want to raise money to buy bats and gloves for boys not as fortunate as our wonderful sons." He threw out a figure. Someone called out, "I'll give you five." Another person said, "ten." "Sounds like an auction," Sam said as he got up to "go to the bathroom."

When he came back after about ten minutes, the master of ceremonies stopped his patter. "Ladies and gentleman...actually there are no ladies at a father-son affair, and not all of you are gentlemen, either." A few people laughed. "But there is one gentleman here who just doubled the amount we've raised so far. There'll be plenty of baseball played this summer."

"So who is it?" somebody yelled.

The seeker in the water room chuckled a little, but he also noticed a sheaf of envelopes tucked into the back of the book. Each contained a solicitation letter from organizations like cancer hospitals or the natural resource council. When he left, he had a look of determination. Actually, he looked a little like Mr. A. Nony Moose.

The rabbi was pleased, but she also noticed a teenager shrinking behind the dwindling crowd. This young person finally gathered the courage to enter the “gold” room. This room had the usual shelf with two books, but the walls were papered with maps. The teenager opened the first small book and saw no picture, only a brief inscription: You are here; where are you going? On the next page was a small map with an X and the repeated statement: You are here, followed by some dotted lines and an arrow that was pointed upwards toward Sinai. The precocious teenager rushed from the “gold” room, the room of exile, to begin the journey from here to there.

By now, no one was left, or so the rabbi thought. But from the back materialized a man whom everyone called Uncle Lazar. He approached the rabbi, gave her a kiss on the cheek (as happens with female rabbis) and then a letter. “Kain Y’Hi Ratzon,” he said and left.

This time the rabbi was truly alone. She opened the letter and found a sheet that said simply:

Dealing with Crises or Life in General

1. Achieve a sense of awe everyday. Look for a baby’s smile or a double rainbow or turning leaves on a mountain. Listen to Dylan or Beethoven or even the sound of silence.

4. Create at least one parable a day. A parable is the mirror of our life.

The rabbi folded the letter and also put the three keys into it. I have become the keeper of the keys, she thought--the keys to the sovereignty of learning, faith and deeds of loving kindness.