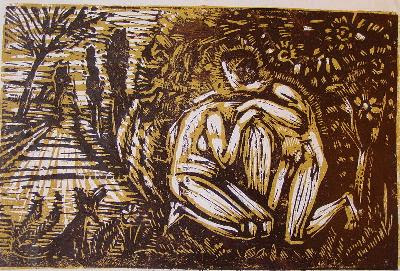 After tasting the fruit, we felt strong and proud.  As Chava told you last night, we did not eat until we’d carefully considered the consequences, to the best of our knowledge and ability.  Although we disobeyed, we believed—and still believe—we did what Yah desired of us.

But as it turns out, no matter how well you weigh a decision beforehand, you cannot grasp its full import until after the fact.  As the momentary exhilaration of eating the forbidden fruit wore off, fear and despair seeped in.  With opened eyes, we became aware of things we’d never discerned before: lowering light, lengthening shadows, burnt orange leaves falling from the heretofore verdant trees. We noticed the mushrooms on the forest floor, feeding on decay.  We watched the earthworms transform dead waste into new soil.  And we knew in our hearts and felt in our bones, that one day, we, too, would be food for worms and fungi.  We would return to the clay from whence we came.   Death became palpable, and the pang of leaving the only home we’d ever known grew almost unbearable.  We’d consciously opted for adulthood, but having grown up overnight, with a single bite from the Tree of Knowledge, we found ourselves in way over our heads.
That’s when we realized that we were naked.  As we watched the creatures swarming around us, we saw they all possessed protective layers to guard against the mortal world: shells and scales, fur and feathers, insects’ exoskeletons and amphibians’ slime.  Whereas we, with our paltry hair and thin skin, stood utterly exposed.  After we tasted from the Tree, our vulnerability overwhelmed us; the least we could do was cover ourselves.  So we girded our loins with fig leaves, then hid beneath the heavy brush lining the riverbanks.

All the while we recognized we were making a very big mistake.  Of course it was foolish to pretend we could hide from Yah, or even wish to do so.  We knew better than to flee from our Creator. But our faith faltered.  Our courage waned.  We lost our nerve. Then, as now, our failures came not from lack of knowledge but from fear, confusion, and want of will.

Our sin was not the eating but the hiding afterwards.  As in countless cases since, the problem was not so much the original act as the ensuing cover-up—not taking responsibility for our misdeeds.  We failed when we hid.  And then, even more damningly, we failed again when Yah offered us one more chance.  Ayekka, Yah cried out to us—“Where are you?”

Chava and I both heard that call.  Fully aware that Yah knew exactly where we were, we longed to rise to the occasion, to follow our better angels, to be open and honest with Yah.  We yearned to step out from the shadows, and proclaim:

“Hinnenu—Here we are, Yah.  We ate from the Tree.  We acknowledge our choices and stand here, now, accountable for them.  We are sorry for our deception.  Now, Yah, what do you ask of us?  Where do we begin to make amends?  How can we use our new-found knowledge to help you continue creating this world?   How do we heal our brokenness?”

But the words didn’t come.  Chava and I held our breath, in uneasy silence.  Worst of all, when a deeply disheartened Yah finally called us out and confronted us, we dumped our accumulated fear and self-loathing onto one another.  I blamed Chava.  She blamed the snake.  And then we blamed each other.  Because we failed to own up to our deeds, our brave act of eating degraded into something shameful.

We were despondent.  The weight of disappointing Yah and one another—and the isolation it imposed—was the worst punishment imaginable.  Separately, Chava and I lamented how we’d diminished ourselves, in Yah’s eyes and our own.  We grew irritated and impatient with one another.  In the long, awkward, alienated stillness that ensued, we struggled to endure the burden of our failure.  Finally, haltingly, I turned to her and offered an apology:

“It wasn’t your fault.  I’m sorry.  I don’t regret taking the fruit.  I’m glad you gave it to me.  But I deeply regret my cowardice, hiding and then blaming you.”

“Well,” Chava replied, “I blamed, too.  Adam, we have a long, hard road ahead of us.  We’d better figure out how to support one another and learn from our mistakes.”

**********
My children, we did, indeed, have a long, hard road ahead of us—as you do, today.  In the ages that followed, we faltered and failed again and again—as partners and parents and people.  Time after time we sinned against each other, against Yah, against our families and ourselves.  And sometimes after sinning, we still hid, even though we knew better.  But in the end, despite and because of all that failure, we managed to make a good life together.  More often than not, we learned to acknowledge our shortcomings.  Thankfully, Yah never gave up on us—never stopped asking that very first question: Ayekka—Where are you?  And with experience Chava and I both gained the courage to mostly respond, “Hineni—Here I am.”

My children, Yah still asks that question of each and every one of you:  Ayekka?  Where are you?  On this sacred day, I implore you: Be present to that voice.  Listen for the questions.  Live in them.  Make your misdeeds the measure of your growth.
And do not believe the fear-mongers who preach of thorns and thistles and childbirth’s pain as divine retribution.  Those challenges, like our exile from Eden, are a painful but necessary part of the plan.  Yah didn’t really rebuke the serpent either; why would Yah chastise him for doing Yah’s own bidding?  Consider the way that snakes still move with such extraordinary grace—winding over the earth we love—and you will know that serpent did not lament losing his legs.  Everything that unfolded in Eden was about consequences rather than punishment.  Its moral is the price we willingly pay to live as adults.  For as I’ve aged, I have learned that Yah’s will is sustained by order and chaos alike.  And mature knowledge is, by definition, born of both, the fruit of experience and travail.

My children, as I speak to you now, the vivid late morning light still shines bright upon us.  But by the time the sun sank low that first Yom Kippur evening, I assure you, Yah had fully forgiven us.  Our exodus from Eden was an act of grace, without a trace of anger.  We departed with Yah’s blessing at ne’ilah, the Hour of the Closing of the Gates.

At that same hour later tonight, we will take our leave of you for this sacred season.  Our tale will be set aside, as all stories must be—and your work will begin in earnest.  Meanwhile, Chava and I both wish you all a strong and reflective fast that leads you deeper into the adulthood you desire.

G’mar chatimah tovah—may you be sealed for blessing in Yah’s Book of Life.