The best journeys do not unfold too easily.  Obstacles help transform a mundane trip into a pilgrimage.  So I don't begrudge Old Montefiore Cemetery its relatively inconvenient location for the car-less traveler coming from Brooklyn.

I took the L train to the J train, which I rode for a sweltering hour until the end of the line at Jamaica Center.  After twenty minutes there, I caught a bus, which dropped me at a stop where I waited for another bus, which finally let me off about a quarter mile walk from the cemetery.

I suspect that when Rabbi Shimon Finkelstein buried his beloved aged father here, this working class Queens neighborhood was home to many Jews, much like the Brownsville section of Brooklyn where Rabbi Shimon lived with his family.  `Today the neighborhood is multicultural and eclectic--predominantly African-American, with sizable Hispanic, Filipino and East African communities.   After the white flight of the late 20th century, there are not many Jews living here.

But there are myriads of dead ones--over 150,000 Jews buried in Montefiore cemetery.  It's a virtual city of the dead, with street signs enumerating the lanes that crisscross this vast expanse of headstones: 1st through 10th streets, and Abraham, Benjamin, Carmel, Montefiore, Ezra, David, Gideon, and Herzl Avenues.  I stopped by the office, built into the monumental entranceway, where the receptionist handed me a map with directions to Judel Finkelstein's grave: block 88, row 20R, grave 20, section 2, near the intersection of 6th Street and Benjamin Avenue.

Alas, this location looks much distinctive on the map than it is in reality, on the ground.  I walked through the designated gate, 148N, into the United Hebrew Community section--and found hundreds of graves, with no clue to my great great grandfather's whereabouts.  So I started to walk, row by row, over and around the stones, searching through the sea of Hebrew and Yiddish inscriptions.  It was like seeking a needle in a haystack. 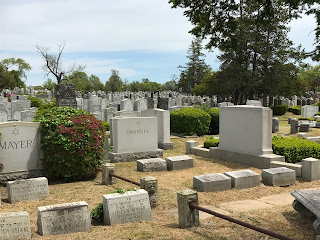 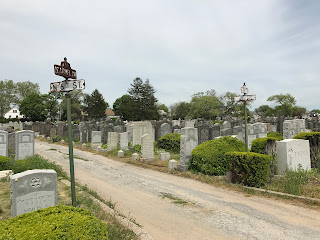 Then three of the groundskeepers, in neon green shirts, approached me and asked, in broken English, what was I looking for?  I told them: "Judel Finkelstein" and handed them the map.  They began to speak amongst themselves in their native Spanish, then started counting off rows and paces.  In short order, they led me right to the granite headstone marking my great great grandfather's gravesite.  I don't think I would have found it without their assistance. So I thanked them profusely, in my very poor Spanish, then shook their hands, and took their picture by the marker. 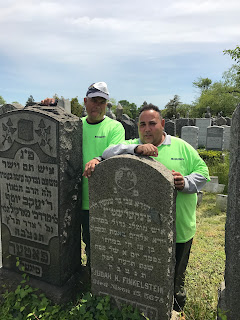 Then I spent some time alone.  Back in Boise, I'd packed a bag of pebbles that I collected along the banks of the Boise River, just opposite the Idaho Anne Frank Human Rights Memorial.  I set one atop the headstone, now over a century old.  Yehuda Tzvi (Judel) Finkelstein died on the first day of Pesach, 15 Nisan, 5678/1916.  I pondered the events of the intervening century, some joyous and others inconceivably tragic: the utter destruction of his homeland and culture, the birth of the state of Israel (which he, as an observant Orthodox Jewish man, prayed for three times every day), the flowering and challenges of the American Jewish community that he joined in the final decade of his long life.  I chanted El Malei Rachamim, the traditional mourners' prayer asking the Holy One  to mercifully grant perfect rest to his soul.  And I read the Hebrew words engraved on the marker: "Here lies Rabbi Yehuda Tzvi, son of Rabbi Shimon HaLevi Finkelstein.  Great in Torah, God-fearing in truth and righteousness."  I wondered--and still wonder--what this pious Old World rabbi would have made of his great great grandson, a Reform rabbi in Boise, Idaho.  I want to believe that despite the years and differences that divide us, he would have offered me his blessing. 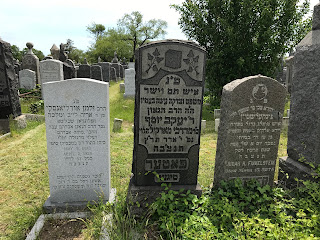 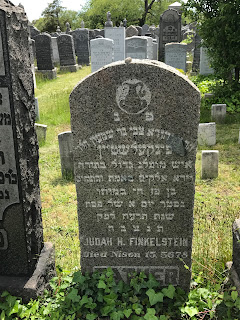 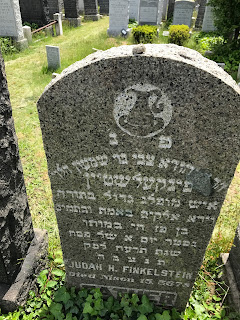 On my way out, I wandered through the cemetery, passing the final resting places of so many Jews, mostly ordinary men and women, and also a few famous--and infamous--ones.  Among those buried here: actor Fyvush Finkel, songwriter Shalom Secunda, anthropologist Oscar Lewis, and the great modernist painter Barnett Newman, whose headstone, fittingly, resembles one of his monumental color squares. 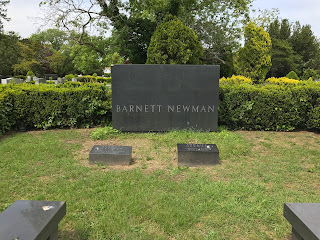 Montefiore is the burial place of Solomon Blumgarten, better known by his pen name, Yehoash.  He was a Yiddish literary giant, renowned as a poet, raconteur, short story writer, and translator (into Yiddish) of both the Hebrew Bible and Longfellow's Hiawatha.  Like my great great grandfather, he was born in Lithuania.

They share this sacred earth with the boxer Al "Bummy" Davis, New York State assemblymen Sidney Fine, Philip Kleinfeld and Irwin Steingart--and Prohibition-era mobsters Jacob Shapiro and the Amberg brothers, Hyman, Joseph and Louis.  Perhaps most notably, for many, there is also the grave of the seventh--and last--Lubavitcher rebbe, Menachem Mendel Schneerson, who many Chabadniks still believe to have been the Messiah.  His stone, and that of his wife, Mushke, sit on the outskirts of the cemetery in a large, tent-like structure known as the "Ohel".  It is a pilgrimage site for Lubavitchers and quite a few others, too; Jared Kushner and Ivanka Trump came here shortly before Election Day to offer a prayer for Donald. 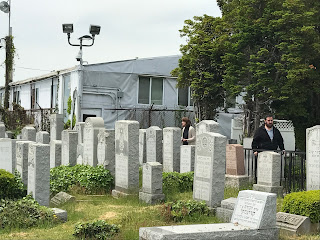 I didn't go into the Ohel.  My Litvak ancestors, including Yehuda Tzvi Finkelstein, were proud misnagdim, strict rationalists and ardent opponents of Hasidism, which spread like wildfire through the Ukraine and Poland but never took much root in Lithuanian Jewish culture.  Their blood runs strong in me.  I walked past, respectfully, then went out the exit and caught the bus back to the second bus to the two long subway rides back to Brooklyn.

On the return trip, with plenty of time to reflect, I found myself thinking about the diversity of 21st century America.  My Old World ancestors lived in rural shtetls and impoverished, entirely Jewish pockets of cities, dwelling, markedly, amongst their own people.  They interacted relatively rarely--and not always by choice--with the wider, non-Jewish world.  I, by contrast, ride the bus and the subway in New York City with people from every corner of the earth--and find the gravesite of my great great grandfather by the grace of the Hispanic groundskeepers who lovingly tend to it. Who knows what kind of worlds--Jewish and beyond--my descendants will inherit.  I hope and pray for the best of both, in which they might live proud, knowledgeable and committed Jewish lives while deeply engaged with their neighbors, of all nations, creeds, and colors.

Later that evening, Rosa and I went uptown, to Broadway, where we watched Paula Vogel's extraordinary new play, "Indecent."  It's a masterpiece, and it fits perfectly with the journey that I'm now embarked upon.  It is a play within a play, telling the story of Sholem Asch's revolutionary drama Gott fun Nekoma, "God of Vengeance."  The narrative is both old and new, a tale of history and memory, tradition and radicalism, art and responsibility, Old World literature and the first lesbian love scene to play on Broadway, back in 1923--which resulted in the entire cast being put on trial for obscenity.

It is tragic and hopeful, raising more questions than answers.  And it's incredibly timely.  As the curtain fell, the entire audience applauded--and wept. 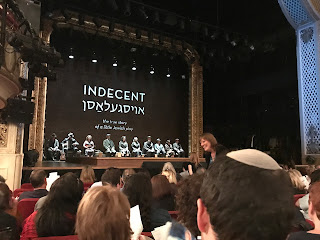 It was a day of weeping, for loss and discovery and love and beauty, endings and beginnings.