To follow a river upstream is to go back in time.  Rivers flatten and age as they approach their inevitable rendezvous with the sea.  To return to the headwaters, then, is to turn back the clock, to embark upon a journey into history, in search of origins.

This is the nature of the pilgrimage I'm commencing this week with my daughter, Rosa.  We will soon be kayaking through my ancestral homeland of Lithuania, paddling along the Neris/Vilija, Levuo, Nevezis, Nemunas, and Minija rivers from Vilna to the Baltic Sea.  Along the way, we will pass by cities, towns and shtetls populated for centuries by a proud and ancient Jewish community.  We'll experience the beautiful streams and dense forests where Litvaks worked, prayed and played--and where, starting in the summer of 1941, over 90% were brutally murdered and buried in mass graves by some of their own longtime neighbors working in concert with the Nazi occupiers.

My hope is to follow the river back, as much as possible, to the past, to recall the horrors of the Shoah but also to reclaim and better understand the achievements that preceded it. I want to celebrate the phenomenal culture of Jewish learning and living that my Litvak ancestors and their peers established and maintained.  The challenge is to fully acknowledge the tragic ending without allowing it to consume all that came before.  I want to go back to the headwaters, to revel in the extraordinary creativity of Jewish Lithuania, which gave us rigorous yeshivot and secular Yiddish art and literature, Zionism and socialism and communism, tradition and Enlightenment.  I want to listen to the rivers, which witnessed it all.

But I am getting ahead of--or maybe behind--myself.  Let me begin midstream, in Syracuse, NewYork. I have come to town for Rosa's graduation from the SUNY School of Environmental Science and Forestry, class of 2017.  Over a century ago, Rabbi Shimon Yitzchak Finkelstein arrived here in the city's heyday to take a position as the rabbi of Syracuse's growing Orthodox community, which he would serve from 1896-1902.

Finkelstein was born in Slabodka, the densely-settled and direly poor Jewish neighborhood on the outskirts of Kovno, Lithuania.  As he later wrote in a short memoir, "When a citizen of Slabodka became rich, he moved to Kovno; when a citizen of Kovno was impoverished, he moved to Slabodka."  Young Shimon grew up in a one-room hut with an earthen floor, together with his parents, paternal grandmother, three sisters, and one younger brother.  Food was sometimes scarce, but learning was abundant.  Shimon's father, Rabbi Yehuda Tzvi Finkelstein (or, in Yiddish, Judel Girsch) was a teacher of Torah and Talmud, descended from a long line of rabbinic sages from the nearby city of Keidan.  Shimon followed in his footsteps, studying with some of the most renowned sages of the time: Kovno's chief rabbi, Isaac Elchanan Spector, who confirmed his ordination, and Rabbis Yitzhak Blazer and Yosef Yozel Horowitz, the two primary disciples of Rabbi Yisrael Lipkin Salanter, who founded of the Mussar movement.  [More on all of this in the days and weeks to come] 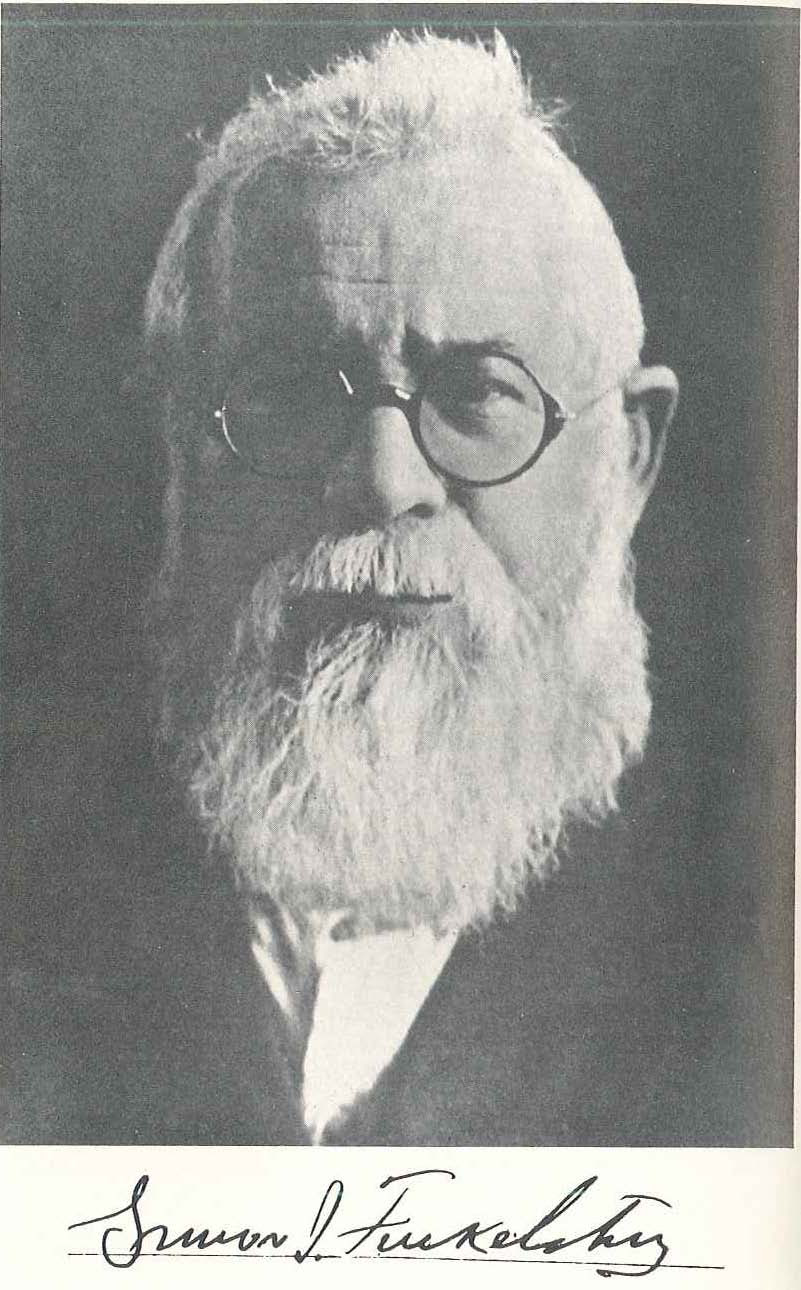 Upon completing his yeshiva study, Rabbi Shimon Finkelstein married Hannah Brager and proposed a move to Germany, where he might continue his studies at a secular university.  The new rebbetzin had other plans.  As Finkelstein tells the story:

"It cannot be," my wife said.  "You will emerge from the university a German, while I will remain a Lithuanian Jewess.  We will cease to be a pair.  If you feel life here too restricted, let us go to America."

So. . . the young couple arrived in the United States in 1886.  Rabbi Finkelstein served a congregation in Baltimore until 1890, then moved to Cincinnati, Ohio, where he befriended Isaac Mayer Wise, the father of American Reform Judaism and founder of my alma mater, the Reform rabbinical seminary Hebrew Union College.  Rabbi Wise offered his younger Orthodox colleague a teaching position on the HUC faculty.  Rabbi Finkelstein later recalled:

I could not reconcile my religious views with those taught at the Hebrew Union College and while I would have liked to be a student and a teacher, I was compelled to decline the invitation.  Despite our differences, Dr. Wise and I remained fast friends during the years of my stay in Cincinnati. . . I recognized, even at the time, his remarkable generosity and greatness of spirit, particularly the assistance he gave to visiting [Orthodox] scholars from abroad, despite his awareness of their basic antagonism to his teachings and his activities.

A few years later, Rabbi Finkelstein accepted a call to Syracuse, which he described rather surprisingly as "that beautiful city, whose climate is so much superior to that of either of the cities in which I had been located before."  (Given that snowy Syracuse is, in fact, the least sunny city in America, I suppose the grey, wintry weather must have reminded Finkelstein of his boyhood home in Lithuania). At any rate, during his time in Syracuse, he became dear friends with the city's most prominent Jewish resident, Louis Marshall, at the time a promising young lawyer--and Reform Jew.  Marshall would later become the preeminent Jewish lay leader and philanthropist in early twentieth century America.  He worked closely with Louis Brandeis to mediate labor disputes in the garment industry, organized the American Jewish Committee, and gave generously to countless Jewish organizations, helping to establish and fund both Hebrew Union College and the Conservative Jewish Theological Seminary.  Marshall was also an ardent conservationist.  His sons, Bob and George Marshall would establish the Wilderness Society and Louis, himself, was the primary creator and first board president of the New York State College of Forestry--the academic institution that would become the SUNY College of Environmental Science and Forestry, where my daughter, Rosa, graduated this weekend.

In 1902, Rabbi Finkelstein left Syracuse for Brownsville, New York, a heavily Jewish section of Brooklyn.  He remained there, as rabbi of Congregation Ohev Shalom, until his death in 1947.  But his time with Louis Marshall in Syracuse, coupled with his friendship with Rabbi Isaac Mayer Wise in Cincinnati, left a lasting mark--different from, yet scarcely less significant than, the influence of his teachers back in Slabodka.  In his elderly years, Rabbi Finkelstein pondered the future of American Judaism and noted:

My acquaintance with Wise and Marshall, the one destined to be the leading Reform rabbi, the other the leading Reform layman of American Jewry, convinced me of the sincerity and devotion of these men who so fundamentally disagreed with me.  I could not accept their views even in a slight measure.  I developed a high respect for them as persons, however, and respected that while their therapy for the ailments of American Jewry was futile, they might be partially right in their criticism of some of our ways as orthodox rabbis.  The conviction grew in me that neither they nor we were able to establish any effective Jewish community in America, in which the spiritual power of ancient Slabodka would be combined with the broad understanding characteristic of America.  Despite their good intentions, the Reform Jews were too little aware of the remarkable joy and beauty of traditional Judaism; while some of us failed to appreciate sufficiently the extent to which America was a fulfillment of our moral teaching.  I wished that I could have consulted Rabbi Israel Salanter regarding this dilemma, feeling that he, with his remarkable spiritual insight and love of man, would have found some means for retaining these great men to traditional Judaism, and yet retain their outlooks, which could be so useful to our faith.

I believe the core challenge endures.  Seventy-five years after Rabbi Shimon Finkelstein wrote these words, Jewish leaders--myself included--still struggle to combine Old World piety and New World freedom.  How do we bring the Litvak experience, so rich in tradition and learning, to our American communities?  Perhaps here, too, the rivers might have something to teach me.

Oh, and one more detail. . . A few years after Rabbi Shimon Finkelstein arrived in America, his younger brother, Rabbi Mendel Finkelstein, followed him.  Like Shimon, Mendel was educated in the renowned yeshivot of Lithuania.  He, too, got married as a young man, to Toba Nakka Kagen, from the shtetl of Srednik on the banks of the Nemunas River. Undoubtedly influenced and inspired by his older sibling, Rabbi Mendel and Toba Nakka Finkelstein emigrated to America.  They settled in Dayton, Ohio, where he served as the rabbi of the Orthodox synagogue, Beth Jacob, until he, like his brother, died in 1947.  Rabbi Mendel and Toba Nakka (later known as Tillie) had six daughters: Fannie, Leah, Helen, Sarah, Clara, and Rosella.  Their only son, Joseph, left home immediately after his Bar Mitzvah.  He headed south, to Cincinnati, where he enrolled in the same school where his uncle had declined Rabbi Wise's proffered appointment, the Reform rabbinical seminary, Hebrew Union College.  During his time there, at a professor's recommendation, he changed his name from Finkelstein to Fink.  He went on to an illustrious career as a Reform rabbi, mostly in Buffalo, New York.

His son--my father, Rabbi Arnold Fink--never met his grandfather, Mendel.  Perhaps for this reason, Dad developed a lifelong interest in genealogy.  He spent countless hours researching the family history, especially the years in Lithuania.  But he never went there.

I'm going for him.