Upstream 6: Secret Destinations (Monday, May 22, near Grigiskes, on the Neris River)

All journeys have secret destinations of which the traveler is unaware.

We launch our river journey with a push off from the shore of the Neris River east of Vilnius.   We're Kaunas-bound.

Or maybe our expedition really began last night, around midnight, when, against my expectations, the airline called to report that my lost bag containing much of our camping gear had arrived in Vilnius. Either way, this morning Rosa and I packed up, then left our hostel with Justas Pipiras, the extraordinary Lithuanian kayaker who has so generously agreed to lead our support team  for this journey.  He picks us up around noon in his workhorse white van  and drives us to a regional park on the right bank of the Neris around 10 km to the east,  upstream of Vilnius.  He is providing our kayak and equipment, shuttling us, and taking care of so many logistics.  And he's really excited about our trip.  It seems that while Lithuania is full of kayakers, it's pretty unusual to spend a month on the rivers here, camping and covering the length of the country.  We'll be checking in with him regularly and he's planning to follow and post our progress on his Facebook page--I encourage readers to look him up and "like" his page.  He is our expedition's "angel"--we could not do it without him. 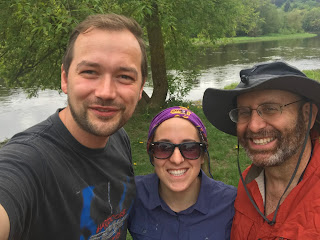 We paddle an hour through verdant countryside, slowly getting a feel for the boat and one another's paddling strokes,  then arrive back in Vilnius.  After three days in town, it's familiar, but good to see by river.  To the city's great credit, they've set up some special art for paddlers to enjoy, hanging three large contemporary metal sculptures from the bridges that we pass under.  It's terrific to see it displayed on the river! 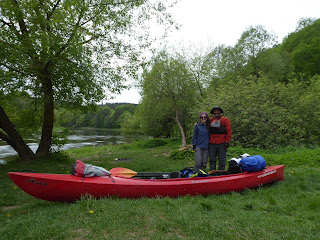 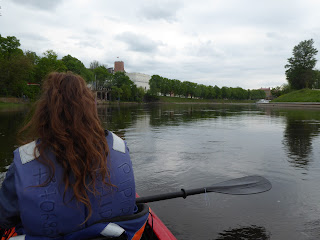 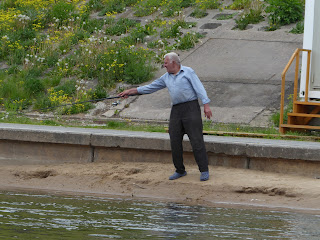 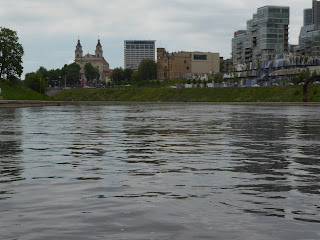 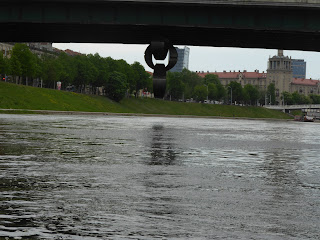 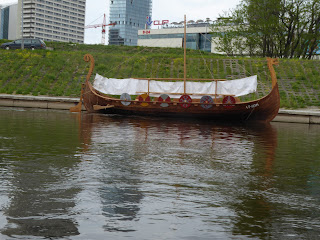 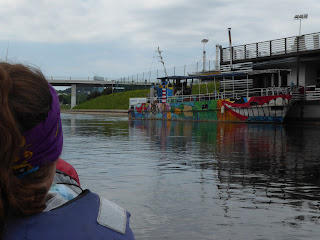 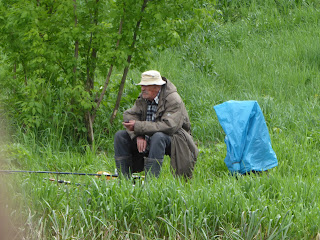 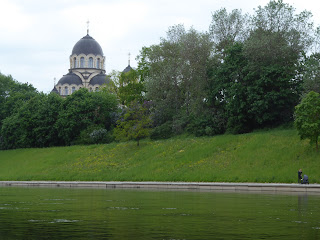 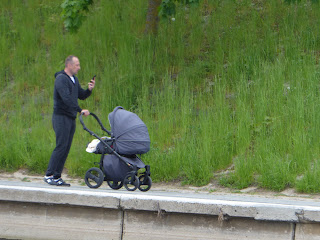 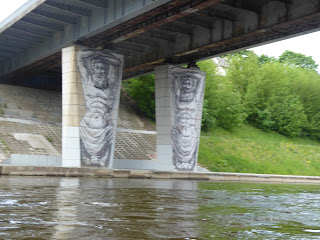 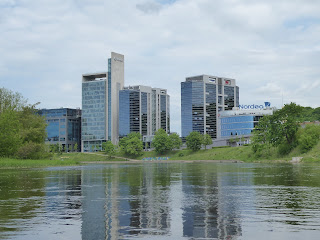 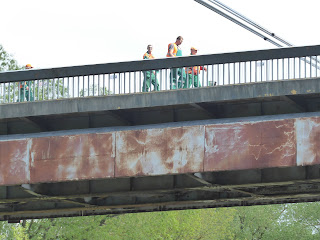 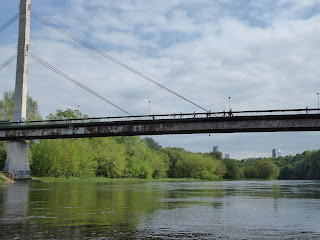 After another hour, we reach the end of town, which is marked by a large television tower.  It's the tallest structure in Lithuania, and an important historic site; it played a major role in the end of the Cold War on January 13, 1991, when 14 unarmed Lithuanian civilians died, with hundreds more injured, while resisting Soviet troops who seized the tower and temporarily took control of the airwaves.  It remains a powerful local symbol of freedom.

From there, we pass through a lush, leafy park, then a bleak industrial zone.  Lithuania is decidedly not flat.  There are no real mountains, but the banks are marked by rolling hills, much like the American Midwest, and there are so many shades of green.  It's verdant country, with birdsong omnipresent.  We see flocks of mallards, mergansers, and gulls on the river, and the forest is full of songbirds that we do not see but very definitely hear.  Their music is lovely.

We also float past an assortment of people, mostly older and silent, a few shouting their hellos (Labas in Lithuanian).   Boats line the riverbank, too--narrow tapered and  painted flat black--essentially hollowed out logs.  They look quite traditional, a type of craft that folks have probably been paddling for hundreds of years.  Very different from our bright red hardshell plastic Perception tandem kayak!

Around  7:15 pm we make camp.  In this late Baltic spring, it stays light until nearly 11:00 pm, so there is plenty of time to paddle!  We set up our kitchen on a mudflat by the river, with the tent perched further up the bank, tucked into a small forest clearing.  After rehydrating some Pad Thai for dinner, I ponder an excerpt that I've read from Ellen Cassady's  deeply moving story of her Lithuanian sojourn, We Are Here.   It's gleaned from the memoir of a Lithuanian survivor of the Shoah, Levi Shalat, who wrote it in July of 1944, upon the liquidation of the Shavli ghetto:

Through the half-open doors of the cattle cars, we could see the lush Lithuanian countryside, the golden-yellow sheaves of rye standing in the fields.  The aromas of field and forest were intoxicating...

The train sped through the stations, past the very towns where we had been born and raised.  With wistful eyes we looked out into the Lithuanian provinces where we had friends and family, places that had long since become Judenrein,  cleared of all Jews.  The train sped through Lita, as if offering a final farewell tour--one last look at all the years we had dwelled in this country before hurling us into purgatory.

In that moment of passage, full of beauty and terror, Levi Shalat's words point to a question that still haunts me, all these years later.  How does one reconcile the beauty of the landscape, of the natural world, with the human horror that happened here?  Rosa and I are camping in the same forests, by the same rivers, that flowed with the blood of our people.  And yet the birds sing, blissfully unaware, as they likely sang then, too.  I think we humans want to anthropomorphize nature, to have it share our experiences.  We want landscape and weather to echo us, to respond to us, to care about us.  But they don't.  For better and for worse, they don't give a damn.  And yet that, too, is part of nature's attraction, at least for me.  It is bigger than us, not immoral but, yes, amoral.

The Rabbis recognized this long ago.  In Talmud, they ask why stolen seeds will germinate and grow for the one who stole them--and why a raped woman may get pregnant.  Their answer: "Olam noheg k'minhago--the world pursues its natural course."   So it is.  God offers Job essentially the same message.  The world is not designed to fit our needs and echo our ethical concerns.

Should the birds stop singing because so many suffered and died here? I can't understand this crazy world, natural and human.  It boggles my mind to contemplate.  But I am glad they sing.  I am grateful for their songs, and for the river's, even--or maybe, especially--here.

The work of tikkun, of consciously repairing the world, is not theirs.  It's ours.  I hope that I am worthy of my tiny portion of that task. 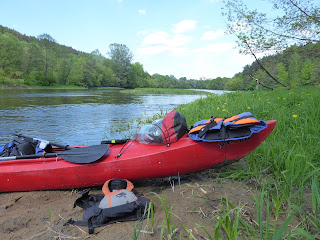 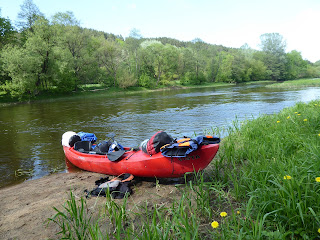