After my first weekend in Lithuania, in Vilnius (known in the Jewish world as Vilna), my head is spinning.  What have I learned?  Mostly, that humanity is vastly complicated--joyous and tragic, compassionate and cruel, strikingly brilliant and utterly foolish, heroic and evil.  This is not new to me, really, nor is it likely new to any of you reading this.  Yet one feels all these contradictions so powerfully here in the city that was known as "Jerusalem of the North." Before World War II, Vilna was a major intellectual center of Jewish life.  After the Nazis invaded in June of 1941, it became a place of death and devastation as the community was decimated during the Shoah.  Before landing in Vilna, I'd experienced this city through black and white photos and newsreels and the proud but austere columns of the Talmud pages famously published here, so I was quite taken aback by the city's vibrant, colorful beauty.  I'd expected a Soviet-looking, grey and somber place, but Vilnius is far from that image.  It's a charming, hip, Baroque and very European place--much more like Prague and Budapest than the ugly Soviet kitsch that I'd envisioned since my Cold War boyhood.  It's also more than a bit disarming to find such charm in a place that was once a third Jewish, and where the ghosts of the Jewish past lurk around nearly every lovely corner.  How could human beings enjoy the elegant parks and concert halls and cafes and culture of such a city and then participate actively in slaughtering their Jewish neighbors, or stand idly by during the genocide?  This is inconceivable to me.  I do not blame the current generation of Lithuanians; they are not responsible for the sins of their parents and grandparents.  Nor do I, as an American, pass judgment.  After all, I live on land that once belonged to tribes the Shoshone-Bannock, and enjoy the fruits of a system that was, for a century, built on the backs of African-American slaves.  In the United States, we have our own genocide and mostly, I think the Europeans have been more honest in facing up to their history than we have.

Still, I don't understand.  We walk down these graceful streets, witnessing culture and kindness and beauty and it is just so hard to reconcile with the brutality of seventy-five years ago.  I want to remember the past and also to enjoy the present, to honor the martyrs and also celebrate the joys of spring and music and art with those who live here and share it with me.

Enough generalities and philosophizing.  What have we done and seen?

We arrived on a perfect spring festival weekend, dedicated to street music and dance.  Kids and teens were busking at every corner, and the entire city seemed to be dancing!  The weather was glorious, and the sight of hot air balloons flying over the Old Town was stunning.  There was even beach volleyball!  Who knew? 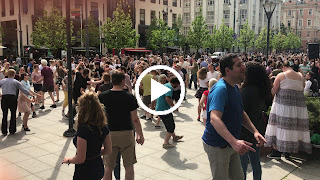 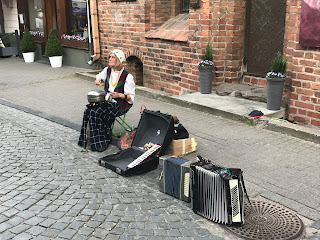 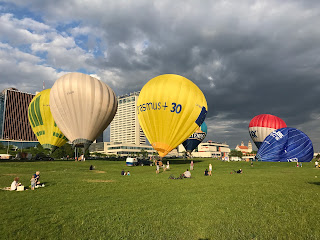 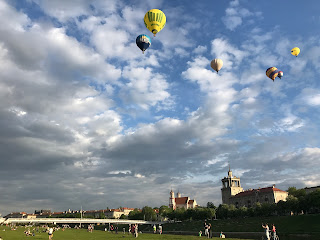 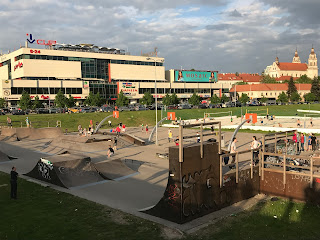 On Sunday afternoon, I took a walking tour with a great group called Vilnius By Locals.  The guide, Milda, was young, enthusiastic and very knowledgeable.   We spent much of the tour in a section of Old Town known as Uzupis--or, by the residents' own reckoning, "the independent Republic of Uzipis."  In 1997, local bohemians declared their independence, elected their own president, and wrote up their own constitution.  Every year since, they celebrate their Independence Day-- on April Fool's Day--by issuing visas and drinking beer.  This is the Lithuanian version of the "Conch Republic" in Key West or the People's Republic of Berkeley.  Uzipis is the artists' district, hip and progressive and beautifully quirky. 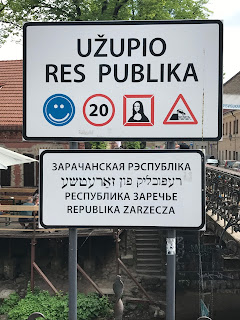 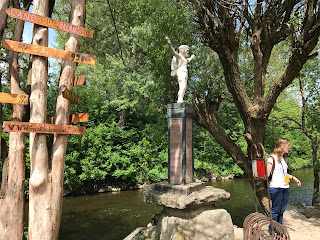 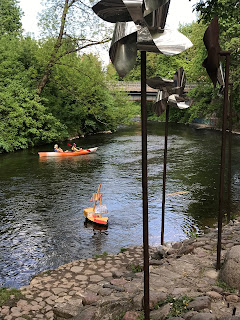 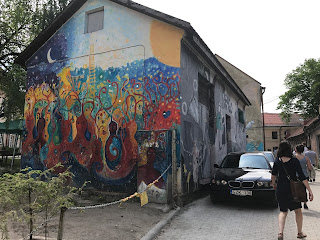 They have posted their constitution in numerous languages, including Yiddish!  It begins: "Everyone has the right to live by the river and the river has the right to flow by everyone."  Perfect for Rosa and me, as we prepare to spend a month on Lithuania's rivers. 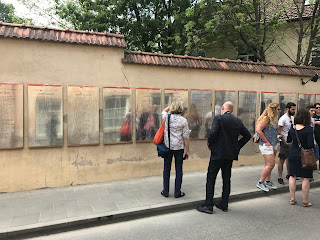 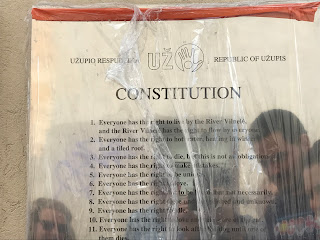 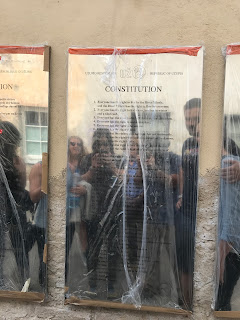 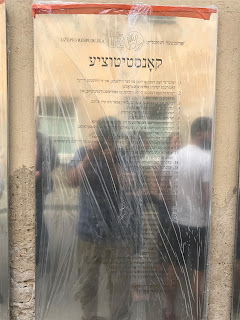 The symbol of Uzupis is this angel, who rises from the central town square and watches over the citizens. 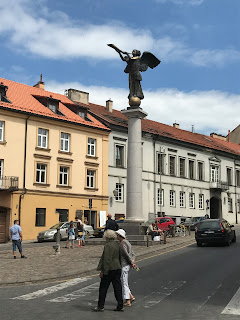 And, per "people's republic" and the whole hippy thing, there's even a miniature "Tibet Square" which the Dalai Lama visited a few years back! 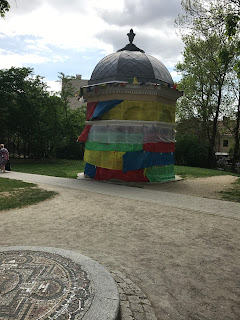 Milda also walked us through the Jewish Quarter.  There are streets like Gaona Gatve (Gaon Street, named for the Vilna Gaon--more below) and Zydu Gatve (Street of the Jews).  Very little remains, of course.  Before WWII, the city was 1/3 Jewish--around 80,000 people.  The history of Jews in Vilna is incredibly rich--I'll write much more on this when I return to Vilnius at the end of our paddling and we take a tour specially devoted to Jewish sites.  For now, I'll just note that we saw the site where the Great Synagogue stood (before the war, Vilna was home to nearly one hundred smaller shuls where most people davened) and the memorial to the father of Lithuanian Jewish Talmud and Torah scholarship, the  Vilna Gaon. 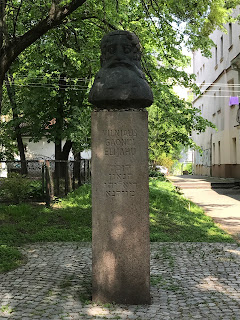 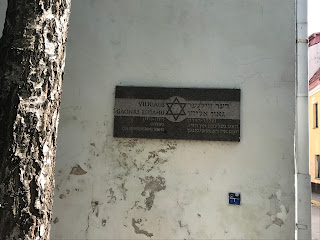 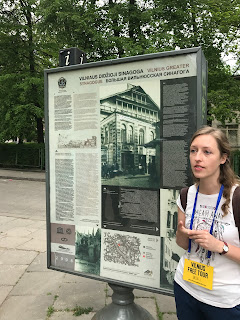 The Gaon--Rav Eliyahu of Vilna--lived in the early 18th century and introduced a method of Talmud study that became the foundation of the great Lithuanian yeshivot established by his students.  He believed in using reason and contemporary knowledge as tools to get at the plain meaning of the sacred text.  He was a strict rationalist; Litvaks--the Jews of Lithuania--followed his path and took great pride in his astounding knowledge.  The street named after him has a marker noting where the Vilna Ghettos (large and small) were located during the Shoah.  I suppose that for most contemporary Lithuanians, living on Gaon and Zhydu streets is not so different from the way we in America live in all sorts of places named after the Native Americans that we exterminated.  It is a strange feeling to walk here, to see the beauty and know the tragic history, too.

Walking through Old Town, we came to Vilnius' great Cathedral, bell tower, and square, at the city center. Just above it is a castle, built by Grand Duke Gediminas, who established Vilnius in the 14th century. The view from there is spectacular. 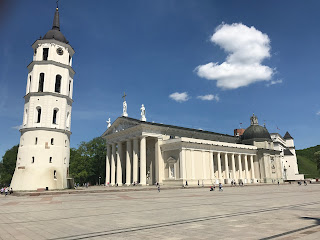 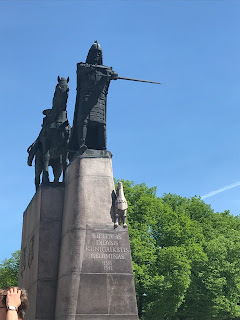 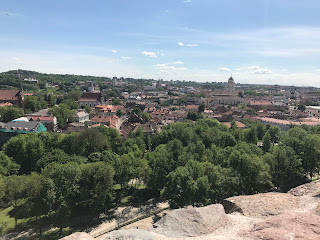 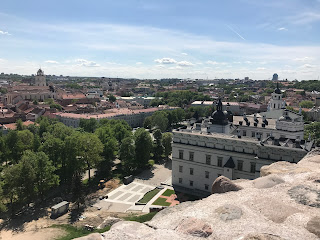 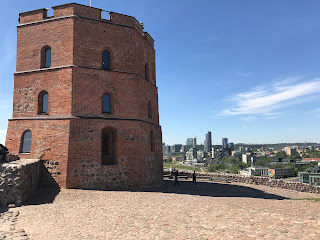 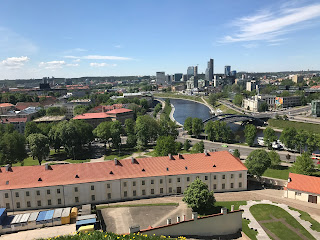 In Cathedral Squre, there is a special tile.  It was the starting point of a human chain of 2 million people who linked arms from Vilnius all the way to Tallinn, Estonia in 1989 as a remarkable peaceful protest against Soviet occupation.  Today, people go to this square and turn in a full circle, 360 degrees, while making a wish.  The notion is that if the dream of independence could come true, as it did, then this place has the power to make wishes come true for others. . . 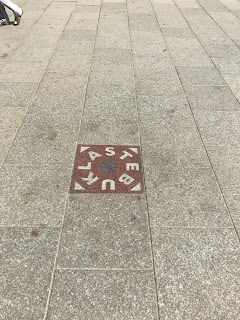 We walked through Literatu Gatve--a street honoring literary figures with a connection to Vilnius and Lithuania.  It's a marvelous place.  I was drawn to the square honoring Moishe Kulbak, whose Yiddish poem "Vilna" is a classic.  Here's the ending:

You are a dark amulet set in Lithuania.
Figures smolder faintly in the restless stone.
Lucid white sages of a distant radiance,
Small, hard bones that were polished by toil.
The red tunic of the steely Bundist.
The blue student who listens to gray Bergelson--
Yiddish is the homely crown of the oak leaf
Over the gates, sacred and profane, into the city.
Gray Yiddish is the light that twinkles in the window.
Like a wayfarer who breaks his journey beside an old well,
I sit and listen to the rough voice of Yiddish.
Is that the reason why my blood is so turbulent?
I am the city: the thousand narrow doors into the universe,
Roof over roof, to the muddy-cold blue.
I am the black flame, hungry, licking at these walls--
That glows in the eyes of the Litvak in an alien land.
I am the grayness!  I am the black flame!  I am the city!

And, on the old synagogue, a frozen water carrier,
Small beard tilted, stands counting the stars. 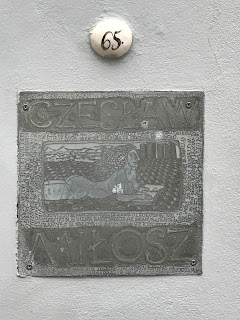 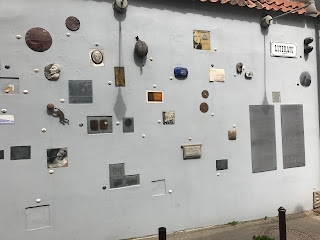 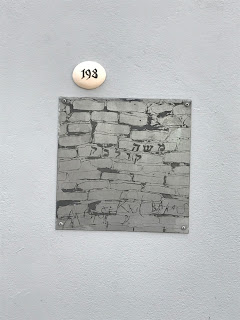 We ended the afternoon walking through the entrancing Bernardinu Gardens and then having a bagel at Vilnius' only Jewish bagel shop, with a stop by a statue of American rocker Frank Zappa, whose iconoclastic non-conformity made him a hero to the Lithuanian independence movement.  It was a wonderful, puzzling, beautiful and paradoxical day that I will long contemplate. 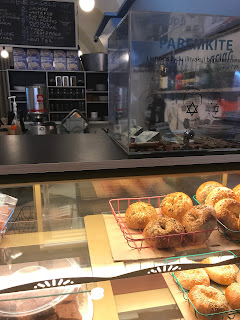 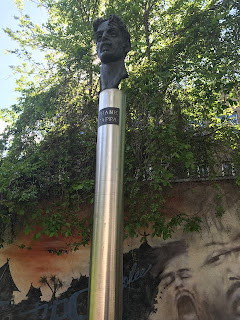