The heyday of Kovno Jewry came in the early to mid-nineteenth century.  By 1890, the population had already begun to decline, as many Jews, like my great grandparents, left--mostly for America. Quite a few were fleeing the threat of conscription into the czarist army, which took young Jewish men for up to twenty-five years.  This was often a death sentence.  Even if, by chance, one happened to survive, one's Judaism commonly didn't.  Shimon and Mendel Finkelstein must have worried significantly over the possibility of being drafted.  When the Finkelstein family departed Kovno for America, they were going to a less pious--but much safer--land.

The Finkelsteins were strictly religious Jews.  They were drawn to Yisrael Salanter's Mussar movement, open to new ideas but also deeply rooted in Litvak Orthodoxy.  Thus they represented one of the three major factions into which the Kovno Jewish community was roughly divided in the late 19th and early 20th centuries: the traditionally observant.  Another third were Zionists--mostly secular and devoted to the rebuilding of the Jewish homeland in Palestine.   The last group was comprised of the socialists,  communists, and Bundists, whose first loyalty was to the struggle for the workers' revolution.

Of course each of these groups was further factionalized into sub-groups, loosely held together through fierce internal debates.  Among the religious: Mussarniks and anti-Mussar, Enlightenment advocates and traditionalists.  Among the Zionists: Labor and Beitar, political and cultural.  And among the revolutionaries: Leninists and Trotskyites, socialist democrats and communists, universalists who rejected Jewish peoplehood (like Kovno native Emma Goldman) and those whose revolution, conducted largely in Yiddish, left room, at least temporarily, for Jewishness.

Kovno was an intellectually fertile, passionate place.  Every family member brought her or his own perspective to bear on the pressing issues of the day.  It was a city of rabbis and students, philosophers (such as Emmanuel Levinas, who was born here in 1906) and pioneers and revolutionaries and anarchists and writers and artists.

This vibrant city was full of schools of all sorts.  I've mentioned the yeshivot, where my male family members studied--Knesset Bet Yitzchak, named for the renowned chief rabbi of the city, Isaac Elchanan Spektor, and Knesset Yisrael, named for Yisrael Salanter.  But there were also more secular institutions for Jewish boys and girls alike.  Our tour brought us to the Schwabe Hebrew Gymnasium, the Jewish high school opened in 1927.  A year later, its graduating class included one of my favorite poets, Leah Goldberg.

She would go on to study German and Russian literature at Kaunas University, then went to Berlin and Bonn, where she earned her doctorate at age 22.  Upon her return to Kovno, Goldberg began writing Hebrew poetry, then moved to Palestine, with her mother, in 1935.  She became an acclaimed writer and literary scholar, founding the department of comparative literature at the Hebrew University in Jerusalem, where she taught until her death in 1970.  She is a much beloved poet in Israel, where many of her poems have been set to popular song.

Many years ago, I translated a series of Goldberg's poems called "Shirei HaNachal--Songs of the River".

I have always loved these pieces, which speak of the wonder I feel around rivers. So standing here, at her high school, after arriving in our ancestral home by kayak, via the Neris River from Vilna, I naturally reflected on those poems--and the journey that Rosa and I are sharing.  What a gift, this marvelous poet, Leah Goldberg, who loved both of her homelands: Lithuania, the land of her birth, with its verdant forests, soft air, and meandering rivers--and Israel, her chosen land, with its ancient sacred sites and cleansing deserts.

Songs of the River

A chorus of small voices

The River Sings to the Stone

I kissed the stone in her dream’s chilly calm,
For she is the silence and I am the psalm.
She is the riddle and I am the clue;
The same ageless source gave birth to us two.

I kissed the stone, her lonely flesh.
She’s the vow of the faithful, and I, faithlessness.
She is eternity, I’m transformation;
She’s creation’s secret, and I—revelation.

I know, having touched her mute heart as I purl:
I am the poet and she is the world.

The Tree Sings to the River

The one who bore my autumn gold,
Swept off my fallen leaves, so dear—
Will witness my spring when it unfolds
Anew with the turn of the year.

My brother, the river, always the stray,
Ever-changing, yet one, renewed every day
Between his two banks, he splashes and sprawls,
Flowing as I do between spring and fall.

For I am the blossom and I am the fruit,
I am my future and I am my roots,
I am the tree-trunk, barren and strong,
And you are my days, my season and song.


The Moon Sings to the River

High in the heavens, I am the one
In the waters below, I am many.
My likeness, my image, my twin
Looks back from the river at me.

High in the heavens, I am the truth,
In the waters below, I’m deceit.
My likeness looks up from the river,
My image conceding its fate.

Above I am shrouded in silence,
Below, music plays everywhere.
High in the heavens—I’m God.
In the river, I am prayer.

The Girl Sings to the River

Where will the stream carry my little face?
Why does he tear at my eyes?
My house is so far in its evergreen glade,
Sad are my rustling pines.

The river seduced me with sweet songs of praise,
So farther and farther I roamed,
Drawn by his music, which called out my name,
Forsaking my mother’s home.

And I am her only one, tender in years,
Now before me the cruel waters rise.
Where will the stream carry my little face?
Why does he tear at my eyes? 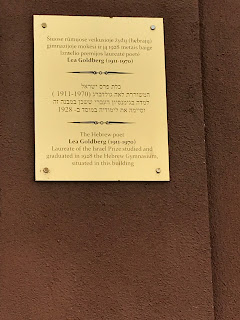 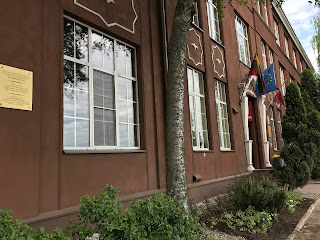 Our next stop is back at the Choral Shul, where I began the morning.

We speak there with Mausa Bairakas, one of the leaders of the congregation, who I met earlier.  This time he talks in Lithuanian, while our guide, Jonas, translates for us.  Mausa tells us about growing up here in Kovno, where his family has lived for nearly three hundred years.  We ask about his experience with the community; he sighs and says that things are "complicated."  The Jewish community is prospering--and assimilating away.  There are strong bridges to the non-Jewish world--and lingering anti-Semitism.  Hope and fear,  passion and apathy.  And, still, factions: secularists and Yiddish revivalists and Zionists and religiously observant.  Mausa--who identifies strongly with the religious camp--shrugs his shoulders: "Like everywhere else."

And so, in the last shul standing in a city that was once filled with them, much is new.  And much is old, too. 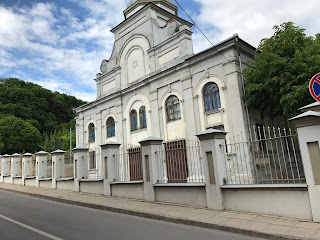 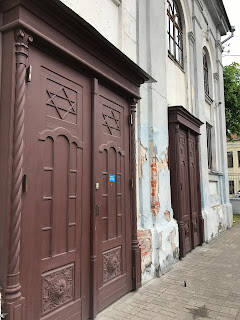 We leave the shul and enter a nearby courtyard.  Kovno is filled with hidden spaces in all sorts of unexpected places--but this one is extraordinary.

Upon moving into a house on E. Ozeskienes street, tucked away in a quiet corner near the Choral Shul, Lithuanian artist Vytenis Jakas uncovered numerous stories of the courtyard's pre-war Jewish residents.  Those tales--and lives--became the basis for a street art gallery featuring pictures of those Litvaks and scenes from their lives.  It's a poignant and beautiful tribute to the world that was, and a source of inspiration to all who are working to create a progressive and open community here today. 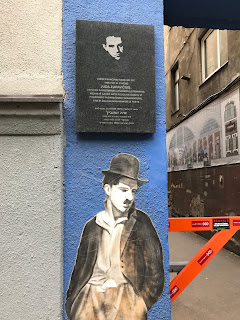 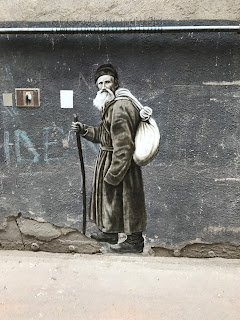 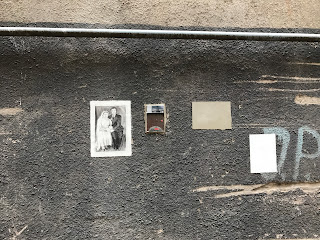 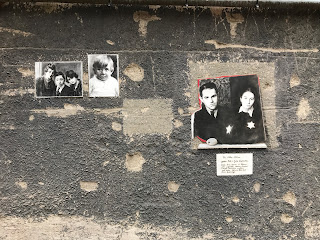 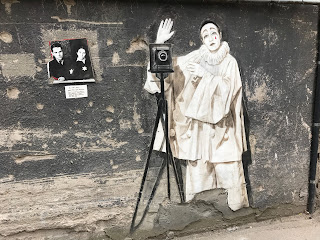 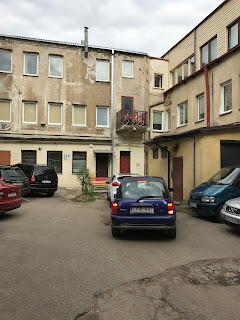 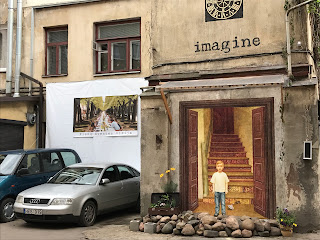 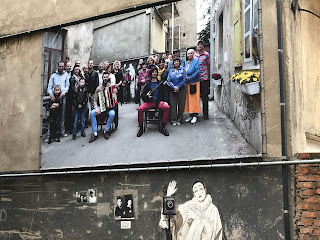 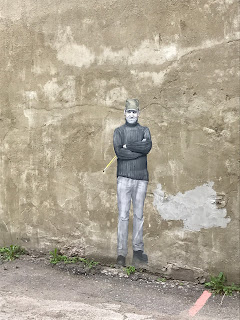 Thank you, Mr. Jakas, for your generosity of vision.

We stopped briefly at the statue of Daniel Bolskis.  This Jewish singer spent just a few years in Kaunas before his premature death in 1931 but he is one of the most important figures in the history of Lithuanian music.  He was among the first popular artists to sing in Lithuanian.  Today, it is a common practice to fill his open hand with fresh cut flowers. 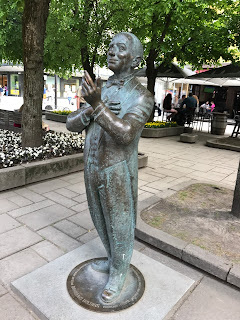 The former Nachalat Yisrael Kloiz (synagogue) now serves as the city's Jewish community center. Alas, it is not open when we stop by on Shabbat afternoon.  But it's good just to see it--a vestige of active Jewish life.  Only a tiny remnant survived but yes, we are still here. 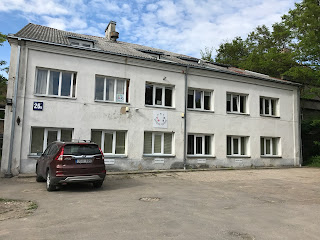 The Kovno region is now a city built on three rivers--the Neris, Nemunas, and Nevezis.  We are paddling all three.  Originally, each sector was a separate town: Kovno and Slabodka and Aleksotas. Today they have merged into a single urban center.  Our guide likened it to Pittsburgh, also built on three rivers and marked by the many bridges spanning them.

But those dividing lines were once very important.  Aleksotas, on the south side of the Nemunas, was, for a time, a world away from Kovno and Slabodka.  After the Russians took control of most of Lithuania in 1795, Aleksotas remained part of Prussia.  Even after 1864, when it was annexed into the Russian empire, it retained its own laws and persisted in using the old Gregorian calendar, which differed from the revised Julian calendar by 12 days.  As a result, residents joked that the Aleksotas bridge was the longest in the world, because it took two weeks to cross! 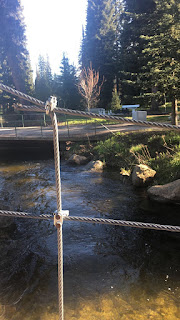 We ended our tour at the train station--where there is a moving memorial to Chiune Sugihara, who, as noted earlier, continued to issue visas until the very last minute, throwing them out the moving railroad car as he departed from here.  It was a fitting place to bid farewell to Jonas--and mark the end of a remarkable Shabbat. 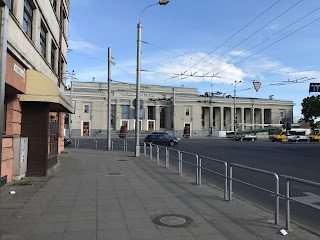 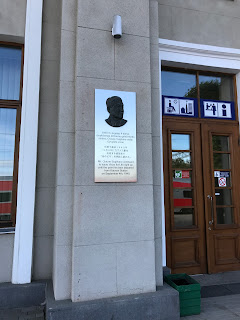 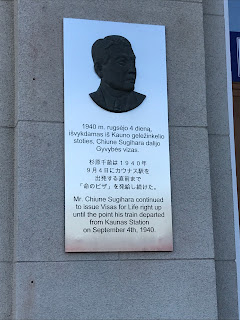 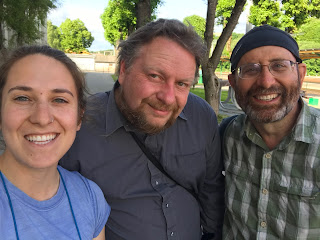