Despite the hill, I slept well.  Benadryl definitely helps.  I'm wakened by a summer storm at 7:30 am, but go back to sleep until almost 9:00 before I get out of bed, rising, thankfully, to bright sunshine. I'm grateful.  Since we made decent time on the river yesterday, even with all of the logjams and obstacles, we should have a fairly relaxed schedule today.

Lunchtime
This morning brings the trip's first "rapids": a couple of small rock ledges under a picturesque old bridge. We line the boat down.  Below the bridge, it's pretty smooth paddling, except for a confusing junction or two where we make some wrong turns.  Passing through the dense marshes, the river becomes labyrinthine, and the current is so weak--practically non-existent--that it's difficult to distinguish downstream from up.   Thankfully, Rosa is an superb navigator.  Using Google Maps on her cell phone and, even more impressively, underwater riparian flora, she plots our course.   With her engineer's mind for problem solving, she learns to look closely at the plants beneath the surface: the direction they are bending indicates the stream's flow. 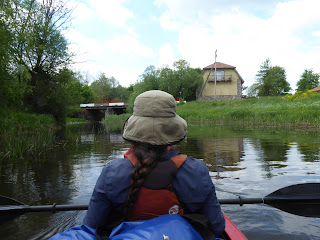 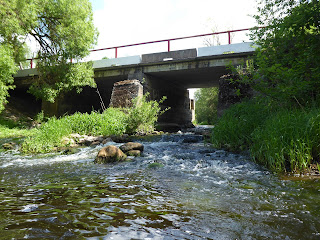 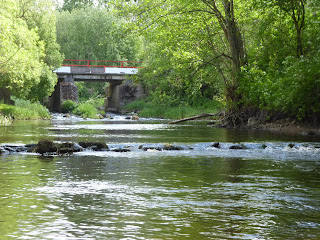 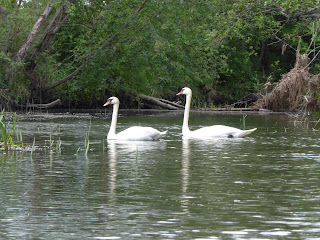 Yesterday we covered a surprisingly good distance after our initial challenges, speeding through four pages of my homemade river maps.  Today we progress much more slowly.  When we break for lunch around 1:30, we've yet  to pass map five.  I think the scale must be off--alas, my DIY Google Earth maps follow neither rhyme nor reason here.  Unstable weather hasn't helped, either.  It's sunny one moment, deeply overcast and windy another.  We're hoping that calm sunshine prevails but we're prepping ourselves for rain. At least we didn't wake up with the itchy tell-tale signs of poison ivy. Hopefully we don't develop it any time soon!

In my morning davening, I focus on a phrase from the blessing that opens P'sukei d'Zimra, the Psalms of Praise:

Baruch sh'amar v'haya ha-olam--Praised be the One who spoke and the world came to be. . .

Commentators note that while this most obviously refers to God, who, in Genesis, creates the world through speech, it also reminds us that we humans, shape our worlds with our words.  Unlike the Holy One, we do not miraculously generate life, ex nihilo, but the words we utter do, indeed, significantly define the environment we inhabit.

Still, with all this focus on words, here by the waters of Lita, we are also acutely attuned to the silences: the complex chorus of Jewish voices--lives, prayers, deeds--so cruelly muzzled and annihilated.  The Litvak community is gone.  But they left us a legacy of words and multi-vocal wisdom: Zionist, Bundist, Talmudic, sacred and ordinary.  I listen for their words and hope to catch glimpses of their worlds in both speech and silence.

**********
Evening
The afternoon is challenging.  Shortly after lunch, we arrive, quite unexpectedly, at a steep, impassable cement dam. Fortunately, there's a weathered Lithuanian farm house right beside the dam, and the resident family members are all out sunning themselves in their riverside yard.  One of them--a thirty-something man with a young son--greets us in English.  He grew up in this home but now lives in the UK and is here visiting his parents.  He directs us to a portage trail along the left bank, giving us permission to carry our boat and supplies across his family's property.

The path runs around 400 meters, so shlepping our food and gear and then the heavy kayak itself to the put-in, downstream of the dam, takes multiple, rather arduous trips..   When we finally finish, we rest for a few minutes, re-pack, then slip the boat back into the river, fatigued but also satisfied by a rigorous job decently done.

A little later we hit another, much smaller dam.  This time we can walk the boat through a breach. Still, today has required a great deal of patience.  When evening arrives, we haven't even made it through two complete map pages.  That means a long haul tomorrow, including passage through the canal connecting our current river, the Levuo, to the larger Nevezis, which we will paddle back to Kaunas. 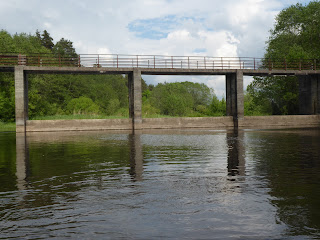 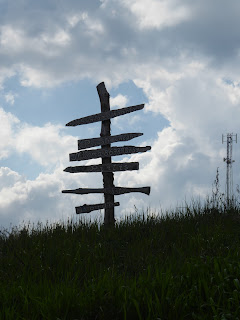 We stop a little earlier than usual, exhausted.  Thankfully, after a short but demanding day, we find our best campsite of the trip so far.  We're perched high above the river, in an expanse of soft, green grass, sheltered by a grove of pines.  It's less buggy than most of the places we've been, which is a relief, given the copious mosquito bites we're accumulating.  We set up camp around 5:45, enjoy a dinner of quesadillas, and then a long, quiet evening, tossing the frisbee, playing gin rummy, then reading and writing until dark.  We have a lengthy paddle, with a lot of time to make up tomorrow, so we're grateful for this rest. 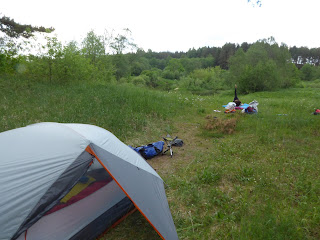 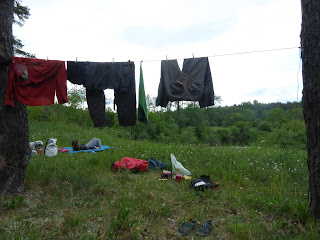 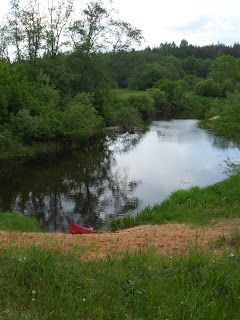 Today the river took us near--though not directly through--one former Jewish shtetl--Subacious, known in Yiddish as Subtosh.  A century ago, it was a fairly prominent Jewish town; in 1897, the 376 resident Jews represented 45% of the total population.  Only 50 or so remained in 1940, as most departed, either for bigger cities in Lithuania or the United States, South Africa, and Palestine.

The Jews of Subtosh worked in the professions typical for their time and place: grocers, butchers, bakers, tailors, textiles. Many were Zionists and, as usual, they divided along lines of politics and religious practice: Labor, Revisionist, Mizrachi, etc.  In the end, of course, the remnant who did not emigrate were murdered together in the forest, regardless of ideology.

Pinkas Kehillat Lita notes that one of those who got away before the genocide was Ephraim Frisch. He moved to the United States with his family in 1888, when he was just 8 years old, entering the country through the Great Lakes port of Duluth, Minnesota.  Ephraim was largely raised in the US, but inherited the classic Litvak penchants for religious scholarship and political activism.  His maternal great grandfather, Rabbi Alexander Sender, was hailed in the Old Country as a gaon, a Talmudic genius, and his cousin, Leonard Frisch, was an American Zionist leader and editor of the Twin Cities weekly American Jewish World.  Ephraim grew up in Minneapolis, then studied to become a Reform rabbi at the Hebrew Union College, where he was ordained 1904.  At his first pulpit, in Pine Bluff, Arkansas, he supported a local African-American minister who hosted bi-racial gatherings in the pre-civil rights south.  Frisch also openly criticized the governor for invoking Jesus in a Thanksgiving Day proclamation.

In 1912, Ephraim Frisch moved to Queens, and a few years later founded the New Synagogue in Manhattan.  That congregation's credo stressed "humanitarian deeds, social action, flexible rituals, and liturgy augmented with secular readings."  In other words, it was a liberal Reform synagogue of its place and time--a long way from Subtosh.  Like many--though not all--of his classical Reform rabbinic peers, Frisch unequivocally rejected Zionism.  While many back in Subtosh dedicated themselves to the creation of a Jewish state, Frisch publicly referred to the 1918 Balfour Declaration as "a menace."

In 1923, Ephraim Frisch of Subtosh became the rabbi of my brother's current congregation, Temple Beth El in San Antonio, Texas.  During his tenure there, he was a lighting rod for controversy in this conservative, formerly Confederate state.  He openly criticized compulsory Bible reading in the schools, denounced the city's squalid, segregated slums, and preached support for FDR's New Deal. In June of 1942, the congregation's board forced him into an early retirement.  He moved back to New York, where he died a bitter man.

My grandfather, Rabbi Joseph Fink--himself a descendant of Litvaks--must have known his older colleague, Ephraim Frisch of Subtosh and San Antonio.  I wonder about their relationship.  Did they talk?  They certainly shared many interests, including social justice and scholarship--both born of their Litvak legacy.

From Subtosh to San Antonio.  Or Slabodka to Buffalo, New York.

It's a long and winding road. 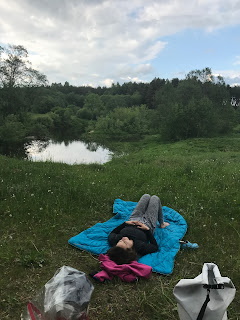 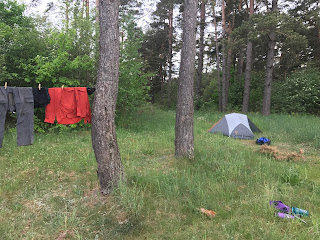 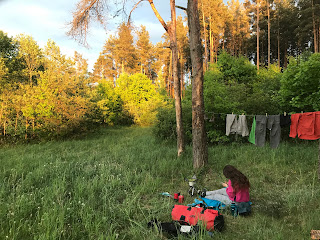