Today's forecast calls for sunshine but this morning brings a dark, damp blanket of chilly cloud cover. At least it isn't raining--yet.

In my davening, I'm struck by a conjunction of passages.  First, after the Shema, where we segue directly into the blessing giving thanks for God's redemption with the words: Adonai Eloheychem Emet--The Eternal One, our God, is Truth.  And then, as we move through Mi Chamocha, the words from the Song at the Sea that end this blessing, praising the Holy One as our constant source of liberation: Oneh l'amo b'et shav'am elahv--You answer Your people's call whenever they cry out to You.

Praying these words, on a literal level, here in Lithuania is galling.  Some parts of the traditional liturgy still work, even in this ghostly landscape, without too much dissonance.  Standing by the wooded banks of the Levuo, I can, in good faith, chant Yotzer Or, praising God's creative power in nature.  Ahavah rabah, singing praise for the gift of lifelong learning that is Torah?  Yes.
But can I honestly praise God as a reliable source of liberation, in every age, when the Jewish people cry out in pain?  My gut churns: No!  How can I daven these words here in the murderous forest, in the shadow of so many once-thriving and now annihilated Jewish communities?  The siddur claims that God is, first and foremost, passionate about truth.  So where does the truth lie here?  How can we affirm God as Liberator and maintain our integrity, here where so much innocent blood was shed, where so many of our people cried out in vain--while God turned a deaf ear?  How can I pray faithfully to the One who, instead of delivering us, as promised, watched idly over the slaughter.

Can we shift the paradigm?  Read metaphorically?  Seek God's liberating power as a moral force working within us, rather than supernaturally from without?  Can we see look to this passage from the siddur not as a statement about God's omnipotence but as inspiration and imperative for our human efforts to repair the world, to bring redemption to ourselves and others?  I pray that we can, and that upon returning home, I might redouble my commitment to such a reading and the ethical response that it demands.

Lunch near Paliuniskis, after a productive morning.  A little over a week into our journey, we are getting in shape, growing stronger in our paddling--and the river is now mostly deep enough for our boat, so there's much less hopping out to drag our load over rocks and sand.  We amuse ourselves by watching a mother duck and her seven ducklings scurry around each riverbend to keep a comfortable distance ahead of us.  This turns into a kind of comic game: just as we catch up to the flock, off they go again, motoring downstream, then resting calmly until we approach once more. After an hour or so, we wonder if the ducks will ever stop to let us pass, and turn themselves back upstream.  Finally, the mother does just this.   Three of the babies follow, but four ducklings keep pressing forward, separating from their mother and siblings.  Forty five minutes later, somewhat to our surprise, the stray four muster the wherewithal to turn and paddle back to the rest of the family--and Rosa and I must find other entertainment.

A little after noon, the sun emerges, so as we enjoy our lunch break, it's a gorgeous day.  I'm especially grateful for the warmth, because I'm feeling a tad sick--sore throat, achy muscles, runny nose.  I'm trying to flush my system with lots of water, hoping to avoid a full-on cold.  So far, so good.

Our lunch spot is the best yet--a sweet pocket park in a small village right along the river by a gentle rock garden. There are several picnic tables, which we use both for eating and airing out our gear--which is getting pretty musty. 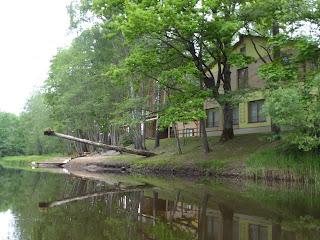 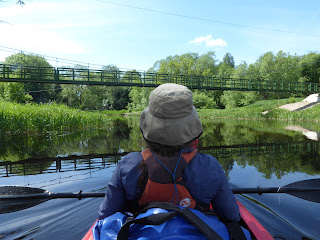 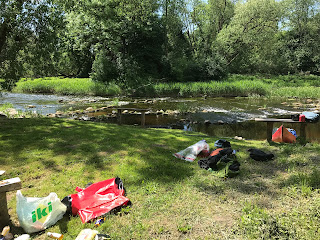 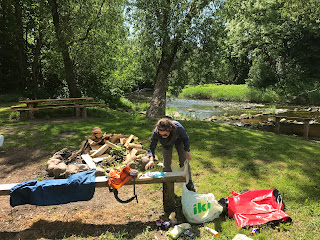 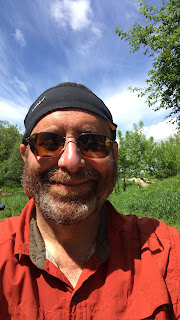 The nearby town of Paluniskis was known in Yiddish as Palunishok.  A few Jewish families lived here from  the 1880s until the First World War when they,  like my Litvak ancestors, largely left for the New World.  Those in the next small town that we will reach downstream, Piniava/Pineve, were not so lucky.  There,  nearly half of the 127 residents on the eve of World War II were Jews.   In June of 1941, after the Nazi invasion, Lithuanian nationalists took control of Pineve.  A few weeks later, they arrested the entire Jewish community--their longtime neighbors--and led them to the district center in Panevezys.  From there, the Pineve Jews were held in captivity with their brothers and sisters from across the region, then murdered in the Pajuoste Forest on August 23, 1941.  Their townsmen and women confiscated their property and belongings.

We arrive, successfully, at the canal connecting the Levuo and the Nevezis.  From the beginning of our expedition, I've worried about this stretch of paddling: Will we find the canal?  And if we do, will it be full of water or just a long, dry ditch?  Even our local expert, Justas, doesn't know what we'll encounter.  Thankfully, we reach the canal and discover that yes, it's still carrying water.  We turn in and about ten minutes later arrive at a dam, which we're expecting this time, based on the map.  At first glance, it looks like we'll  have to make a formidable portage around either bank but instead, we manage to haul the boat over the concrete wall and then slide it down the other side, saving a lot of time and effort unpacking, shlepping, and packing again.   This proves to be a morale booster for Rosa and me.  Earlier in the day, we'd gone through a bit of a rough patch as as team, getting cranky with one another as we ricocheted between rocks hidden beneath the stream's surface.  Now, our felicitous passage over the dam lifts our spirits.  We whoop and laugh and holler about "not giving a dam" and then continue down the canal for another thirty minutes or so to our campsite.  It's far from ideal--literally in the middle of a well-trodden trail, and extremely buggy--but at the end of an arduous day, still very welcome.  We feel good as we pull out of the water, our burdens lightened by the pride of accomplishment and hard-earned exhaustion.

We set up camp and eat pasta with cheese, in honor of Shavuot, the Festival of the Giving of the Torah which arrives with tonight's very late sundown.  It's not the traditional dairy feast of blintzes and cheesecake, but will suffice.  I get a weak but adequate cellphone signal and call home to wish Janet and the kids an early Chag Sameach, a happy holy day.   Then we light candles, make the festival kiddish over Lithuanian mead, and celebrate with a stroopwaffel. 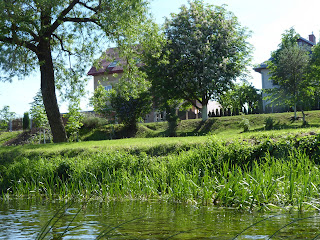 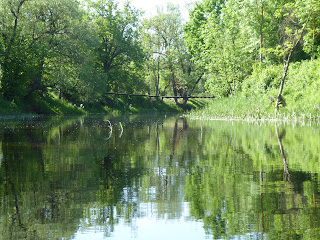 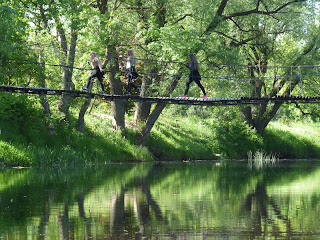 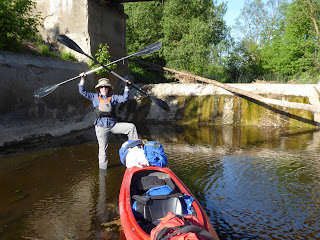 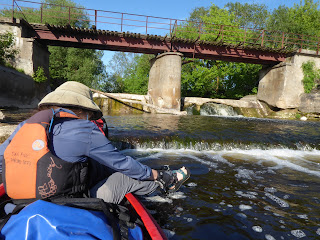 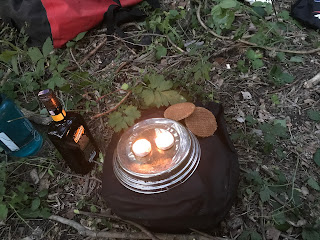 In his memoir of life in Keidan--my ancestral home where we will, hopefully, arrive in two days following the Nevezis River--Boruch Chaim Cassel writes about the days leading up to Shavuot (or as he writes, in his Ashkenazi Hebrew/Yiddish, Shevuous) as he experienced them in his boyhood. Cassel lovingly recalls playing outdoors after heder (Jewish elementary school), enjoying the lengthening daylight.  From the start of this Jewish month of Sivan, the children only went to school for half days; during the rest of the time, they would explore along the river, collecting grass to decorate the floor of their home for the festival.  Cassel writes:

As we return from shul after evening prayers, and Father makes the holiday kiddish over raisin wine, this holiday feels altogether different from others like Pesach and Sukkos.  First the dairy supper, which was eaten only during Shevuous, with farfel-tzimmes and saltenosis (?) filled with cheese and fried in butter and sour cream, and then a strange sense of freedom.  Father sits down to say the tikkun Shevuous prayer, and I am outside with the children, free as a bird.  Mother doesn't even chase us to bed. . . .This is how our world spent the holiday.  It was like a long-overdue vacation.  And that is why, truly, Shevuous has remained in my memory as the happiest holiday of my youth.

No blintzes or saltenosis--whatever that might be--for us.  But plenty of time outdoors along the riverbank under the almost endless twilight.  We're not exactly observing a typical Shavuot here on the canal connecting the Levuo and the Nevezis.   There's no synagogue in sight, and Rosa and are both far too tired to stay up all night for the traditional tikkun layl Shavuot study session.   No day off, either--we'll paddle tomorrow, in order to make it to Kedainiai by Shabbat.   But freedom and gratitude?  These we have in marvelous abundance!  And bow tie pasta, a good Eastern European Jew-ish dish.  As the festival approaches, I feel deeply blessed to share this wilderness journey with Rosa, and to learn the Torah of our family, our history and our heritage, together here on the water. 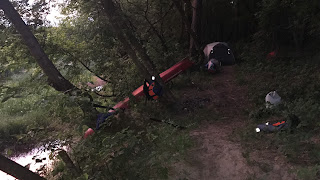 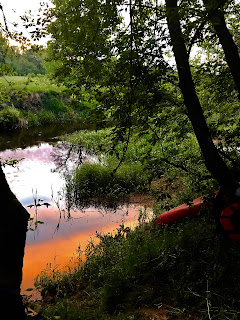