We wake to chilly rain.  But over the course of the morning, it eases, and our hot tea at breakfast revitalizes me, body and spirit.

In my davening, I'm struck by one of the opening blessings: "Praised are You, Eternal One. . . Roka ha-aretz al ha-mayyim--Who founds the earth firm upon the waters."

These days, we spend much more time on the water than the land.  I love the rivers--there is nowhere I would rather be--and still, this experience really does help me appreciate solid ground. Every time I get out of the kayak after a long stretch of paddling, I experience "sea legs"--a state of wobbly and weak imbalance--before I re-orient and feel the earth again, firm beneath my feet.  I am grateful for both: the water that sustains and carries us, and the land--comfortable, steady, solid.

The skies are grey for most of the day but the rain more or less holds off.  We make good time, and stop for lunch at 1:30 on a sandy island on the outskirts of Kaunas.  Rosa and I like the surrounding houses, which are all unique, so eclectic and different from one another: large and small, contemporary and vintage, brightly painted and greying wood.  Our next stop will be Kaunas--in Yiddish, Kovno--where, after the confluence of the Neris and Nemunas, we will meet our contact, Egidijus,  at the appointed take out, around a mile upstream on the Nemunas. 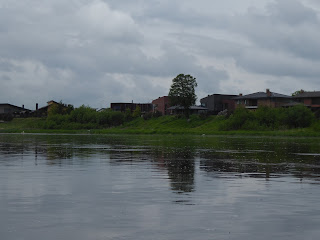 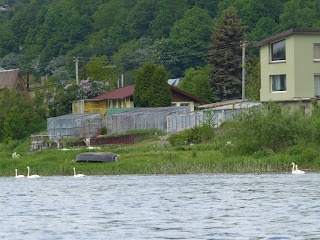 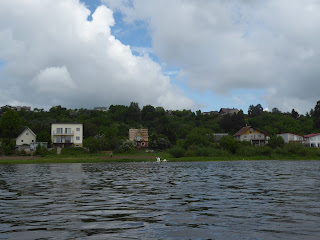 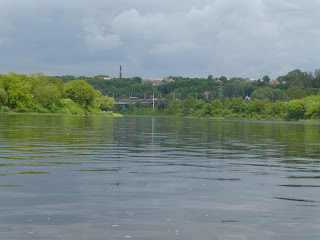 Kovno was the second-biggest Jewish center in Lithuania, after Vilna.  My great great grandparents, Judel and Feige Rivke Finkelstein, made their home here.  Though, to be more precise, the section of town where they lived was, at the time, distinct from Kovno, on the west bank of the Neris. We'll pass the neighborhood on river left as we come through town.  Now it's called Vilijampole, but back in the day, it was known as Slabodka.  In his memoir of growing up there, in a one room hut with a dirt floor, Rabbi Shimon Finkelstein notes: "When a Jew from Slabodka became rich, he moved to Kovno.  When a Jew from Kovno became impoverished, he moved to Slabodka."

Slabodka was originally founded by Jews from Keidan, where Judel Finkelstein was born.  From the start, it was the home of the most pious Jews in the Kovno area.  It had two renowned yeshivas.  The first was inspired by the founder of the Musar movement, Yisrael Salanter.  He taught for nine years in the Neviazher Kloiz, a synagogue named for the Nevezis River (where we'll be paddling next week), which passes through both Keidan and Kovno before its confluence with the Nemunas.  Later, in 1882, his disciple, Natan Tzvi Finkel founded the Slabodka yeshiva, Knesset Bet Yisrael, which focused on Musar teaching.    A rival yeshiva, rooted in the misnagdic tradition and opposed to the dissemination of Musar was founded in 1897 and named Knesset Bet Yitzchak, for the famous chief rabbi of the city, Isaac Elchanan Spektor.  The renowned Soloveichik family also had deep roots in Kovno.  Rabbi Shimon Finkelstein--and likely his brother, my great grandfather, Mendel-- studied with both Spektor and two of Salanter's  chief disciples, Rabbis Yitzchak Blazer and Yozel Horowitz. He was ordained by Rabbi Judah Meshil HaCohen, of Aleksot, the section of town where we will be staying for the weekend.

But not everyone in Kovno--or even Slabodka--was pious.  The community was also home to Bundists, Zionists, Communists and all sorts of other Jews.  The Haskallah--Jewish "Enlightenment'-was a strong force here.  Eliezer Ben-Yehuda, the father of modern Hebrew, visited the city in 1901; other famous guests included Moses Montefiore and Marc Chagall.

In 1897, just after my great grandfather left, the Jewish population of Kovno and Slabodka reached 25,448, making up 36% of the general population.  This made the Jewish community a relative majority in this multi-national and multi-lingual city, which was otherwise 25.6% Russian, 22.8% Polish, 6.8% Lithuanian and 4.7% German.

Alas, nearly the entire population was wiped out by the Germans and their local accomplices, who imprisoned the community in the Kovno Ghetto and then shot them--men, women, and children--into the ditches they had dug in the forest outside of town, in an area known as the Ninth Fort.

The Finkelstein family--Rosa and me--do not make a grand re-entry into our ancestral home.  Our take out spot is about a kilometer north--upstream--on the Nemunas, and as soon as we reach the confluence, we realize that the current is far too strong to paddle against for any real distance.  So get out and line the boat along the marshy shoreline, making our way through the muck and mud along the bank.  Eventually, we have to cross the river to meet Egidijus on river right.  This entails paddling furiously, against the stream, until we near the cement wall reinforcing the far bank, where we pass under a large bridge.  Finally we spot Egidijus and throw him a rope tied to the hull of our kayak. Luckily, he catches it, stabilizing us, and ultimately enabling us to complete the upstream passage with an exhausting, all-out effort, us paddling and him pulling hard on the rope.  At last we arrive at the takeout, where we load our kayak onto his van and toss our bags in the back.  He very graciously insists on driving us to our bed and breakfast, and when we arrive, he refuses to accept any payment for the time and effort. 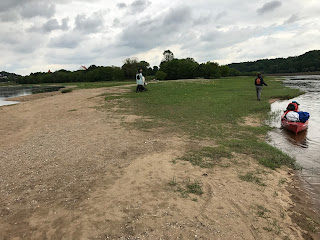 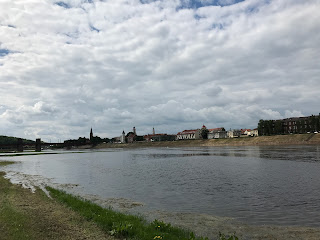 Our experience with Egidijus is yet another reminder that this journey is entirely a team effort.  Rosa and I are doing the paddling, but we could not begin to make this trip without the logistical support and tremendous kindness of many others.  Starting, of course, with Justus Pipiras, our sponsor, who made all of the arrangements--but also the many contacts who are helping us along the way, like Egedijus.  His assistance, encouragement, and graciousness are a beacon. 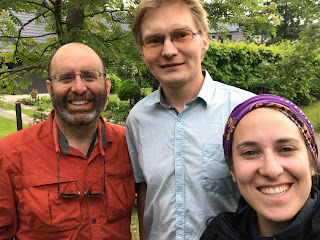 Egedijus leaves us at our residence for the weekend, arranged through AirBnB, in Aleksotas, the section of town where the rabbi who ordained Shimon Finkelstein once lived.  The accommodations are perfect--a beautiful home with a spectacular garden.  We spread our stuff out to dry, settle into our rooms, enjoy a delicious traditional Lithuanian dinner (minus the meat), then return to our rooms to light Shabbat candles.  We are so grateful for the comforts of civilization and rest of the Shabbat day! 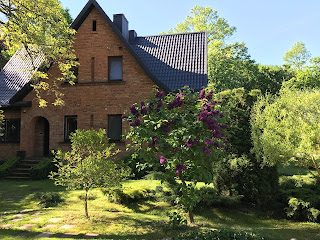