We're up and packing early, ready to go when Justas arrives at 10:00 am to take us to our next put-in, on the Levuo river.

It's a two and a half hour drive for us--and at more than twice as long for Justas, who started and will finish back in Vilnius.  He is devoting his entire day to our journey.  Again, I am awed by his generosity and enthusiasm for our trip.  We could not begin to do this expedition without him.  Over the next ten days, while we are paddling to Keidainiai and then on to Jurbarkas, he will be on his own trip, to Tenerife.  We're wishing him safe, productive, and enjoyable travels.

In mid-afternoon, we arrive at our intended put-in, just below the dam on the Levuo in the town of Kupiskis.  However, there's not nearly enough water in the stream to navigate, so we drive a few miles further, where Justas drops us off at a hastily contrived spot beside a small backroads bridge. It's not ideal.  The banks are muddy and steep, with no suitable place to park Justas's van and trailer, but we make the best of it.  We unload in double time, share quick goodbyes, then organize our gear by the riverside.  We pack the boat with our clothing, camping equipment and very heavy rejuvenated food bag, then set out. 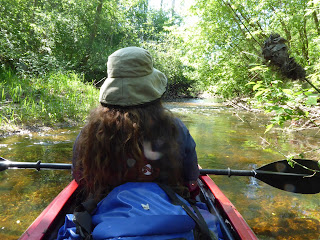 **********
Before World War II, the tiny town of Kupiskis (or, in Yiddish, Kupishok) was home to twelve hundred Jews--42% of the local population of 2830.  Our river journey through rural Lithuania is teaching us a lot about the nature and importance of pre-war shtetl life.  Most American Jews live in large urban areas and tend to think of ourselves as city folks.  Yet for much of our history here in Lita, we made up virtual majorities in scores of tiny agrarian villages.  This heritage is well worth preserving. Long before Zionism and our return to the land of Israel, Jews were living close to nature, in community with one another, surrounded by dense forests, green fields, and riparian watersheds.

Of course even in those rural villages, we often feuded bitterly amongst ourselves. Lest one romanticize shtetl life as bucolic, it is worth noting what Pinkas Kehillot Lita has to say about Kupishok:

Kupiskis Jewry divided off into two communities, the Hassidim and the Mitnagdim (Misnogdim or Opponents). As a result, the town had two official rabbis, one for each community (previously they had one rabbi for the whole town), but then they had two Shochtim (ritual slaughterers), two burial societies and four synagogues. Often, bitter quarrels arose between the rival communities. The Kashrut certification given by one was negated and declared Treif (not Kosher) by the other.

Toward the end of the nineteenth century, many Kupishok Jews emigrated, mostly to the US and South Africa.  Economic hardship took its toll, as did fires, which frequently ravaged Lithuanian towns and cities, with their preponderance of wooden structures to feed the flames.   Still, the shtetl managed to sustain itself until the Nazis arrived in June of 1941.

Days after the German invasion, Kupiskok filled up with Jews from neighboring areas, all fleeing the Nazis--and their murderous neighbors--to no avail.  In mid-July, the Germans established a small ghetto on Vilna Street and began to execute Jews in the forest outside of town.  Much of the killing was actually done by the Nazis' Lithuanian accomplices, including the local police chief and his deputy, and one of the high school teachers.  By the end of September 1941, not a single living Jew remained; over 3000 souls from Kupishok and nearby towns were buried in the swamps and woods.

A few Lithuanians tried to rescue Jews.  The village priest, I. Regauskas, attempted to save some of the Jewish students--but informers tipped off the Germans.  The local gentile doctor took in the rabbi's wife, Kh. L. Pertzovski and her friend,  B. Meirovitz, together with their children--but again, Lithuanian neighbors quickly discovered and informed on them. All were murdered.

And so this once vibrant Jewish community ceased to exist, with its Hasidim and Misnagdim and all the other warring factions dead, side by side, in the forest ditches.

Upon our launch, I sound the shofar, to announce our Jewish presence.

We jump in the boat and paddle off--but not for very long.  For the afternoon's first couple hours, we are not, as expected, in a river but a rather paltry creek.  The water level is, more often than not, too low for paddling.  Again and again, we bottom out on rocks and sandbars; from the start, we're spending much more time wading beside the boat, dragging it downstream, than in it.   Logjams prove even more challenging.  Downed trees routinely clog the entire stream, sometimes at intervals of every fifty yards or so.  Each time we pull up at a blockage, we plunge into murky water up to our waists and plod through thick brush, spider webs, brownish foamy scum, and the discarded plastic bottles and other detritus that accumulate at these logjams--then struggle to heave the boat over the morass.  And then repeat the whole messy procedure minutes later, again and again and again. 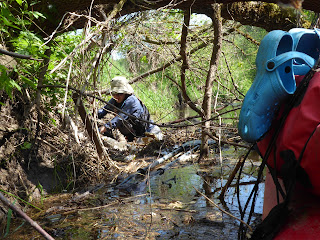 Rebbe Nachman of Breslov believed that we need challenges to strengthen our resolve.  He taught: the obstacle creates the desire.  Many teachers, across cultures, suggest that without difficulties overcome, a trip is just a pleasurable outing;  it is the tough passages that transform a journey into a pilgrimage. As the Talmud puts it: L'fi sachra, avdah--According to the labor, so is the reward.  If this is true--and I believe it is--then this afternoon was rewarding--and important--for Rosa and me. Yesterday--Shabbat in Kovno--was a monumental experience: leading services in my forebears' hometown, sitting at Chiune Sugihara's desk, walking the ghost maps of Kovno and Slabodka, in the footsteps of Judel and Shimon and Mendel and Toba Kagan Finkelstein--and Israel Salanter, Isaac Elchanan Spektor, Leah Goldberg, Abraham Mapu, and so many more.    Today's agenda is entirely different but no less critical: overcoming ordinary obstacles, pushing through where the river doesn't, working in partnership with my daughter.  So when, after a couple of hours, the obstacles gradually ease away and the creek, fed by tributaries, widens and deepens into a real river, meandering blissfully through tranquil wetlands, we feel proud.  Thankful for how our kayak carried us through, we decide to give her a name: Lita--the lovely, lilting traditional Yiddish word for Lithuania.  Lita, homeland of the Litvaks.  And our boat, our home on the rivers by which they lived.

Later, as day softens into evening, we hit a few more logjams, then struggle to find a camping spot. Eventually we settle for a site a stone's throw from the gravel road that parallels the river, just behind an old house--on steeply sloped, weed-infested ground.  It will have to do.  I'm a little worried about the dense overgrowth; I fear we may be camping in a thicket of poison ivy--and I know, from the burning and itching, that we are definitely ensconced in stinging nettle.  But we wash and scrub our exposed skin in the river, then put on long pants and hope for the best.

It was a hard day and essential day.  A good day's journey--and good day to have behind us. 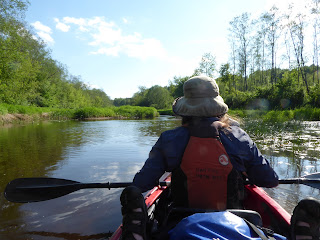 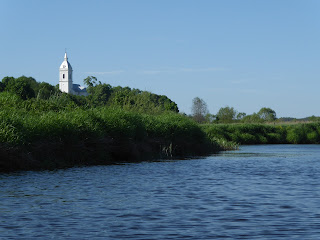 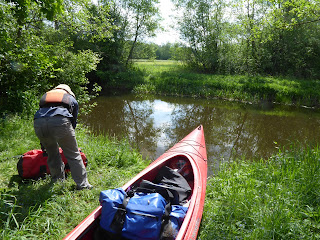 We retire to the tent.  I count the omer: forty eight, just two more days until Shavuot.

Now off to sleep, incline be damned, head up, feet down, rolling in our dreams with the earth beneath us.