I'm standing on the riverbank after breakfast, davening,  per my usual morning routine.  It's a gorgeous day, the honeyed sun warm on my face.  I sing the Sh'ma very slowly, Shhh-----mmmm----ahhh--Listen!  I hear the omnipresent chorus of birdsong, the music of the river flowing past--and then the unmistakable sharp percussion of gun shots (Yes, I know the sound of gun shots in the rural landscape.  I do not--and would not--own a firearm, but I am an Idahoan. . . )

It's chilling.  Hearing gunshots in this place, in the midst of my davening, sends a shiver down my spine.  I cringe and wonder: "How many were saying Sh'ma, like me, in this very forest, by the banks of this same river--as gun shots from the Nazis and their Lithuanian collaborators sent them to their death?"

I suspect someone is shooting targets, or just blasting away with a rifle, as folks are wont to do. There are too many shots, in too rapid succession, for this to be a hunter.  The shooter likely has no idea of how I react to his or her gunshots, how they summon up the most tragic ghosts of Lita's  Jewish past to which Rosa and I are heirs.   I tremble--then count myself among the lucky ones, listening here and now, at a safe distance, rather than seventy five years ago on a similarly warm early summer day. 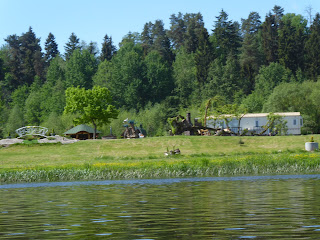 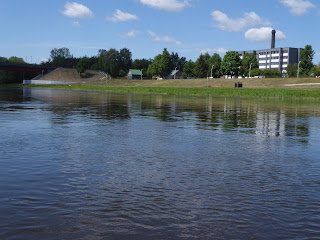 The morning's paddling is rather mundane.  We set out at 10 and make it into the town of Jonava around 1:00.  At a riverside park, we pull our boats up onto the bank, just below the city's lone bridge across the Neris.  The expansive lawn is uncrowded on this weekday afternoon, with just a few folks sunbathing and enjoying a late lunch.  We walk up to a bench beside a tall metal cross facing the river--a Catholic memorial of some sort--and gather our gear.  Then I pull out my phone and get on Google maps, to search for a memorial to the Jews of Jonava--or, in Yiddish, Yaneve--killed in the Shoah.  It turns out to be too far away for us to reach on foot, especially when we're reluctant to leave our boat and gear alone, unwatched, for very long.  But with my few words of acquired Lithuanian, I find Zydu Kapines Parkas.  Well, I know that Zydu is Jewish and kapines is cemetery and one need not be a rocket scientist to guess that parkas is park.   Jewish Cemetery Park.  I'm not sure what, exactly, that is, but it's just half a kilometer away.  So while Rosa opts to rest here and watch over the boat, I zoom in on the map (thank you, Google--we're finding this tool a great blessing on our trip!) and head into town. 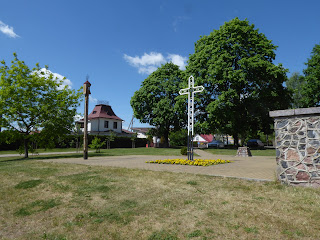 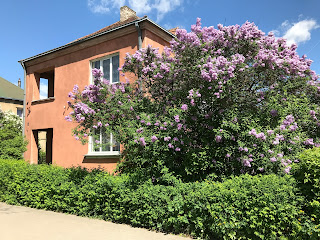 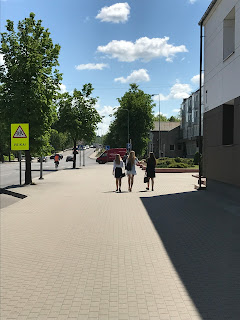 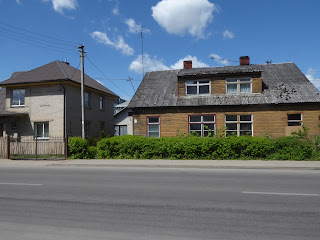 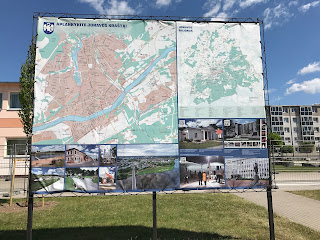 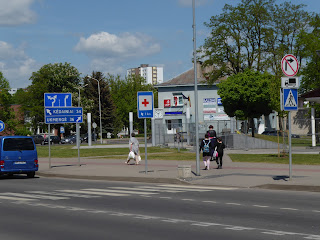 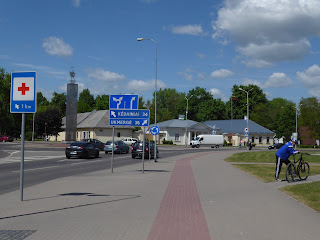 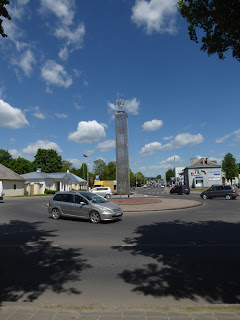 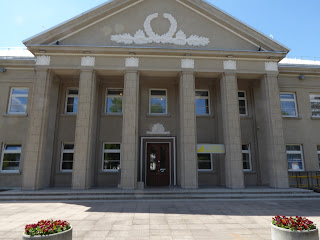 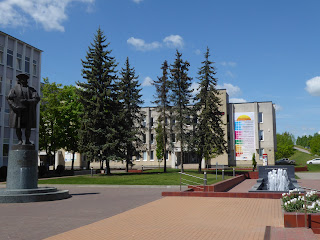 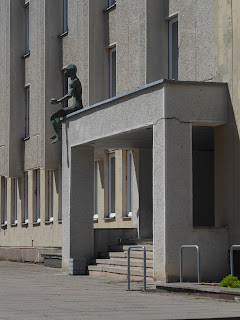 Jonava is a pleasant enough place.  I pass numerous pedestrians, fashionably-dressed, walking amongst bustling shops, a library and a cultural center advertising a forthcoming arts festival. Finally, I arrived at the Google destination and find. . . nothing.

Dilapidated houses, a gravel road.   Then I notice a few stones in an otherwise completely unremarkable overgrown field.  Well, that field was once the town's Jewish cemetery; now it is a "park" where folks walk their dogs amidst the crabgrass and dandelions. 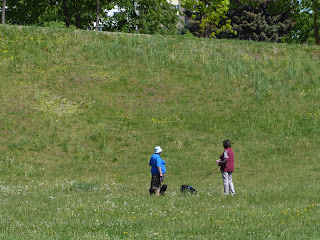 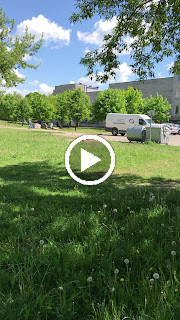 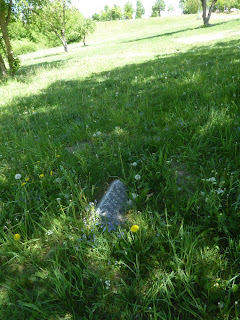 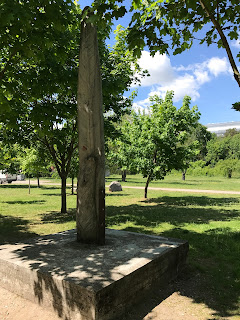 I find one lichen-covered marker, overgrown and askew but still intact, with a Jewish star on it. Shortly before leaving for Lithuania, I gathered a bunch of stones from the banks of the Boise River, near the Idaho Anne Frank Human Rights Memorial, with the intent to leave them at Jewish burial sites here.  I set one on the gravestone, along with a Hamsa bracelet that Jonah and I made.  Then I sing El Malei Rachamim, the traditional Jewish mourners' prayer, for the Jews of the city buried in this now-faceless field, and those murdered in the forests nearby.  I linger, pondering their destiny and my own: How much depends upon luck and fate, on being born in the right--or wrong--time and place!  How fortunate I am, blessed by the happenstance of history.   Then I walk back to meet Rosa, stopping in the market for a little beer and chocolate, which we share on the riverbank before heading back out on the river. 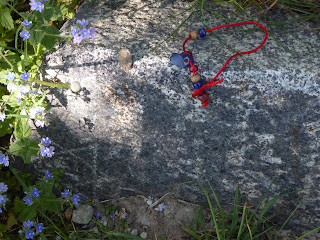 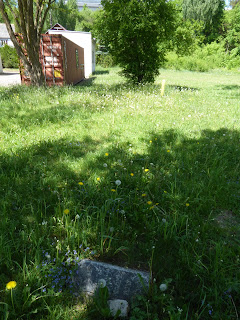 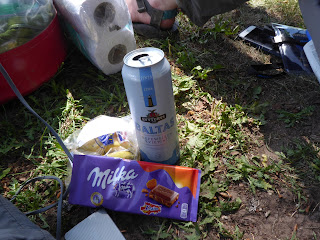 My Litvak ancestors were rabbis and rebbetzins, Torah scholars from the yeshivot of Keidan and Slabodka.  They match, in most ways, the pious images we tend to conjure of Old Country Jews.  But more often than not, that stereotype is wrong; there were many other types of Eastern European Jews, especially here in Jonava/Yaneve.

Samuel Goldsmith describes the residents of this community in his memoir, "My Yaneve":

It is true to say that Yaneve was never a center of Jewish learning. Some Lithuanian towns, Volozhin, Telzh, Lyda, Slobodka near Kovno. . .  used to be famous as places of Jewish learning. And then there was Vilna. Yaneve claimed no such fame. There were one or two great Talmudic scholars in the place, but they had come from other places and brought their learning with them. There was no Yeshiva in Yaneve. Nor was there a Jewish high school. All Jewish Yaneve had was a Hebrew primary school and a Yiddish school of rather low standing. The rabbis came from outside and so did the teachers. The children of Yaneve usually continued their education in larger towns.

It would be difficult to name a world-famous Jew who hailed from Yaneve. Here and there a scholar; here and there a painter. Neither of them very well known. But the Jews of Yaneve as a group made a profound impact upon Jewish life in the Diaspora. They were profound, devoted to Eretz Israel, stubborn fighters for Jewish rights. Every Jew within this group was a man and a brother. I cannot recall a really bad Jewish character in the town. I still like to say, “We men of Yaneve…”

Long before Israel and Zionism and back-to-the land kibbutznik pioneers, there were already plenty of tough Jews who won their daily bread by the sweat of their brows, living close to the earth--and the rivers.  Goldsmith adds:

A significant part of the Jews of Yaneve drew their livelihood from the river and the dense forests in the district. The trees used to be cut, rolled into the river, tied together into rafts with special ropes, and navigated downstream to Germany. For the Viliya [Yiddish for the Neris] flows into the Nieman [Nemunas], which flows into the Baltic Sea on the German side.  There were several specialties in this trade: the merchants, the navigators, and the middlemen. Some of this timber used to be bought by local Jewish furniture makers. Yaneve was – and still is – a world center of the furniture industry. Many other Jews made a living in subsidiary trades. There were leather merchants, smiths – gold and black -, cobblers, tailors, and grain dealers. My father was a leather merchant. . . There were some poor Jews, of course, but it was not a “Shtetl” as described by American Jewish novelists. Nobody opened up a shop and hoped that the Almighty will send him customers. The Jews in Yaneve knew what they wanted to do, and the craftsmen were well trained. The furniture made in Yaneve used to be sold all over the world.

Best of all I remember the expert navigators, who took the rafts down to the Baltic Sea. They were not unlike British seamen or Norwegian fishermen. It is the influence of long hours on the river or at sea. They used to eat and drink on the rafts. To be a good navigator, you had to have physical strength, agility, powers of observation and endless patience.

On this journey, I realize that I am drawn to both of these Jewish traditions--the scholars, represented by my rabbinic ancestors, but also the Yanover burlakes, the tough Jewish river rats of Yaneve and nearby towns.  I want to be a rabbi and a river runner, to embrace Yaneve and Slabodka.
And to remember that in the summer of 1941, the tough Jews and the pale Talmudic sages died in the same forests.
**********
We leave around 3:30 pm.   Earlier in the day, in the morning and early afternoon, it was sunny--but even then, we could feel the weather changing, with the incoming wind stirring up waves.  Now, the gusts of chilly, damp air blowing in from the west carry more than a hint of the Baltic Sea.  I suggest we paddle hard to make some miles before the squalls set in, and we do--but within thirty minutes, the heavens let loose a downpour.  Rosa puts on her raincoat; I just got soaked.  For a few minutes, we're pretty miserable, then we start to laugh at ourselves and before too long, we're having a good time, pushing through the rain, singing, and digging hard with our paddles, and then the storm blows out and the warm sun returns.

Around 6 pm we find a campsite--a real, dedicated campsite, high on the bank, river left.  It's hard work to get the kayak and all of our things ashore, but well worth it, as we enjoy a great night on soft, level ground, cushioned with pine needles, with a warming bonfire.  I string up a clothes line, where our clothing and gear dry out well in the 9 pm sun.  With a good phone signal, Rosa and I both send text messages, and I get to speak with Janet and Jonah.

A beautiful evening, the perfect end of an richly eventful day. 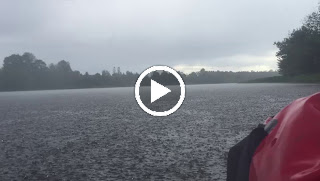 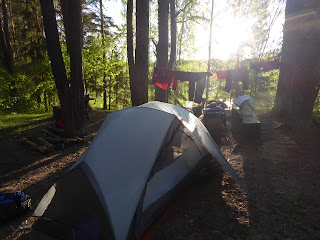 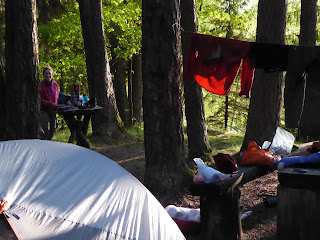 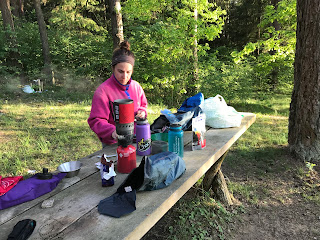 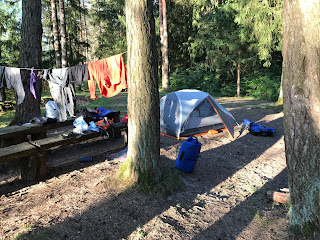 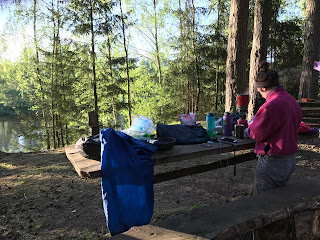 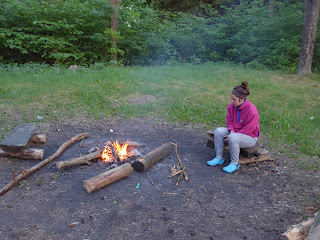