Note: I'm about a month behind and playing catch up.  More of that in days to come.  This is a current piece.

Unless you are reading this blog for the first time (in which case, welcome!) you know that I am descended from a long line of rabbis on my father's side.

What you may not know is that my mother's father and grandfather, Ray and Harry Hoffman, were printers.  For many decades between the two of them, they ran a large printing press in Buffalo, New York.  When I was a boy, one of my favorite parts of our frequent visits to Buffalo was going to the office with my Papa.  We'd get up early in the morning and walk through as they started up the presses.  Everyone knew my grandfather as The Boss, and he loved the plant like his own family.  And I loved it, too: the unmistakable smell of ink and machine oil mixing Papa's cologne, the roar of the press, bright lights and constant action.

My rabbinic ancestors learned, taught, and treasured words.  My Papa put them on to paper.

This confluence brought me here this evening. 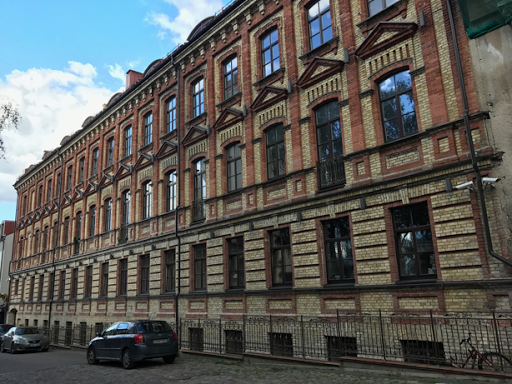 In a now quiet, out of the way corner of Vilna, I came to the building that once housed the Widow and Brothers Romm Publishing House.  They printed everything: Yiddish poetry and novels, Zionist works, popular reading.  But they are best known for their 1886 edition of the Talmud, which remains the standard throughout the Jewish world over 130 years later.  As the ultimate formatters and editors of the Talmud, their role in shaping Jewish learning and life cannot be underestimated.

Alas, as Wikipedia tells the story: "On the night of July 7, 1941, just days after the German invasion of Vilnius, [the current manager at Romm] Mathus Rapoport was taken from his home at midnight and was murdered by the Nazis. Thus came to an end the greatest Jewish printing house in the world. With the end of the Second World War the building was confiscated by the Russians. They continued to use the printing house after the war until the beginning of the 1990s but with no connection to Judaism."

This is where so many of the streams that brought me here meet, not far from the banks of the Neris River.  Rabbis Judel and Mendel and Shimon Finkelstein, my grandfather, Rabbi Joseph Lionel Fink, and my father, Arnold Fink.  And Harry and Ray and Inez Hoffman, and my mother, Karen Hoffman Fink.  Printers and teachers--all guardians of the word.

And the Widow and Brothers Romm, who took the words of Talmud and gave them to the world.
Posted by dan at 11:10 AM

Hi Dan. This is a beautiful post. My 3rd Great Uncle was Samuel Shraga Feigensohn, who managed Romm during the late 19th and early 20th centuries and supervised the publication of the Shas Talmud. My daughter and I are going to Vilna next week. Do you know how we can find the Romm building? Thanks, David