You wouldn't otherwise know it, reading this transcribed to my blog, but I am starting a new Rite in the Rain notebook today.  This journal is special, because Rosa gave it to me for Father's Day. 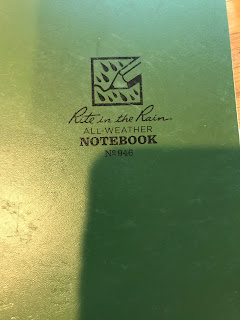 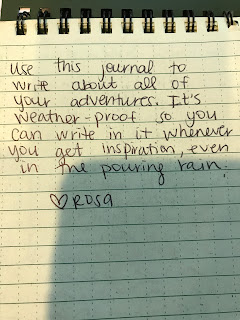 She has been an extraordinary paddling partner throughout this trip, doing more than her share of the heavy lifting, and almost all of the cooking.  What a privilege it has been to share the journey with her.  As for Rite in the Rain--it was a great gift.  Thankfully, it works perfectly, and there's been no shortage of rain.

Over the course of this pilgrimage, I've frequently wondered what we gain through the long and often monotonous days of paddling.

Rosa and I could have explored our family's roots in this country far more easily by automobile.  If we had chosen to drive, we'd have had significantly more time to explore our culture and connections in Vilna, Kovno, Keidan,  and even tiny Srednik.  Indeed, had we gone that route, we'd undoubtedly have made it into the center of Srednik yesterday rather than laying over briefly on the  overgrown bank outside town, shivering from the cold and damp.  Traveling through this relatively small country by car would have allowed us to focus more intensely on our destinations.

Instead, we dedicate most of our waking hours to the journey itself, paddling downstream through the hinterlands, past the expanses of farms and fields and forests that make up most of Lithuania. We're not the first landsmen to voyage that way.  As we've seen, plenty of Jewish river rats preceded us, transporting timber to the Baltic Sea.  But that was not my ancestors' path.   Rosa and I descend from scholars, who spent most of their time studying Talmud, eking out a living, and raising their families in Lita's larger towns and cities.

Our long hours on the river can be arduous, yet despite--or really, because of this challenge--I wouldn't do this journey any other way.  As Talmud teaches, l'fi avdah, sachra.  According to the labor, so is the reward.  The adversity, cliche as it sounds, really does prepare us to better appreciate the beauty.  It's the obstacles that make the trip a pilgrimage rather than a pleasant month of heritage tourism.  Daily life was difficult for the Litvaks, whether they lived in the city or the countryside.  I like to believe that we experience their world a little more authentically when we enter it with some rigor. I am not so naive or self-centered to believe that our challenges even remotely approach my ancestors' travails.  Thank goodness.  Still, I hope that by taking the river route, we are travel in the spirit of Jewish Lita.  For this, I am grateful.  And also stiff, sore, and tired.

We enjoy a leisurely lunch at the pier/park at Ploksciai.  This hamlet was once home to a modest Jewish community: 39 Jews out of 455 total residents in 1923.  Here, as in so many of the shtetlach that lined the the Nemunas, the Jews were merchants and craftspeople, hard workers who tended to embrace the Zionist cause.  The Jews of Ploksciai, and Raudone, on the opposite bank, were historically linked to local aristocratic dynasties; Raudone's large castle still stands.  As we paddle past that riverside stronghold, I'm struck by how much the community's story offers a kind of microcosm of European Jewish history.  Jews arrive in the district at the invitation of powerful landed gentry, whose economic interests are served by Jewish bankers and merchants.  Inevitably, the local peasants grow resentful of the nobility, who keep them in a state of serfdom. Powerless against their true oppressive overlords, the serfs scapegoat their appointed lenders and tax collectors, erupting in a series of murderous pogroms against the Jewish community.

It's an age-old tale, a cycle dating back to the biblical Joseph, who served as second-in-command to Pharaoh in Egypt--and whose descendants paid the price for the enmity this aroused among the Egyptian populace.  Time and again this ugly pattern repeats itself:  whenever a few Jews gain position and prestige in the royal court, their success provokes a vicious wave of populist resentment against the Jewish people as a whole.  Once that backlash begins, the truly powerful do not hesitate to throw us to the wolves in order to protect their own interests.  It's abhorrent--and it works.

Hence Zionism's enormous appeal to the Litvaks who populated these riverside shtetls.  To be a student of Jewish history is to understand that diaspora Jews are, by definition, vulnerable to horrific forces beyond our control; the only way to take our fate into our own hands is to exercise political sovereignty in a Jewish state in Israel.  Unfortunately the Zionists who lived in Lita in 1941 did not survive the Shoah.

But, thank God, their vision did.

Here's a section of a poem by the great Yiddish writer, Y.L. Peretz, first published in 1888.  It is eerily prescient of what would tragically unfold half a century later along these riverbanks:

Life is like a river; we are fish.
The water's wholesome and fresh
and we would swim forever,
but for a black figure
on the riverbank.

There Satan stands,
in his hands
a fishing rod,
and catches fish.

With a worm that eats the dust,
a little lust,
a moment's pleasure,
the line is baited.

Hardly a flick
and the pike flies in the pan
to be fried or roasted
on the flames of hell.

May his name be obliterated!
we know whose work it is--
Satan's--
and why it works so well. . .

Enough philosophizing.   It's a delightful day on the Nemunas.  In another 90 minutes or so, we should reach our destination for the evening, probably near Gelgaudiskis.  We're so grateful for a placid, summer day! 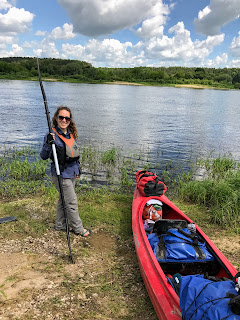 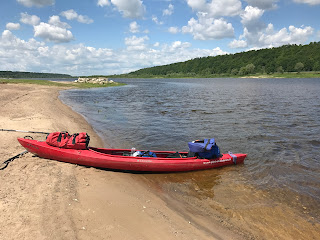 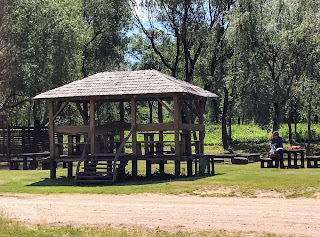 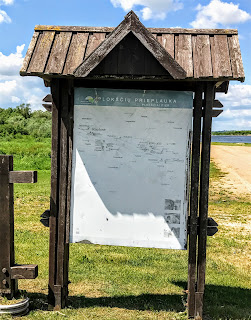 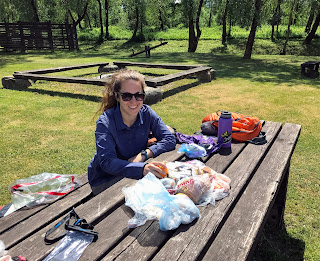 Of course I speak--or, in this case, write--too soon.  The sunshine doesn't not last.  After our late lunch, the clouds roll in, with headwinds and waves and, eventually, rain.  Yesterday, our paddling through the through squalls left us ornery and sodden, so this afternoon we decide to pull ashore and wait out the storm.  We huddle on the sandy bank, curled up in our raincoats.  Twenty minutes later, the downpour eases into a drizzle and we continue downstream.

When we reach Pilis pier, across from Gelgaudiskis, we stow the kayak and walk one kilometer to the Panemunes castle.  Neither of us carries any cash, , so we pass on the five euro, cash-only castle tour. Instead we walk, gratis, through the outdoor courtyard and luxuriant grounds, relaxing amidst the beautifully-tended forest, gardens and fish ponds.  Thankfully, the restaurant on the premises accepts credit cards, so we enjoy an early dinner of borscht and potato pancakes--Lithuanian latkes.  The food is tasty and, mostly, after all of our time on the river, it's a pleasure to eat a meal where someone else cooks and cleans up. 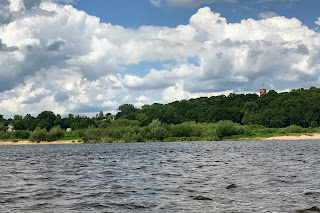 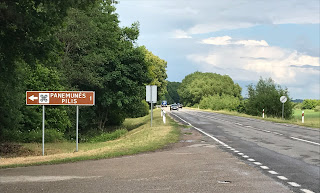 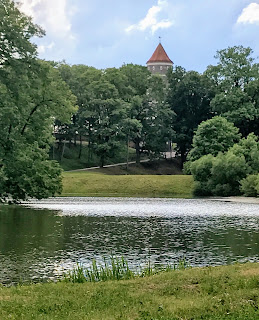 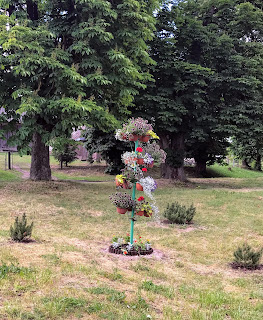 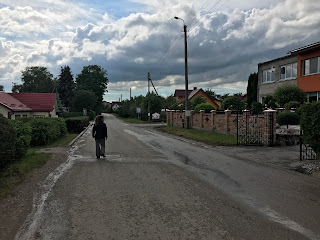 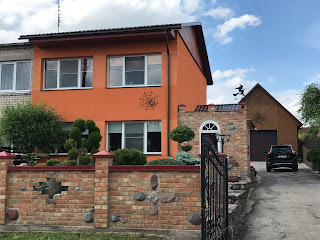 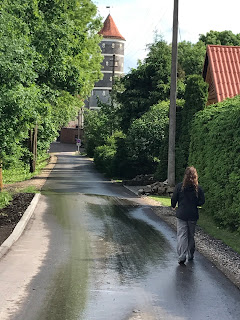 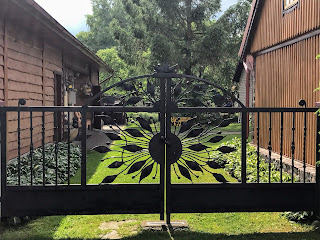 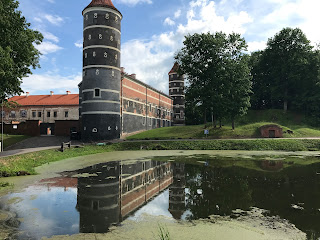 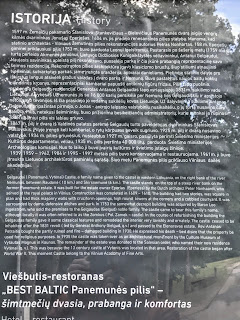 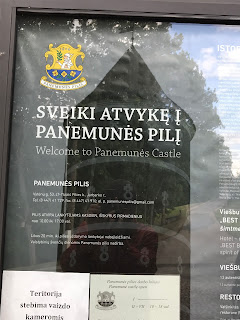 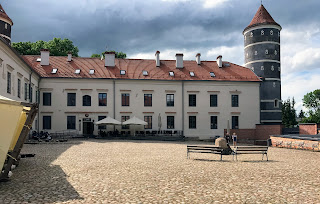 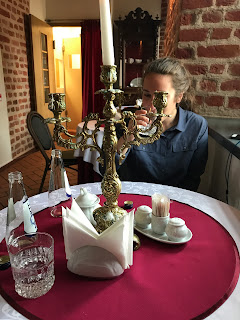 We paddle for one last hour after dinner.  It's blissful, as evening kayaking here tends to be.  The wind dies down, rosy sunlight pours in from low on the horizon, and the once tempest-tossed river is a placid mirror.  We find a cozy campsite on river left, where pitch the tent and play gin rummy on Rosa's blanket spread over our own little sandy beach.  As the Nordic summer sun finally sets, clouds of condensation roll up from the river and a raucous chorus of bullfrogs joins the regular choir of cuckoos to sing us to sleep.

Tomorrow, on to Jurbarkas for our eagerly-anticipated Shabbat rest. 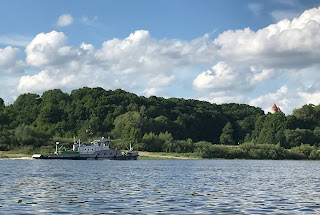 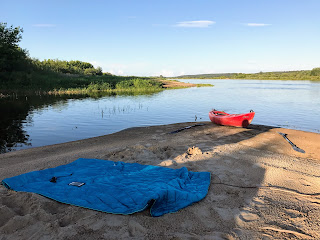