Today is Shavuot, Z'man matan torataynu--Season of the Giving of our Torah.  Our tradition teaches that we all stood at Sinai, that every generation, past and future, received the Torah there, side by side.

So today I will be with Rabbi Mendel and Toba Nakka Kagan Finkelstein.  With Shimon and Hannah, Judel and Feige Rivke.  With the thousands murdered in these woods, by the banks of these rivers. With those who lived and worked and loved and prayed and agitated here in Lita for five centuries. With my grandfather, Rabbi Joseph Fink, and my Oma, Janice Gutfreund Fink Denver.  With my Grammy and Papa, Inez and Ray Hoffman.  And with my father, Rabbi Arnold Fink, z"l, who inspired this journey.

The road to Sinai was strenuous, through fire and water and wilderness.   For the Israelites, newly freed from Egypt, Torah was a hard-earned gift.  Perhaps it's fitting, then, that Rosa and I do not have the luxury of an easy day.

We begin well, as we duck and slide like limbo dancers beneath a downed tree spanning the width of the canal.  This passage boosts our confidence--but not for very long.  The rest of the morning's paddle through the narrow channel turns into a slog, arduous at its best and more often bordering on miserable.  The weather is blustery, grey and damp, with rain on and off.  And the blockages come so fast and furious that we once again find ourselves out of the kayak more than in it.  We're almost constantly stuck, barricaded by storm-felled trees that clog the stream and collect heaps of garbage: bottles, paper, shards of wood.  With all this wading waist-deep in muck, we're chilled to the bone, and soon we're also hungry, hurting,  frustrated and short-tempered.

We finally reach the canal's end and enter the Nevezis around 1:30.  It will be our home for the next week, past Kaunas until its confluence with Lithuania's largest river, the Nemunas.  Thankfully, the water level here is much higher than on the canal..  Exhausted from the morning's trials, we paddle just a few hundred yards, then pull out onto the left bank, below a field smelling of fresh manure, for some food, rest, and rejuvenation. 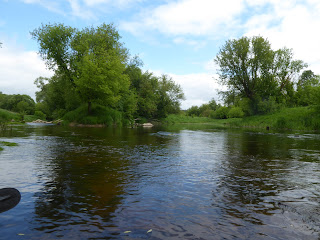 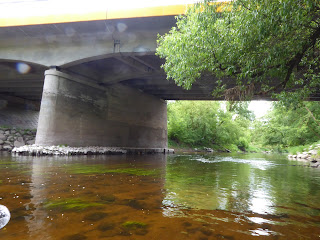 As a rule, we don't cook at lunch.  We eat bread with cheese or peanut butter and jelly, with nuts and fruit.  Thankfully, though, we have a couple packs of ramen noodles stocked away for days like this. Weary and shivering, we need to ingest something hot.  We change out of our soaked clothing, into bathing suits and raincoats.  The coats warm and protect our upper bodies; we decide to go with the bathing suits because when getting wet is inevitable, it seems better to let the water roll off the skin than cling to soggy pants.  We quickly boil up some water for the ramen, which really revives us, along with hot tea mixed with a shot of mead liquor for additional warmth.  After about an hour's break, we feel decidedly better.  Not great, mind you, but sufficiently toasty and rested to continue downstream.

The Nevezis begins north of here, then passes through the city that bears its name, Panevezys.  I chose to start on the Levuo and connect via the canal because I didn't want to paddle through Panevezys.  It's one of Lithuania's urban industrial centers, mostly drab and uninspiring.  We drove through town on our way to Kupiskis, and as we passed, I did not regret my choice of routes.  Still, it is worth noting that Panevezys--or in Yiddish, Ponevezh--has a long and rich Jewish history.

Before there were Jews in Ponevezh, there were Karaites, who came to Lithuania from Crimea at the invitation of Grand Duke Vytautus in the late fourteenth or early fifteenth century.  Karaites practice a kind of biblical Judaism, following Torah law quite literally while denying the authority of the Talmud and rabbinic tradition.  Here in Lithuania, most of the Karaites settled in Trakai, where a small community still remains.  The story of their relationship with the rabbinic Jewish Litvaks is long and complicated, sometimes cordial, sometimes not.  I do not know how the Karaites of Ponevezh responded when rabbinic Jews began to settle here in the early 18th century.

But by 1884, Jewish Litvaks were the dominant group in town, with a community of 7,899 out of a general population of 15,003--a clear majority.  Most were shopkeepers and merchants, but there were also all sorts of craftsmen: carpenters, leather workers, watchmakers, potters, porters, dressmakers and more.  And, of course, rabbis and teachers.

They all lived in fear of urban fires, which were common here and throughout Lithuania.  In an age of ramshackle wood structures with open stoves and hearths for heating and cooking, that was inevitable.  In May of 1881, over half of the Ponevezh, including its synagogues, went up in flames. And when fire didn't threaten, there was also ice: in the spring of 1888, floating ice blocks destroyed the bridge over the Nevezis.

In Ponevezh, as throughout Lita, religious life centered around the kloiz (synagogue/prayer room) and the bet midrash study hall.  And here, too, each kloiz was mostly populated by members who shared a trade: butchers, bakers, artisans, etc.  Clumped together, these prayer halls would form a shulhoyf, a courtyard full of small synagogues.  There were other Jewish institutions: burial societies, bikkur cholim groups in charge of visiting and caring for the sick, associations organized for the assistance of poor brides and orphans, and free loan societies.  Zionism was strong here, too, as was the workers' Bund.

One of the most renowned Jews with a tie to Ponevezh was the poet, Y.L. Gordon, who taught here from 1853-60.  An early Hebrew writer of the Haskallah, in his youth he famously urged his Jewish brethren to publicly assimilate: "Be a man in the streets and a Jew at home."  He later came to regret this position as he witnessed his Jewish friends and neighbors abandoning the tradition en masse.

Gordon remains a complex and fascinating figure.  What would he make of Rosa and me, following in his footsteps all these years later, with our American identities interlaced with our Jewishness? What, for that matter, would Judel and Mendel and Toba Nakka Finkelstein have thought of us?  My grandfather, Rabbi Joseph Fink, certainly embraced Haskallah values.  He was a classical twentieth century American Reform rabbi, a modern man, through and through.  What was his relationship with his Old World Orthodox father?  Joe left home at thirteen and rarely visited.  My father never met his grandfather.  Even my German-Jewish grandmother, Janice Gutfreund Fink Denner only met her father-in-law once, extremely briefly, in all the years that she and Joe Fink were married.  Here in Lita, so many identities and ideologies divided us.  They still do.  Tradition and modernity, Orthodoxy and secularity, conservatism and liberalism--all of these tensions that still fracture the Jewish world are rooted here.

Ponevezh emerged as a major Jewish center in the twentieth century, with the establishment of a renowned yeshiva in 1919 under the leadership of Rabbi Solomon Kahaneman.  It soon became a leading light in the ultra-Orthodox yeshiva world--and remains so today, from its home in B'nai B'rak, Israel, where Ponevzher Rav Kahaneman had the foresight to move it just before the Shoah.  A famous Musar scholar, Rabbi Eliyahu Dressler, also taught there.  Today, with over 1,000 students, it is arguably the leading Litvak-style yeshiva in Israel.

In the end, over 90% of the Jews who did not leave Lithuania before the Holocaust ultimately perished in that conflagration, along with most of the institutions that they created and served.  The Germans entered Ponevezh on June 26, 1941.  In July, they set up a ghetto and in August, together with their Lithuanian accomplices, began to murder the region's Jews in the woodlands near Pajuoste. By August 23, over 8700 Jews lay dead beneath the forest floor.

All of this is upstream, in time and space.  Today, south of Panevezys, the Nevezis River runs clear and warm and beautiful, and we are so thankful for the abundant flow.  We are making much better time.  Occasionally, the sun even peeks through the damp, gunmetal skies. 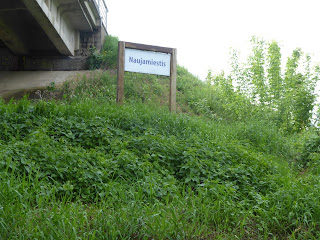 Our last stop of the day, around 4:00 pm, comes at Naujamiestis--or, in Yiddish, Nayshtot-Ponevezh--fifteen kilometers south of Panevezys.  We pull out just after we pass beneath the town's primary bridge across the Nevezis.  I want to explore the village and search for the old Jewish cemetery, but the steep bank is densely carpeted with stinging nettle, so we do not wander far.  Still, on this Shavuot day, I stand by the riverside and chant yizkor for the small Jewish community of Naujamiestis/Nayshtot-Ponevezh, who died with the others in the Pajouste forest.

I share with Rosa one last story of this town--perhaps the most heartbreaking of all.  It comes from the local Jewish history recorded in Pinkas Kehillat Lita:

A Jew of Naujamiestis, Shmuel Feifert (1922-1948) was a soldier in the Red Army.  He left when the army retreated and, after the war,  returned to his hometown. Having discovered that none of his family members remained alive, he devoted his life to creating a memorial on the mass graves at Pajouste, and to retrieving Jewish children from the Christian families who took them in, in order to bring them back to Judaism.  He brought fifteen of these children to the Jewish orphanage in Kaunas, often paying off their Christian rescuers with his own money.  In 1948, between Rosh Hashanah and Yom Kippur, he went to Rietavas, near Telsiai, in order to retrieve another child from an adopting family--and was murdered there by Lithuanians.

How can this be?

How can one even imagine such a thing?

Shmuel Feifert lives through the war, dedicates himself to saving the tiny remnant of Jewish children who somehow survive the Shoah--and is killed for his efforts.

How is this possible?  If only the Nevezis river could speak--what would it say about the horrors perpetuated along its now peaceful banks?

What to make of humankind?  We are capable of such decency, such beauty, such heroism like that of Shmuel Feifert.  And such inconceivable atrocities.  Not just the Shoah.  America, too, has its shadow history: slavery, Native American genocide, cruel bigotry and exploitation of immigrants and other vulnerable populations.  Just a few months ago, we elected a narcissistic bully as our president and suddenly the horrors of the past feel way too close for comfort.  How to explain humanity?  We who can summon up either the courage to risk our lives for strangers' children--or the callousness and cruelty to murder them?

As the Talmud teaches: Teku--Let Elijah the prophet settle this one!  There's no good answer to this quandary,  at least until the messiah shows up to resolve what's incomprehensible to us.

We make camp shortly after six, on a little spit of sand near the hamlet of Murmuliai.  We cook up some rice, add a packet of unidentifiable but tasty spices, then hasten into the tent as the wind and rain kick up.

How incredibly lucky we are to be safe and sound, with shelter in the storm.  Our tent walls are so thin, a matter of a millimeter or two.  Yet they protect us from the elements with astounding efficiency, making all the difference between comfort and misery.  I am deeply thankful to be out of the elements.  I don't have answers to the big questions.  But I am grateful for small things.

As this Shavuot day draws to an end, huddled in my tent, I ask myself: How can I, one tiny person in a sea of humanity, be a source of shelter to others?  How can I hear the Voice that resounded at Sinai, here and now? 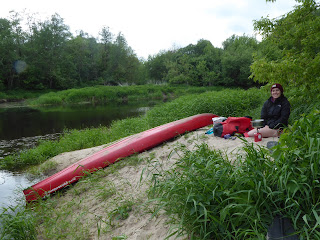 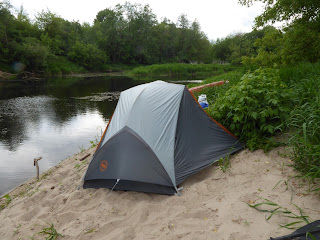 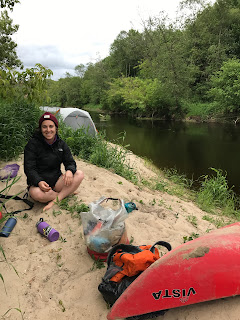