It rained all night, and continues through this morning.  We'll be packing our gear wet, and paddling wet, too.  Still, we're excited that the weekend is coming, and tomorrow, if all goes according to plan, we'll arrive in Keidainiai, with its promise of Shabbat rest in a warm, comfortable bed, with clean laundry and a hot shower.

Thankfully, the rain eases and by mid-morning, it's partly sunny.  The paddling goes smoothly until around noon, when we unexpectedly arrive at yet another dam, by the site of an old mill.  This one definitely didn't show up on our map, and we weren't really ready for it. "Damn uztvanka," we mutter grumpily.  If nothing else, we've learned the Lithuanian word for "dam."  I'm nervous about how quickly--and how much--water is pouring over it, and suggest we portage around.  Rosa disagrees. She wants to haul the boat and gear over the top, but she reluctantly concedes to scout out both banks for portage trails.  We look around, left and then right--and find none.  So I follow Rosa's lead and over we go, boat first, lined on the rope, then the two of us right behind it.  Looking back from below, we see a powerful plume of white water shooting down the left side of the dam--the most we've seen on our entire journey.  I'm glad we didn't go that route; it's way more than we could handle in a tandem touring kayak without spray skirts. 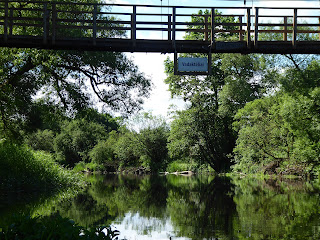 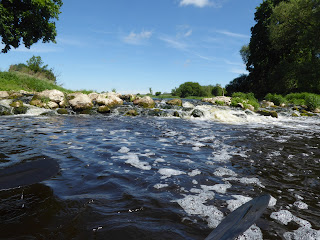 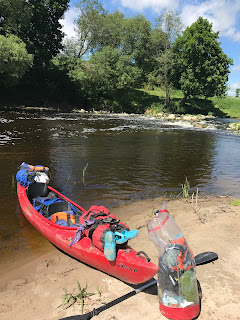 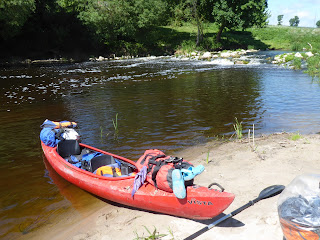 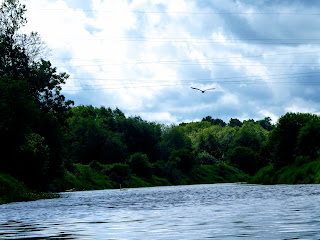 The afternoon is, for the most part, pleasant--sunny, plenty of water in the stream, no more dams or obstacles. But a great deal of paddling.  This is easily the longest river trip I have ever taken, and my lengthiest outdoor excursion of any sort since I was considerably younger. I'm fatigued.  My butt and shoulders ache and I'm still feeling a little sick.  Nonetheless, I think I'm holding my own, slowly growing stronger, both mentally and physically. 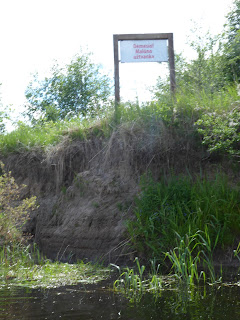 Toward evening, around 6:00, we strike upon one more dam.  But  Rosa and I are getting better at this with each experience and we handle this one with relative ease.  Meanwhile, we make two stops in the Krekenava area.  First we take a breather in bucolic Krekenava Regional Park, which celebrates centuries of human settlement in the Nevezis River valley.  Rosa climbs to the top of a high observation tower; I'm scared of heights, so don't get far.  Still, it's a pleasure to walk around on the manicured grass, stretching our kayak-cramped legs.  Unfortunately, we don't make it to the most famous feature in Krekenava Regional Park, which is just too far from the river: the Pasiliai Bison Range.  It is home to a herd of auroch, or European bison, the largest land mammals on the continent. Bison were widespread across Europe until the 16th century, when human agriculture, population growth and intensified hunting almost rendered them extinct; indeed, until fairly recent they were extinct in the wild, living only in protected reserves such as this one.  But through captive breeding, the wildlife managers have maintained and even grown the population.  The aim of this park is to restore the bison to their natural habitat.  There are now fifty bison in Lithuania, some on the reserve and others in the wild.  As the park brochure notes: "During thirty-five years of operation, 140 calves were born in Pasiliai's bison paddock. . . Now tourists from Lithuania and other countries come to see these animals with their own eyes."

Although we do not see the bison, as we paddle and hike through Krekenava Regional Park, I spend a lot of time  thinking about them.  I cannot help but draw parallels between their story and the history of Jewish life here: once we were populous, then hunted to virtual extinction, after which folks come to realize the tragic loss and try to restore something from a tiny surviving remnant.  Pasiliai is a modest success story--but large herds of bison will never again roam free across Lithuania.  Nor will Jewish Lita be reborn.  Some catastrophes cannot be undone, even with the best of intentions.  We are left with a token presence, a ghostly reminder of a world that once was, a symbol of what we've lost. It's curious to me, this tendency to fetishize, after the fact, what we've hunted and destroyed.  In the United States, we do this with Native American culture: genocide, followed by romanticized souvenirs of turquoise, beads, and moccasins.  So it is with bison.  And European Jews. 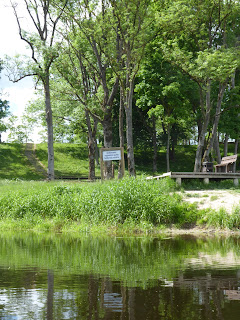 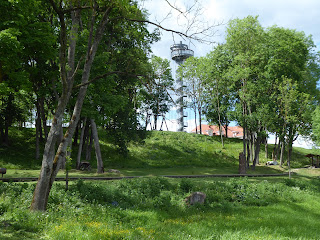 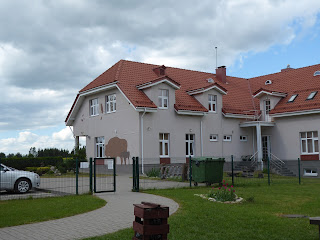 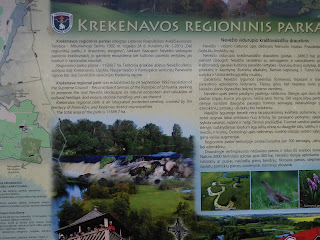 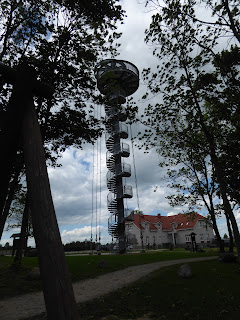 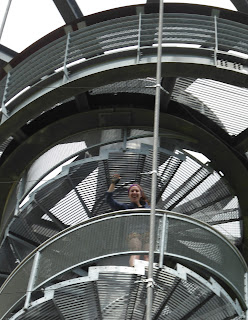 Shortly after leaving the park, we reach the town of Krekenava.  Jews settled there in the late 17th century.  For the next couple of hundred years, they dealt with the usual travails: fire, economic hardship, anti-Semitism.  Like nearly every Jewish community in Lita, they disagreed fervently among themselves: pious scholars in the shulhoyf, communists and Bundists agitating for workers' rights, Zionists on the left, right, and center.  The article on Krekenava in Pinkas Kehillat Lita notes:

Relations between the Jews and their neighbors were generally good, but here and there, some assaults did occur.  In 1929, on the road near Krekenava, thugs attacked three Jewish merchants.  A blood libel was spread against the Jews in the spring of 1936, and only because of the government's intervention were there no Jewish casualties.

The Jewish community of Krekenava's demise is, by now, all too predictable:

The young men were forced to dig pits between the stone bridge and the Nevezis River, then shot and buried in the pits they had dug.  The murderers then took the attractive Jewish young women, dragged them to a cellar, where they were raped and tortured to death. The rest were murdered in the forest of Pajuoste, with the Jews of Panevezys.

We must have paddled right past the site of the mass murder, between the stone bridge and the Nevezis River.  The bridge, it seems, is gone, so I could not identify the place.  But my notes on Krekenava indicate that there is still an old Jewish cemetery in the town, with a memorial to the victims of the Shoah.  I want to find it, so we pull the boat up on the right riverbank by the entrance to Krekenava, just below the large cathedral on the town bluff.  (Parenthetical note: This is the standard landmark of virtually every Lithuanian river town.  Invariably, an impressive cathedral occupies the high ground, towering over the homes and shops, even in the most modest of villages.  I suppose this is a function of Lithuania's religious uniformity; in America, a small town will likely have a long row of churches representing different denominations.  Here, with a few notable exceptions, almost everyone who wasn't Jewish was Roman Catholic, so a single church--usually a rather imposing cathedral--suffices). 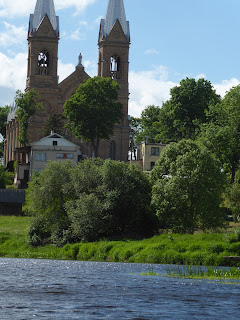 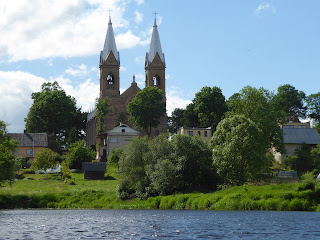 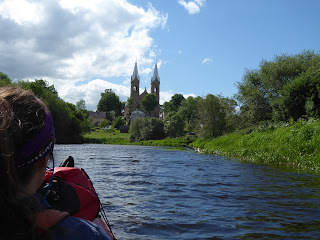 Rosa stays with the boat while I search Google maps for Zydu kapines, Lithuanian for "Jewish cemetery."  Nothing.  So I walk up the bank, across a wide field, past the church, and looked around. No sign of a Jewish cemetery.  I do find a sprawling Catholic graveyard, with the most ornate tombstones I've ever seen.  Each is unique, carved out of extravagant speckled marble and granite with intricate designs, lettering, and pictures.  No mistaking this for a Jewish cemetery, with our smaller, simpler stones.  I stroll through, noting that here, as in all old cemeteries, there are too many children, and young women who likely died in childbirth.  Then I return to the boat and we paddle on. 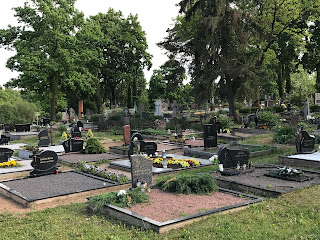 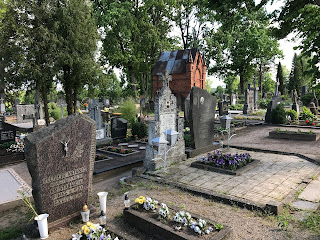 As the summer solstice draws near, the daylight just gets longer and longer.  The sun now sets shortly before 10:00 pm, followed by a prolonged dusk that lasts until close to midnight, with sunrise again around 4:00 am.  It's never really pitch dark; even when I have to leave the tent for a bathroom break at 1:00 or 2:00 in the morning, I don't need a flashlight.  With such lengthy days, it's easy to paddle late into the evening.  Tonight, we push on until after 8:00, when we find a splendid campsite--an actual, designated campsite--with a fire pit and picnic table, just outside Surviliskis.  We're exhausted. It was a long day, so we move swiftly and efficiently this evening.  I set up camp while Rosa prepares dinner (this is getting to be our standard procedure--I'm the homemaker, she's the cook).  As twilight descends, I call Janet on my cell, then tuck comfortably into my sleeping bag. 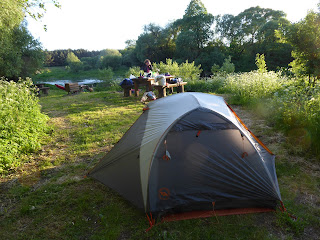 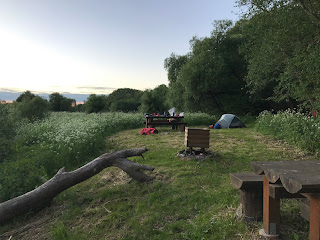 Like most of the local villages along the Nevezis, Surviliskis once had a Jewish community, known in Yiddish as Survilishok (there is a pattern here: all Lithuanian place names ending in iskis, when translated into their Yiddish variant end in shok.  Kupiskis becomes Kupishok, Surviliskis is Survilishok, etc).   Many Lithuanian shtetls--including Survilishok--were renowned for their wooden synagogues and schools, whose interiors were often  painted with bright folk art images of the regional flora and fauna.  In the late nineteenth and early twentieth centuries, most of the local Jews either emigrated to the New World, or moved to Kovno and Vilna.  Few still remained when the Germans conquered the town in the summer of 1941; those who did were executed in the nearby forest.

A last note for the evening:

Looking over my journaling of the past week, I realize that I've drawn much of my writing from the encyclopedic entries on local Jewish communities in Pinkas Kehillat Lita, which I saved on my I-Pad back in Boise for easy reference during this trip.  Perhaps I've borrowed too liberally from these passages, at the expense of more sharing of my own reflections, thoughts, and feelings.

I think there are two reasons for this.

First, the paddling itself has been more arduous than I expected.  My body and brain are both well-wearied by day's end.  I don't have the energy to reflect as much as I would like.

Second, the journey is a little overwhelming, emotionally as well as physically.  Impressions come faster than I can assimilate them.  I'm hoping that in the coming weeks and months, with more time and perspective, I'll continue to process what I'm taking in each day here in Lita.  In that sense, I pray, the expedition will go on long after I'm home.

For now, I'm doing my best to share our pilgrimage despite my limitations. I know that my words fall short;  I hope they will suffice. 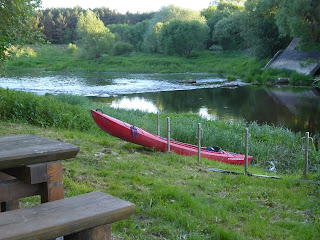 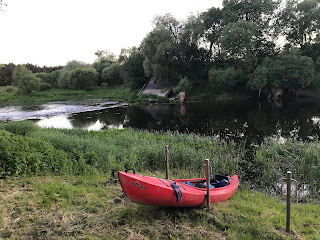