Upstream 21: Reviving the Dead (Monday, June 5, Neris River, near the confluence with the Nemunas)

Pouring rain all night, tapering to a light drizzle in the early morning.  Our breakfast--oatmeal, as always-- is even soggier than usual.

We break camp and hit the river by 9:45, which is a pretty good start for us.  I am not a morning person.  We paddle steadily, with just one short break, until 1:30.  Our endurance is improving. Dense grey clouds envelope us all along the way, but for the most part, the rain holds off.

Yet last night's downpour takes its toll, making for one more frustrating high tech failure.  As we arrive at the day's first milepost--the highway bridge that marks the  halfway point between Keidainiai and Kaunas--I reach for my portable camera, which I routinely stow in my dry bag's external pocket.  It's soaking wet.  I realize, much to my chagrin, that I forgot to zip it before bed last night, and it has filled with rain water.  Damn!  I frantically try changing the battery and drying everything off, but it simply won't turn on. Futility.  My excellent travel camera has gone the way of the water wand.  I curse and moan and I'm tempted to say that luck is not treating us well this week, but in the end, I can't really blame any of this on bad luck.  It's my own damn carelessness.  I left the wand in its sopping case.  I bought the wrong propane canister. And I failed to properly seal my dry bag on a stormy night.  I hope I can salvage the SD card, with all of my pictures up to this point.  At least I still have the camera on my phone, which I'll have to use from here on out.

**********
Around 1:30, we stop for lunch outside Babtai, a small village perched on a forested bluff above the river's left bank. Lithuanian tax documents show that my great great grandfather, Judel Girsch Finkelstein, was living in Babtai in 1874. I'm not sure what brought him here.  He spent most of his life in Kovno, where he and his wife, Feige Rivke raised their children in the 1850s and 60s, and when he set sail for America at age eighty two with his daughter and son-in-law, he left from there. But thirty years before he came to New York City, he lived in Babtai.  It's now a bucolic, peaceful place.

As it turns out, Babtai--Bobt, in Yiddish--is one of Lithuania's oldest villages.  From the start, it was a way station on a popular logging route; boats and rafts would row by en route to Prussia, just as we are doing now.  Babtai prospered in the mid-nineteenth century, with the opening of the paved Kaunas-Riga road, which passed through town.  Local Jewish lumber merchants thrived; perhaps Judel Finkelstein taught their children in Bobt's bet midrash.

Yet as the twentieth century approached, Babtai's heyday passed.  Jewish residents here, as everywhere, emigrated to the US, Palestine, and South Africa.  Fires plagued the city; in 1930, most of the town burned down.   By the beginning of World War II, only 40 Jewish families remained, and they relied on the services of the rabbi from Keidan.  Babtai's mayor, a cruel anti-Semite, presided over the murder of 83 Jews from  across the region on August 28, 1941, after first extorting them for money.

They were buried in pits on the bank of the Nevezis, probably not far from the spot where we eat lunch.

I am so fortunate that my family--Judel and his children--left for America a generation earlier.  If, under a different combination of luck and circumstances, they had chosen to remain, I would not be here today.

God of Mercy, who dwells on high, grant perfect rest beneath the shadow of Your wings, to the souls of the departed. . .

We leave a small, smooth stone on the river bank for the dead.

May their souls be bound up in the web of life.

We pack up and paddle on downstream, toward Kaunas.

The afternoon brings perhaps the toughest paddling stretch of our entire trip.  We hit a series of sluggish meanders, followed by long, nondescript straightaways, with  dank, ferocious  headwinds howling upstream.  We're on a kind of riparian treadmill, paddling with all of our might just to maintain our place. The water feels dense and viscous, like we we're stuck in a bog.  Since the Kedainiai dam, the Nevezis has seriously stagnated; it's now, essentially, a long, narrow lake with almost no trace of current.  Every time we finally  reach the end of a straightway, after an endless, arduous, painful effort, we turn, hopeful for a moment, either right or left--only to forlornly behold the same repeated sight: a hideous collection of radio towers we've been seeing since before Babtai. Whenever it seems we might pass them, there they are, somehow still in front of us, like giant upthrust middle fingers taunting us, defiant maledictions from the spiteful earth.  When, after at least an hour of excruciating effort, we finally put those ugly, malevolent metal masts behind us, we whoop with joy and exhaustion and, turning briefly upstream, curse them back before continuing along our way.

Things get better from there.  We take a break, eat some dry fruit and pumpkin seeds, and I jump into the river for a quick bath, which revives my sagging spirits.  The wind even dies down a bit.  Then the sun peeks out and though the water remains stagnant, our last couple hours of the day pass more easily.  Giddy from fatigue, Rosa and I can't stop joking about the name of a small town we pass along the way: Murmuliai. We decide that it's an ideal appellation for a collective of diminutive, long-haired  rodents (singular: murmul), eaten as a delicacy by the locals and, according to some esoteric Lithuanian Talmud scholars, the only mammal that does not lactate and is therefore considered pareve and permitted to be consumed with cheese.  We laugh and laugh about murmuliai cheese burgers; things get pretty silly at the end of a rigorous, soggy day on the river battling headwinds and no current!

Evening is often the nicest time to paddle here, with gentle breezes and crisp, shining skies.  More often than not, even on overwhelmingly bad weather days, eventide sweeps out the storm clouds, the waves ease away, and the afternoon's frustration dissipates into a sense of luminous tranquility.

We make camp in a mowed field, gorge on our new favorite comfort food--cheesy polenta--and dry our gear. Other than my camera--which is permanently out of commission--everything is looking up. At day's end, life is good.  We're healthy, we've got more than enough food, a comfortable tent and warm sleeping bags, and we're right on schedule, despite our battles with wind and water.  We should, God willing,  hit the confluence with the Nemunas fairly early tomorrow. 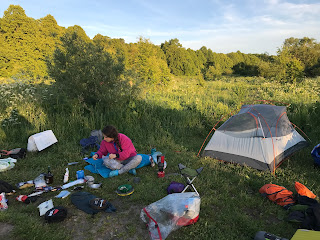 In this morning's davening, I focused on the second blessing of the Tefillah, especially the closing line: Baruch atah. . . m'chayeh ha-metim--Praised are You, Eternal One. . . Who revives the dead. Over a century ago, the Reform movement, with its deep rationalist skepticism over bodily resurrection, changed the wording of this passage to M'chayeh ha-kol. . . Who gives life to everything.  Rabbis Joseph and Arnold Fink--my grandfather and father--both followed the classical Reform approach and prayed the blessing accordingly.  They were thoroughly modern men, whose secular knowledge and faith in science left no room for such fantasies as God reviving the dead.   Yet I prefer the traditional formulation and daven with the words that my Lithuanian ancestors embraced. I do not know if Judel and Mendel Finkelstein took this teaching literally; I definitely don't.  Like my father and grandfather, I do not anticipate God resurrecting my corpse on a forthcoming messianic day.  I don't accept that kind of Divinity or messianism and I am decidedly agnostic about any sort of life after death, even at a purely spiritual level.  But I read the traditional words metaphorically, and as poetry, they inspire me.  As we paddle down this river, every day I see new life being born out of the dead and dying.  Young plants take root and grow in soil composed of expired organisms. Ancient trees make way for fledgling saplings.  And when Rosa and I totter on the brink of utter exhaustion--dead, as it were, to the world-- a small thing like a quick river bath, a warm snack, or even just an afternoon water break can, almost miraculously, quicken our spirits.  I've also seen my share of seemingly moribund relationships strikingly revived.  Commenting on M'chayeh metim, the Rabbis say that we should offer this blessing for the resurrection of the dead any time we're reunited with a friend or loved one that we have not seen in thirty days. That's timely for me on this journey with Rosa, from whom I am often separated for many months at a time. What a privilege it is to have these precious days together!

Finally, I chant M'chayeh metim with special fervor on this journey, because resurrection--taken metaphorically--is the driving force behind our upstream pilgrimage.  I want to renew the story of my family's past, for myself and my loved ones; to revitalize long lost bonds with this land and the landsmen who lived here; to rekindle Lithuania's Jewish legacy for those who now dwell in the cities and towns that once bore their labors, hopes, and dreams.

Praised are You, Eternal One, who revives the dead. 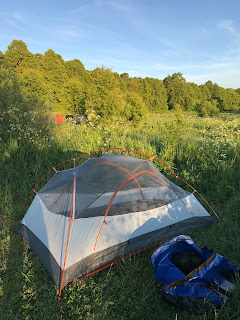