Upstream 20: The Rivers We Carry With Us (Sunday, June 4, near Paliepiai, between Keidainiai and Kaunas on the Nevezis River)

We had a short but productive morning in Keidainiai before setting out: I bought additional data for my phone, replaced a lost wristwatch, and re-stocked our kitchen bag with a new canister of fuel and a six day supply of food.  Around 1:30, we called Gertune and took a cab over to get the boat.

. . . And hit the river around 2:30, after an easy, river-left portage around the Keidainiai dam.  We are most grateful to Gertune and her family for keeping our kayak and gear; they even insisted upon helping us with the portage around the dam.  One more positive experience with the locals, whose assistance is so essential to our journey. 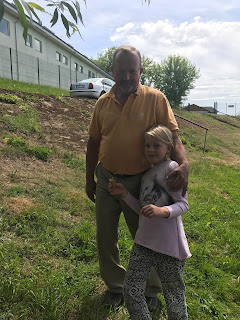 The afternoon began with bright sunshine, but soon turned grey, with light rainfall on and off into the evening.  Thankfully the breeze was gentle, so we made decent time paddling.  Alas, below the Keidainiai dam, the Nevezis has no real current to speak of; the water is lake-like, placid and smooth as glass.  Given that Keidainiai is only 88 feet above sea level, that doesn't leave much grade to generate significant current between here and the Baltic Sea.  Even the banks are getting gentler and the river is just. . . lazy.  It reminded me a bit of sections of the slow, coastal southern Virginia rivers that I paddled in my youth.

Alas, we soon realized we had another problem when the time came to purify some water with the ultra-violet wand we've been using for this task over the past two weeks. Turns out we left the wand in a soaking wet case in the hull of the boat in Gertune's garden shed over the weekend--and now it is not working at all.  Apparently our water wand doesn't like being stowed away in too much water.  Rosa and I both fiddled with it, and we tried recharging--to no avail.  It's dead.  This means that, at least for now, we'll be doing our purification the old-fashioned way, by boiling.  It's tedious and burns a lot of fuel.  At least we have a fresh propane canister.

In the evening, we had a difficult time finding a campsite but finally settled for a weedy, buggy patch that will have to suffice.  We pulled in around 7:30, set up camp, and figured to boil up a bunch of water for drinking tomorrow.  That's when the day's second technological glitch of the day struck: as it happens, the new propane canister  I bought this morning in Keidainiai does not quite fit our MSR stoves.

This is not a good start to the week.

So, practically speaking, we're now down to one small canister for cooking and boiling/purifying all of our water for the next six days.  I think that when we arrive at the confluence with the Nemunas, outside Kaunas, one of us will have to go into town to find a camping store, where we can purchase a new water purification device and the proper fuel canister.  Oh well.  Such glitches are part of the nature of pilgrimage.  They build character and make for better stories.

For now, Rosa fried up some excellent quesadillas, a meal that's economical on both fuel and water.  We devoured them, then retreated to the tent when the rains came.

Reflecting back on the weekend in Keidan, I think of the beginning of a poem written by the late Montana poet Richard Hugo for his friend James Wright:

The Towns We Know and Leave Behind, the Rivers We Carry with Us

I forget the names of towns without rivers.
A town needs a river to forgive the town.
Whatever river, whatever town--
it is much the same.
The cruel things I did I took to the river.
I begged the current: make me better. . .

We've passed through so many towns along the Neris, the Levuo, the Nevezis.  My family's towns: Kovno, Keidan.  Towns once full of Jews--even the tiny hamlets.  Tomorrow we should paddle through Babtai, where Judel Finkelstein lived for a time according to local records, circa 1874.  We American Jews think of ourselves and our tribe as city-dwelling urbanites.  But here, every little shtetl had a significant Jewish community.

The rivers may, as Hugo suggests, forgive the towns.  And the townspeople.  Because that is, essentially, what rivers do, effortlessly.  They flow on, regardless of the atrocities happening on their shores.  They go to the sea, no matter how much blood spills down their banks.

For us, humans, it is not so simple.  Forgiveness is hard, and complicated.  Still, I believe that the rivers have much to teach us: