I wake up, grab a quick breakfast, then catch a taxi to the Choral Shul, the only functioning congregation in Kovno.  Before World War II, there were almost forty synagogues here, usually organized around trades--a Kloiz (congregation) for tailors, for masons, for petty merchants, butchers and bakers and the like.  The Nazis destroyed all but one--the grandest synagogue, attended by wealthy, stylish Enlightenment Jews.  Built in grand, neo-Baroque style in 1872 and financed by the successful merchant Lewin Boruch Minkowski, it was used for worship and also for large cantorial concerts.

I walk in and look around the sanctuary.  The bimah is renowned for its beauty, and it lives up to its reputation--but no one's there.  Instead, an elderly gentleman walks over from a corridor near the entryway and greets me in Hebrew.  He asks if I am here to pray.  I answer: "Ken--Yes" and he leads me into a tiny side room, where seven older men are just beginning the Shabbat morning service. They handed me a siddur, inquire if I am Jewish and whether I've come to daven with them.  Then they ask: "Do you know how to lead the service?"  When I reluctantly nod, yes, a man directs me up to the shtender, the podium in front of the ark, and requests that I serve as shaliach tzibur, the prayer leader.

I assume they are being polite and wish to honor me with a brief part, that I will now lead a short section or two of the introductory prayers.  I am, indeed, feeling deeply honored and very moved, leading birchot ha-Shachar, the morning blessings, in the same city where my great great grandfather, Judel Finkelstein taught Torah and his son, Mendel, studied with giants like Isaac Elchanan Spektor. Unbelievable: Here I stand, thanking the Holy One for making me free, for creating me as a Jew--in the heart of Kovno in 5777/2017!

I finish davenning this section, arrive at P'sukei d'Zimra, the psalms of praise--then turn to sit down.   But the gathering insists that I continue.  So I daven on, with and for the community: Kol HaNishama t'hallel Yah--Let the soul of all that lives sing praise to the Holy One!  All that lives, indeed--even if only a tiny fragment of the glory that was once Jewish Kovno.  Again I move to sit back in the congregation--and they repeat: Tamshich--Continue!

So I chant Yotzer Or and Ahavah Rabbah and Emet v'emunah, offering blessing to the Holy One for creating light--and darkness--and for abiding love and truth.  I sing Sh'ma and Mi Chamocha, praising the Eternal's power to redeem us in times of trial (alas, so arbitrary, that one. . . ) and insisting on God's oneness in a world that is so badly broken.  And still, they respond: Keep going!  So in the absence of a minyan, we do  Tefilllah silently, on our own.  Then, at their request, I read the first three aliyot of the Torah portion from the Chumash, followed by Aleynu and the usual closing song, Adon Olam.  Afterwards, everyone comes and shakes my hand, offers a hardy round of yesher koach and then, the Orthodoxy of the community notwithstanding, get in their cars and drive away.

I am not shomer Shabbos in the traditional sense,  but I am decidedly car-less, so I walk away, through the streets of Kaunas' Old Town.  What a stunning experience, leading the davening in this place where my great great grandparents lived; I think it will take a long time, really, to sink in.  The morning went by in the blink of an eye, and I was so caught up in the moment,  worried about avoiding mistakes and trying to find a tune or two that they might know--with all of that going on, I could barely comprehend, let alone appreciate, the full measure of the hour as it unfolded.  Still, I am profoundly thankful for it.

I stroll around a bit, waiting to meet Rosa.  As I perambulate the streets of Kovno, I listen to a podcast of a sermon by Rabbi Sharon Brous on the portion, Behar.  Her title: "Do Not Become a Hideous Beast."  It's a reference to the Eugene Ionesco play, "Rhinoceros" which depicts the insidious ways that authoritarianism seeps into a culture and turns regular people into unrecognizable monsters. Rabbi Brous speaks of the power of the sabbatical year to serve as a counter-cultural force,  a reminder to help us resist yielding to the status quo in dark and dangerous times.  She was, of course, speaking about both the past (fascism, Nazism, Communism) and the ugliness run rampant in Donald Trump's America.   I cannot begin to describe how poignant and potent it was to hear her words here, in Kovno, where the ghetto once stood and where so many were murdered by those who did, in fact, allow themselves to become hideous beasts.

But a few kept their humanity.

After I meet up with Rosa, we head for the home of Chiune Sugihara, the diplomat who served as vice-consul of the Japanese consulate in Kaunas in 1939 and 1940.  Perched in a quiet, leafy neighborhood on a hill above the center of town, it is both lovely and unremarkable on the outside, save for the Japanese lettering on the gateway, and the lines of Japanese tourists here to honor a genuine hero.

When the Soviet Union occupied independent Lithuania in 1940, large numbers of Polish and Lithuanian Jewish refugees tried to acquire exit visas--yet virtually no countries were willing to issue them.

Sugihara decided to grant visas on his own.  He ignored legal requirements and issued ten-day visas to Jews for transit through Japan, in direct violation of his orders.  He also persuaded the Soviet authorities to allow these Jews passage across the country via the Trans-Siberian railroad to Vladivostok, where they boarded boats to Tsuruga, Japan.  Sugihara continued to write out these visas, by hand, until September 4, when the consulate was closed and he was forced to vacate his post.  According to witnesses, Sugihara was still issuing visas even after boarding the train in Kaunas station, throwing them into the crowd of desperate refugees as the train pulled out for Berlin.  In parting, he cried: "Please forgive me--I cannot write anymore.  I wish you the best" and then bowed deeply to the people.  When asked about this later, he simply noted: "They were human beings and they needed help.  I am glad I found the strength to make the decision to give it to them."  It is estimated that Sugihara issued visas for around 6,000 Jews--and today, nearly 40,000 descendants of those refugees are alive because of his brave actions.

Of those who reached Japan, some got asylum in Canada, New Zealand, Australia, Burma, the United States, Palestine, and Argentina.  Others stayed in Japan until they were deported to Shanghai, which had a large Jewish community during the war.

In 1985--45 years after the Soviet invasion of Lithuania--Chiune Sugihara was recognized by Yad VaShem in Israel as one of the Righteous Among the Nations.  He died a year later.  When his widow, Yukiko, traveled to Jerusalem in 1998, she was met by tearful survivors who showed her the yellowing visas that her husband had granted them. 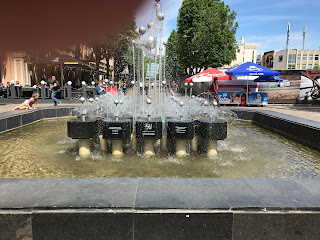 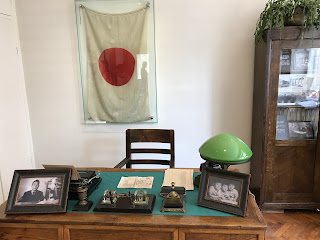 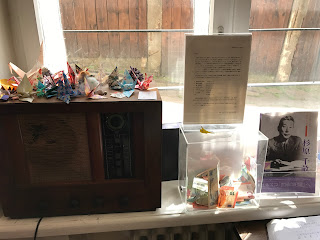 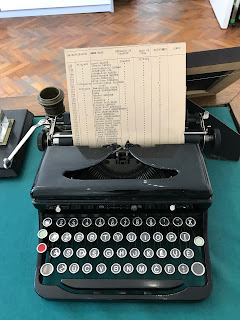 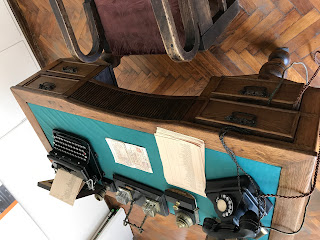 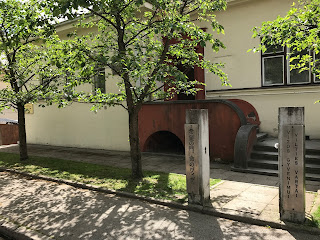 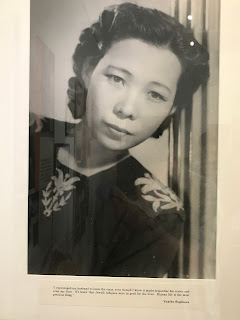 After the Sugihara house, we stop for a bite of lunch--fittingly, at a nearby sushi place.  Then we meet Jonas, our tour guide for an extraordinary Shabbat afternoon walk through the remnants of Jewish Kovno and Slabodka.

We began with the old Bikkur Cholim Jewish hospital, on Jaksto Street.  Built in the mid-19th century, it was financed by the local Jewish community and the municipality.  Like much of old Kovno, it now stands vacant. 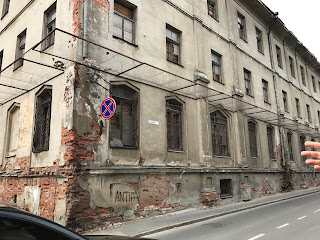 The former Bet HaMidrash, at 4 Pilies Street, is also largely run down. 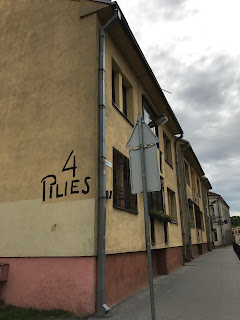 As I have noted, both here and in Vilna, most Jews affiliated with a congregation (Kloiz) on the basis of their occupation.  This was the butchers' synagogue. 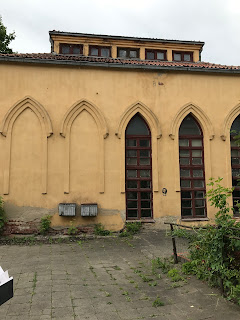 Abraham Mapu was the very first Hebrew novelist and an important proto-Zionist thinker.  He spent much of his life here in Kovno, where there is a street named after him (there are also Mapu streets in Tel Aviv and Jerusalem). 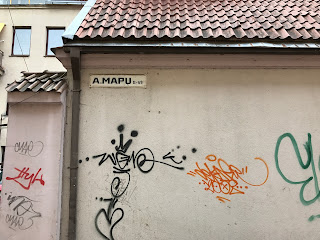 There is also a street named for Kovno resident Ludwig Zamenhof.  He grew up speaking Yiddish, Russian, Belarusian, German, French, Hebrew and Polish.  In school he studied Greek, Latin, and Aramaic and later learned some English, too.  He wrote a book on Yiddish grammar.  But despite--or maybe because of--knowing all of these languages, he decided to create his own.  L.L. Zamenhof is the father of Esperanto.

Of course the dream of a common language goes back to the Tower of Babel--and, is, of course, doomed to failure.   Esperanto remains the most widely spoken artificially constructed language in the world; according to Wikipedia, as of 27 May, 2017, over one million users have started to learn Esperanto on Duolingo.  But even before his own death in 1917, Zamenhof must have known that the world would not unify under Esperanto or any other tongue.

It's a pipe dream.

Still, this kind of grand universalist ideal, as unrealistic as it may have been, is so very Jewish.  We are, despite everything, a nation of dreamers. 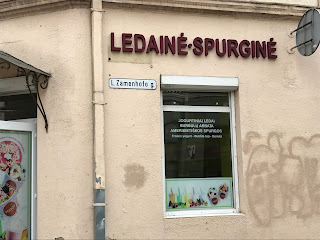 We pass an old bet midrash, a school where young Jewish children once learned their aleph-bet. During the Soviet period, it was turned into an auto mechanic shop. 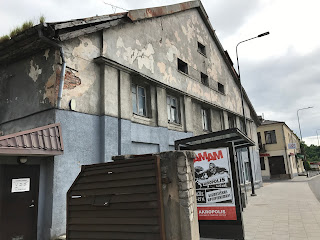 Next week, we will paddle the Nevezis River, which runs into the Nemunas on the western outskirts of Kovno.  Before it reaches here, it passes through Keidainiai (Keidan), where Judel Finkelstein was born.  Slabodka was founded by Jews from Keidan, and many years later, they built a shul in Kovno named for the Nevezis River.  The founder of the Musar movement, Rabbi Israel Lipkin Salanter taught there, at the Neviazher Kloiz, after moving from Vilna to Kovno.

So I felt a strong connection when we passed the old Neviazher Kloiz, due to my Keidan family, my admiration for Salanter and the mussar movement, and my forthcoming time on the Nevezis river. 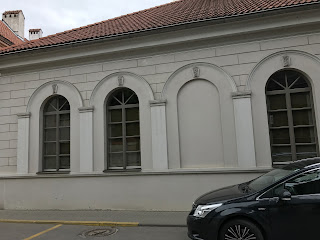 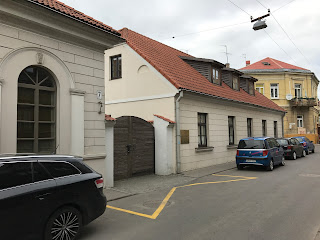